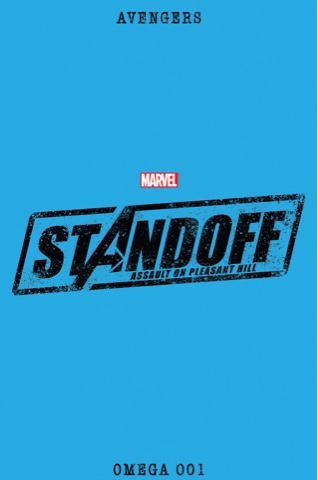 Baron Zemo is out to get the upper hand in Standoff: Assault on Pleasant Hill Omega. He’s dispatched Kraven the Hunter to trap Cosmic Cube kid Kobik in the hope of reshaping reality to match his Nazi worldview. A young-again Steve Rogers rallies the various Avengers teams to take on the dozens of super-villains just freed from the mental chains that made them think they were ordinary citizens of a perfect community.

The Standoff event running through various Avengers and allied books has been pretty decent fun, a big daft crossover that’s not too big. OK, there’s the threat of reality being reshaped but that’s just Tuesday in the Marvel Universe; what’s refreshing is that it’s been superheroes vs supervillains without zillions of non-combatants getting killed. There are a few SHIELD agents offed here, which is sad mainly because none of them are the incredibly annoying Maria Hill. She’s in this issue, in a post-battle scene that sees her threatened with losing her job by her superiors.

What she has to do to get sacked I don’t know – she’s presided over the massive failure of an off-grid operation, and her snotty attitude irks them all.
Baron Zemo has a fair few amusing lines. He shouldn’t. He’s meant to be a follower of Adolf Hitler, not a wannabe stand-up.
Is it spoiling things to say the good guys rout the bad guys? I can tell you that despite the occasional pleasures I found this issue pretty underwhelming. There’s plenty of nice dialogue. Steve makes a rousing speech. The only event of note is the transformation of SHIELD agent Avril Kincaid into a new version of Quasar, but you’d barely know it from the comic. 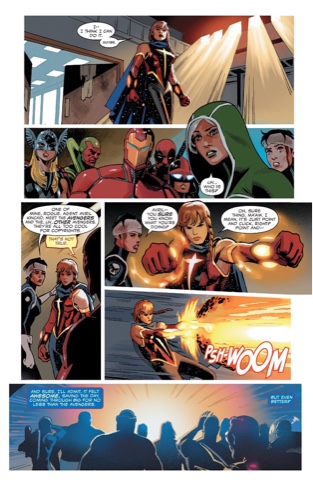 She gets no big entry splash, and if you don’t know Wendell Vaughn’s history as Quasar, you’re scunnered. Writer Nick Spencer doesn’t give any background information after Vaughn shows up looking sad, neither does he explain why the energy blasts of the quantum bands he gives Avril are more effective against a force shield than the powers of a dozen or so Avengers. Why does Wendell not wish to be Quasar? Why is Avril his successor? We’ve seen heroic identities passed on plenty of times in Marvel Comics – usually one of Hank Pym’s – but there tends to be a character arc involved. All we’ve seen of Avril is that she was an agent in Pleasant Hill and she tells us she wishes to be a hero.
Zemo having been dealt with by Kobik, the book winds up with another big Marvel villain declaring that he’ll succeed where the baron failed. He’s hidden in shadow for a few pages, so is obviously being held back as a surprise – but his daughter is on panel calling him ‘Father’ and we’ve seen him in daylight earlier in the book. It’s all very strange. 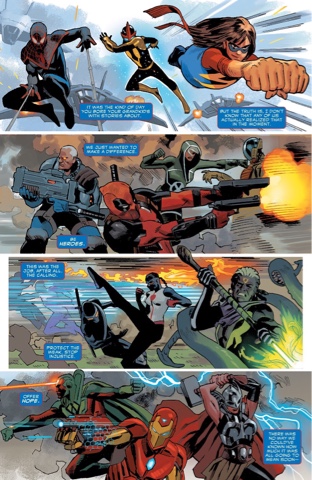 The art by illustrators Daniel Acuña, Angel Unzueta and colourist Matt Wilson is easy on the eye. There are a few good skirmish images, but what Spencer fails to give them to draw are individuated moments among the greater conflict. One-on-one run-ins between heroes and villains showcasing powers and personalities, the type of fight scenes that helped make Marvel great.
The book does have one great image… 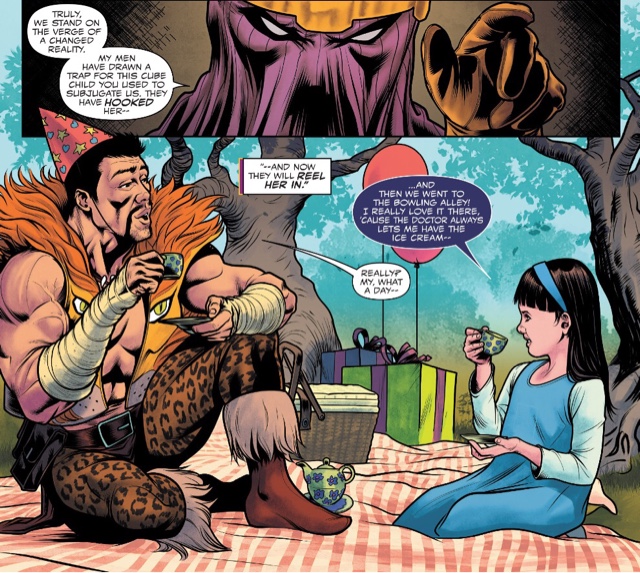 … and I’m looking forward to the Thunderbolts series spinning off from here hugely, but for a crossover bookend I want more. More than a ‘this is OK’ feeling. Heck, an actual cover image would’ve been nice rather than a boring block of blue to complement the boring block of yellow that fronted the other Standoff bookend.
If you’ve not been buying the crossover, but have a subscription to Marvel Unlimited, you can start reading it in about five months. It’s a pleasant time-passer, you’ll likely have some fun. But I honestly can’t recommend paying Marvel prices for something that could, and should, be a lot better.