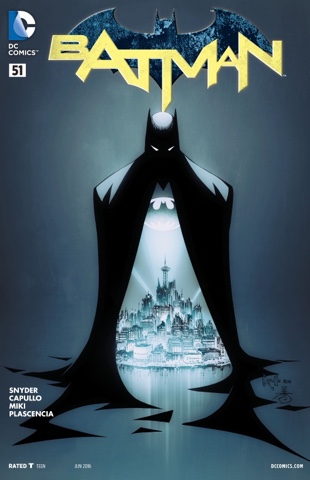 Gotham is…
The elliptical phrase is an invitation to readers of the Gotham Gazette to sum up the city in just a few words. We hear several responses in this issue marking the end of Scott Snyder and Greg Capullo’s extraordinary Batman run. They’ve given us a series with plenty of cataclysmic events, so when the lights go out all over Gotham, Batman, Alfred and Commissioner Gordon are waiting for doom. 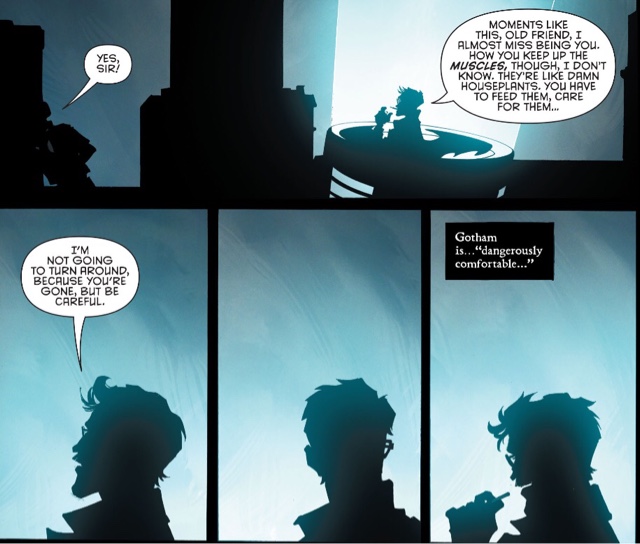 Does it arrive? With the Court of Owls plotting a comeback, the Penguin aiming to rule the underworld, the Man who May Be Joker still on that park bench and a cornucopia of criminals ready to flee Arkham, things could get very bad out there in the dark.
The narrator of Snyder’s story isn’t immediately known, not for the sake of a massive revelation later but because there’s a natural place in the story for it to come. And when it comes, it makes for a heartwarming moment the like of which we rarely get in a Batman story. It’s almost my favourite point in the issue, but there’s a bit of business involving a Court of Owls matron that beats it. But that’s not my favourite part of the issue either. This is: 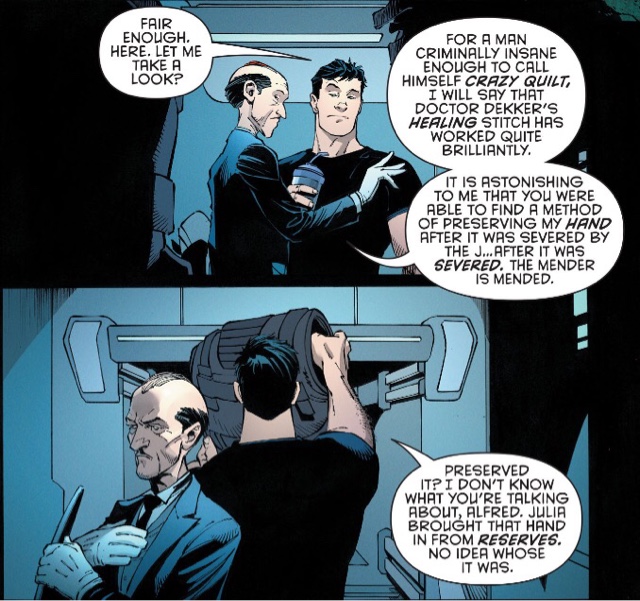 If DC were to announce that they were replacing Batman for a few months with Alfie and Brucie’s Batcave Banter, I’d be delighted. We’ve had decades, now, of dry, sarcastic Alfred and focused, humourless Bruce, but Snyder gives us a more rounded portrayal of the relationship. Bruce Wayne teasing his surrogate dad? I like it. And with their mastery of body language and facial expressions, penciller Capullo and inker Danny Miki bring Snyder’s words to vibrant life.
Over the past four years, Snyder has torn down and rebuilt the Batman, body, mind and soul, bringing him to the point at which his war on crime is more a positive vocation than a doomed obsession. His life has been defined by tragedy but now he’s helping the people of Gotham from a place of hope.
Alfred and Jim Gordon have also been on journeys – the former coming back from massive trauma at the hands of the Joker, the latter fighting on the front line of Batman’s world as substitute Gotham Guardian. Both are back in their old circumstances – which is most gentlemanly of Snyder as he hands the book onto Tom King – but their journeys have been important to the book. And while they’ve gained scars, literally in Alfred’s case, they seem stronger than ever. 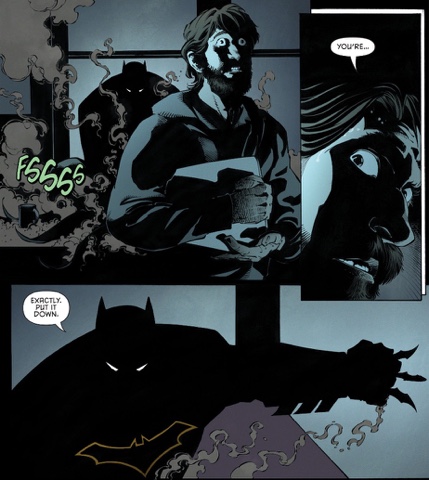 The darkened Gotham gives Capullo a chance to show once more how well he can tell a tale with little more than black shapes, how Batman’s tiny eyes set in shadow can say so much. And when the lights are on, we get the full Capullo/Miki orchestra, with the sublime colours of FCO Plascencia polishing the instruments. I’ve come to love their version of Gotham, which isn’t a dark cliche of a place but a teeming metropolis of multiple moods. Add in Steve Wands and his wonderfully calm lettering, and editors Rebecca Taylor and Mark Doyle, and you have a creative team which has earned its applause.
Gotham is…
The phrase is also a chance for DC readers to consider the success of a creative collaboration the length of which is rare in today’s comics. There have been moments in this long run when I’ve not been happy, decisions with which I’ve disagreed. But overall, Batman by Snyder, Capullo and co has been a wonderfully consistent treat, as their visions translated into memorable stories replete with startling action and surprising, yet true, character moments.
So goodbye, Scott Snyder and Greg Capullo. Gotham is… a better place for your time here.