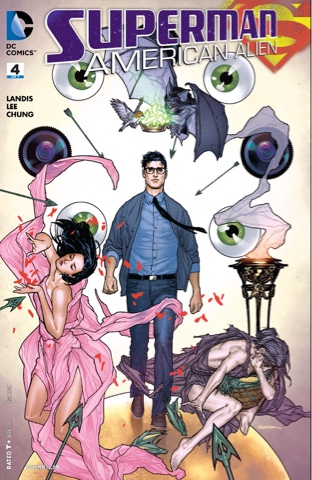 I’ve not been following this latest look at Superman’s early years – I’ve read that story too many times. Reading a précis for this issue, though, I saw that it was another take on the first meeting of Clark Kent and Lois Lane. Given that I’ve not seen a lot of Lois lately, why not give it a try?
Young Clark’s essay writing skills have won him a trip to Metropolis and the chance of a job with the Daily Planet. Along with another winner, Lois Lane, he’s been assigned to get a story from a summit between three of America’s richest industrialists – Olive Queen, Bruce Wayne and Lex Luthor. Clark doesn’t look to have great potential as a journalist, he’s got one basic fact wrong… 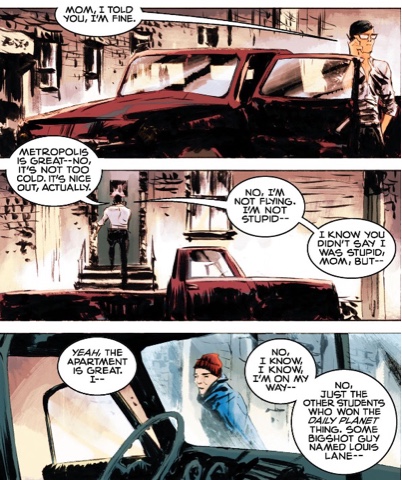 On arrival at the Lexcorp building, he meets ‘Louis’ Lane. 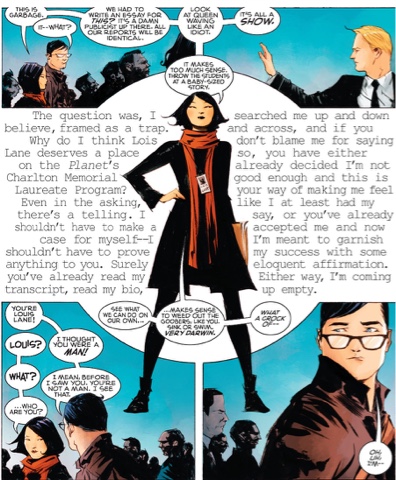 Then it’s a reunion with Ollie Queen, whom he met during an accidental cruise on Bruce Wayne’s yacht, and an encounter with Lex Luthor. Will he give Clark a quote? 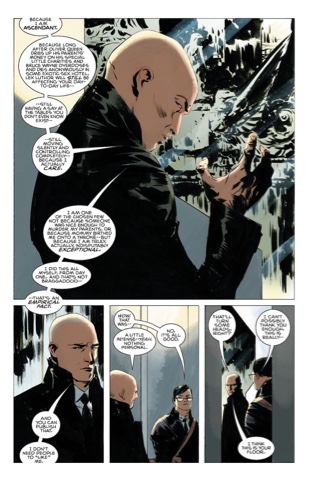 Or maybe he’ll just talk him to death? Happily, it turns out he was simply providing Clark with a suitably dramatic, newspaper-friendly quote – which isn’t to say he doesn’t believe it. Quote delivered, Alex dumps Clark in what he believes is the most appropriate place. 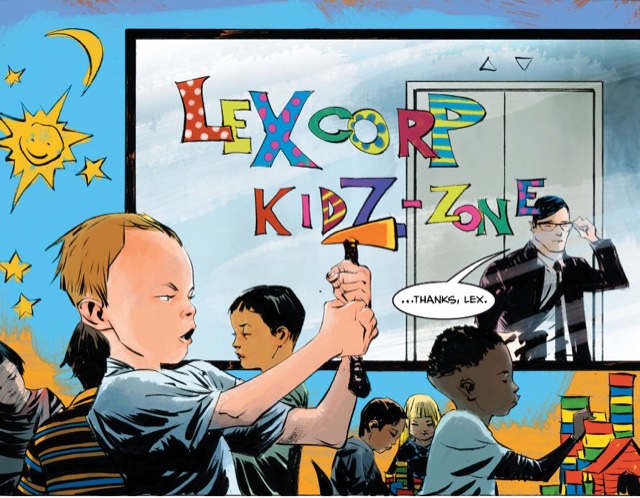 Fortuitously, someone else has been dumped there. Dick Grayson is waiting for Bruce Wayne to finish his meeting. 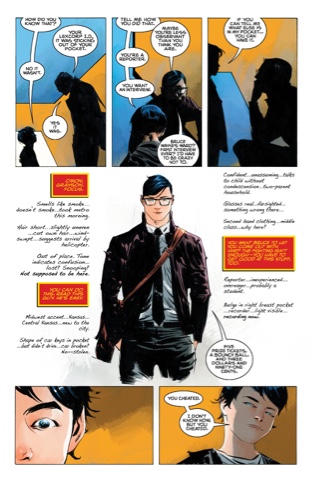 Clark and Dick try to get the measure of one another, Dick with his burgeoning detective skills, Clark with his X-Ray vision. In a decade or so, Dick will take on the Nightwing identity, in part due to his friendship with Superman; here, without knowing Dick’s connection to Batman, Clark also reinforces the boy’s notion that Batman needs a Robin.
The final scene of the issue sees Lois call Clark with an offer, and Clark encounter Batman for the first time – both men get a big surprise. 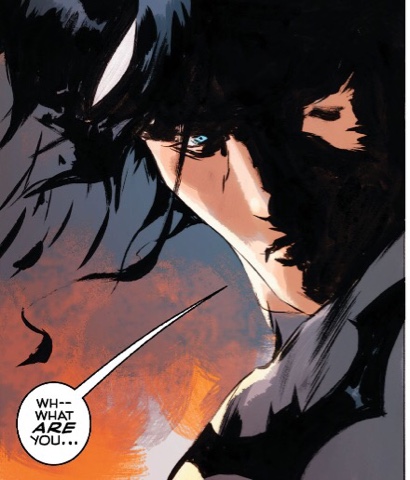 So, lots going on this issue. The Batman scene provides a nice injection of brief, but intense action, while the mostly tedious Lex talk ends on a high note. Ollie Queen is around purely to deliver a ‘what can a man be?’ inspirational speech, but the introduction to Dick is a joy – Landis elegantly sidesteps the questions raised by a single, unattached rich man having a young boy living with him, then gets right to the fun of two exceptional people connecting.
Oh, there is another moment which surprised me. I won’t show it, but I will say that if you liked Tobey Maguire in Spider-Man 3, this is your lucky day.
What does it mean to be exceptional? What are the different kinds of confidence? Landis tackles these questions a tad heavy handedly as we meet the various characters – a Luthor comment about people with an S on their chest seems terribly prescient given Superman hasn’t appeared in the costume yet. Still, it’s good to see a comic that’s about something, and there were enough sharp, entertaining moments to justify my purchase.
Where Landis falls down is in his lack of understanding of newspaper people. I don’t know if we’re meant to be impressed by the essay Lois wrote to the Planet but I do know, having been a journalist for decades, that it wouldn’t win her an internship. It’s insultingly amateurish, ignoring the brief in an offensively arrogant manner. And as for Clark recording his conversation with an unchaperoned child… he’d be kicked to the kerb by Perry White, right alongside Lois. And why the heck would Clark think Lois was ‘Louis’? If he’s heard her name over the phone, he’s heard it pronounced; if he’s heard about her by letter, he’s seen it written down. The gag simply doesn’t work.
Jae Lee’s art is as Art Deco elegant as ever, his storytelling sharp and to the point. The cityscapes are gorgeous, the body language true (that image of Lex playing the villain, complete with Nosferatu pose, is genius). It’s rather jarring, though, that he’s chosen to draw Lois and Clark as Asian-American. The look of the pages is finished by colourist June Chung and letterer John Workman, artists at the top of their game. Ryan Sook’s cover is head-scratchingly surreal, but I’d be lying if I said I didn’t like it. I can forgive Lois Lane as love goddess for the anointing of Clark by bat and bird.
A silent one-pager by Landis and artist Steve Dillon shows the origin of the Parasite. It’s fine – Dillon’s humanistic work is always welcome – but I’d have preferred another page of Clark and Dick, I love these guys together.
I’m glad I read this comic; it doesn’t give me the Lois I was looking for – I don’t see her as an idiot monster. It did, though, give me a different take on Luthor that I rather enjoyed, and that great Clark and Dick ‘team-up’. Take a look.