Hi all, Anj from Supergirl Comic Box Commentary here. Mart was nice enough to let me guest post here to discuss something decidedly not Supergirl … All-New Wolverine.
Well, maybe I shouldn’t be so fast. Because the truth is, the new Wolverine does remind me a little bit of a particular Supergirl. But more on that in a bit.

So why All-New Wolverine? I’m not a particularly big fan of the X-books, only purchasing when creators I trust are running things. So I have Morrison’s New X-Men. And I have Bendis’ All-New X-Men. And I enjoyed those books and the great artists who were associated with them (Frank Quitely, Phil Jimenez, Stuart Immonen and Mahmud Asrar, to name a few)

But I knew almost nothing about Laura Kinney, X-23, save for what I had read online and when she came into those other titles.

What brought me to this book were the artists. I have been a fan of David Lopez since Fallen Angel at DC. And Marcio Takara is taking over in a couple of months. So I went out and picked up the first few issues.

While the art is wonderful, what is going to keep me on the book is Tom Taylor and the story of redemption he is crafting here. And if there is one thing I love in comics, it is super-heroes with sketchy pasts trying to get past prior deeds and become something better. I especially like it when it is a legacy hero.

So settle in as I hit some key points from the first five issues.

Something has happened to the original Wolverine and Laura has decided to take up the mantle. He will live on in her. His legacy will be protected.
But she wants to be something else. He was well known for killing anyone he felt needed to be put down. He was a berserker. He, at times, seemed more animal than man.

We learn early on she doesn’t want to be like that. In a nice flashback, garbed in the gear they wore as members of X-Force (a particularly violent and pro-active team, if I hear correctly), we see Logan praise Laura for not killing a target. He talks about regretting some of the people he has dispatched. She should be proud to move past instinct, to think more, to spare someone. That isn’t weakness. She might be best there is at killing, but she doesn’t have to.

This thought of improving herself and working past her more murderous and unsavoury past is echoed nicely in the main plot.
Laura stops a murder from happening and the assassin turns out to be a clone of her. Shocked, she tracks down four more clones. They were created in a lab. They cannot feel pain. They are slowly dying. And they will have their revenge on their captors.

Their situation resonates so powerfully with Laura herself. This quest to redefine herself is a way to save herself, just as defending clones is also saving ‘herself’. She is trying to become more human, to feel. These clones have been literally robbed of feelings. They want to kill those who created them. Laura is trying to move past those urges.

It is a brilliant way to convey what Laura is going through.

One of the clones is particularly angry and violent. One is more innocent. One just wants to be left alone.
All of these are aspects of Laura, played out in front of us, struggling to find a way to survive.

Even if it sounds ‘on the nose’, Taylor simply keeps the story moving so smoothly that it doesn’t club the reader over the head. It is only when I have finished reading the issue that I think back to the moments and let it sink in. 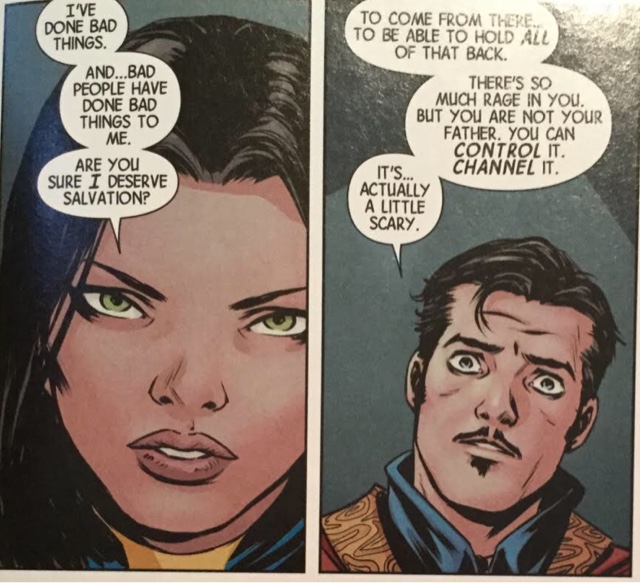 Despite trying to show these clones the light, that not everyone who has wronged them needs to be murdered, Laura still has to deal with her own past.

Laura asks if he scanned her the same way. Again, I feel like she is so unsure of herself. She is trying to redeem herself. Would Strange be aghast if he saw her life. Is she sub-human? Does she deserve salvation? And here Strange immediately validates her. She is acting the hero despite her past. No one is more deserving of the nom de guerre Wolverine.

That doesn’t mean this book is all philosophical debates about the soul. This is still a Wolverine book.

And when provoked, when defending the helpless, when protecting the innocent, Laura is fierce. She isn’t a pacifist. 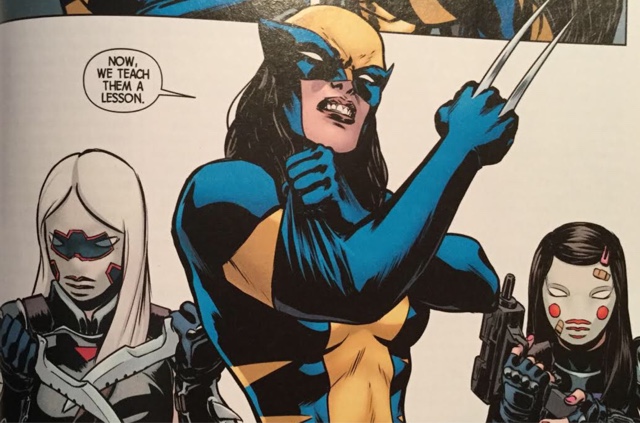 And she is ready to go to war when she needs to.

When it becomes clear that the lab chasing down her clones won’t go away, she decides to bring the war to them. 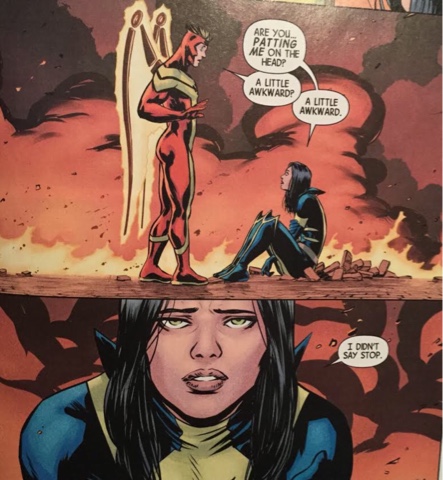 Taylor does a nice job reminding us that Wolverine is still a young girl with ‘normal life’ issues as well. She is trying to keep a romance with Angel going despite their superheroics. She has an empty fridge. 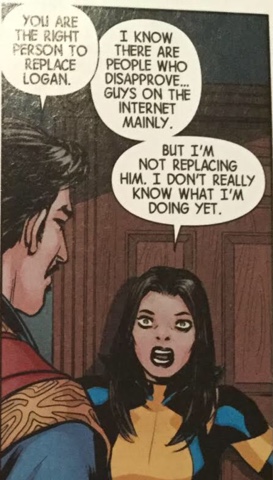 And she has to deal with people thinking she can’t be Wolverine (nice little jab metatextually here by Taylor).
Overall, this book has been just wonderful. The characterization here, Laura’s struggles, the clone plot mirroring her personal journey, the baggage of her past and even the name ‘Wolverine’, it all meshes nicely with action sequences and stunning art.
Yes, there is silliness (like shrinking with the Wasp to fight nanites in a clone’s blood) but I can look past that stuff to the heavier matter this book has built in.
Laura is a troubled youth with a sinful past, trying to redeem herself, on the hero’s journey, fierce in her pursuit of justice. Sound like someone? 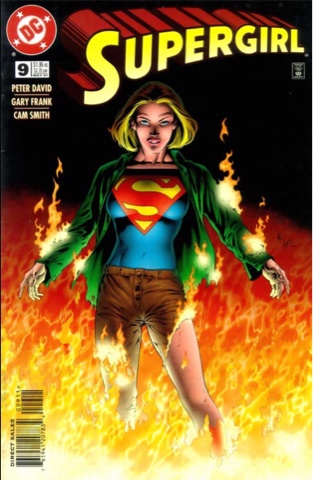 Specifically, this book reminds me of the Peter David Supergirl.

And frankly, that is the highest praise I can give the book.