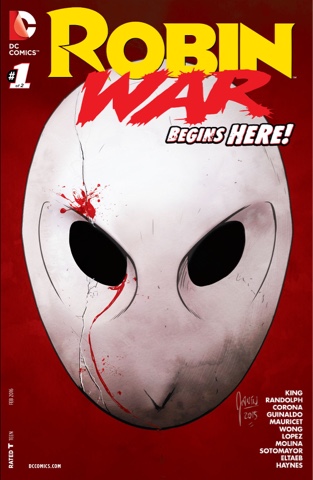 Once upon a time there was just one Robin. Then there was a second. And a third… But there was no overlap, one Robin succeeded another, again and again. But recently Gotham has seen the rise of a youth movement consisting of self-proclaimed Robins, would-be heroes with no connection to Batman. They train themselves, they support one another, and so far they’ve been doing OK dealing with the city’s pettier crimes.

Now, though, trouble comes home to roost.
Robin War #1 is a double-length issue kicking off a crossover running through the Bat-books featuring Robins past and present – current, retired, official, unofficial and once-put-on-a-mask-during-a-school-trip. The story opens with one of the We Are Robin gang trying to foil a shop raid. He’s cocky and brandishing a gun. Things don’t go well.
Lack of training, experience and sheer bad luck lead to the death of two men. This prompts Gotham’s ambitious Mayor Noctua (whose name is just two letters away from ‘Nocturna’, coincidence?) to push through the Robin Laws, empowering the police to arrest anyone out on the streets with ‘Robin paraphernalia’ – masks, weapons, the wrong-coloured shoes… 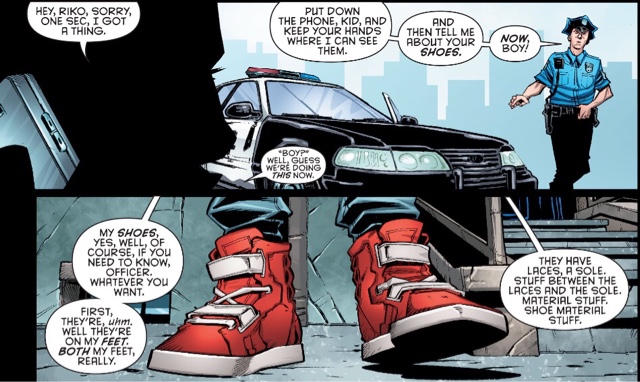 …and the guy wearing said unwanted trainers is street Robin leader Duke Thomas, who shows how capable he is when he’s picked up by a zealous officer of the law. Duke calls a meeting of Robins in the hope the kid who caused the deaths will come forward, explain what happened, take his licks and stop the entire movement being tarred with an R-emblazoned brush.
Taking a big interest in Gotham’s war on the teen heroes are the real Robins – Red Robin, Red Hood, Dick Grayson and current official holder of the title, Damian Wayne. And in the shadows, the Court of Owls, that creepy grouping of Gotham’s elite which secretly controls the city. They’re relishing the attack on Robins – they may even have somehow manipulated the shop incident to spark the war – and taking a big interest in the participation of one former teen wonder in particular.
When this comic was announced, I had no plans to buy it; then I noticed Tom King was writing. Tom King, whose work on Grayson, Omega Men and The Vision marks him out as one of the freshest voices in comics today. And he doesn’t disappoint here. He sets up the main conflict with economy and style, introducing characters and situations, developing the details and ending the issue on a most intriguing note. I read the free Sneak Preview of We Are Robin and felt no desire to go further, but King gets me invested in the lives of Duke, Riko and co. He paints the relationships between the ‘real’ Robins – those who have partnered Batman – with broad, yet smart strokes, showing that while they needle one another, there’s respect there.
King even manages to make that narrative cliche of TV screen snapshots work in a  marvellously entertaining and informative pair of pages. And that takes real skill.
A battalion of artists helps King get his story across – Khary Randolph, Alain Mauricet, Jorge Corona, Andres Guinaldo and Walden Wong – all working over the breakdowns of Rob Haynes. It should be a mess, but it works. That’s due in large part to Haynes ensuring there’s a single visual storytelling sensibility, but the individual artists – I guess everyone is doing full illustrations bar the pencilling and inking team of Guinaldo and Wong – acquit themselves well. There’s lots of dynamic, characterful cartooning, such as this by Randolph: 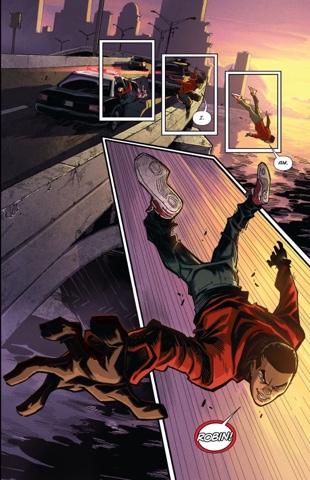 And this from Guinaldo and Wong: 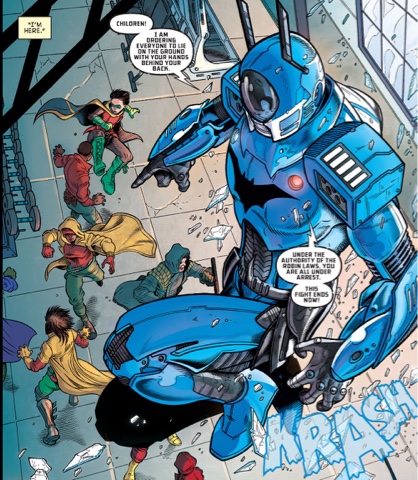 Guinaldo and Wong also provide a nicely timed page showing Damian’s reaction to meeting the Jim Gordon Batman for the first time, while Randolph recreates a very familiar image from Batman history in the splash that acts as the climax to the first scene.
But all the guys do good work, as do colourists Emilio Lopez, Chris Sotomayor, Gabe Eltaeb and Sandra Molina. All this, and a stonkingly good cover from Mikel Janín.
If the rest of the crossover matches the quality of the kick-off, we’re in for a treat.