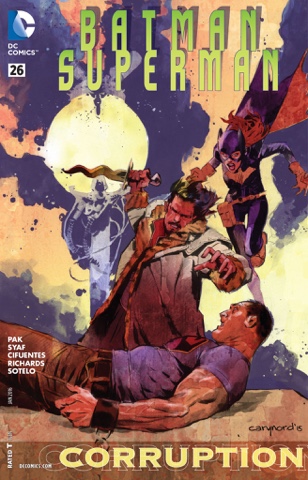 Superman knows Vandal Savage has something to do with the conspiracy that’s seen him depowered. He’s been beaten up by the immortal villain and reluctantly accepted a helping hand from Batgirl. As this issue begins, she’s brought in more assistance – from fellow Gothamites Dick Grayson and Red Hood. The mission? To save a small community of Savage slaves in Siberia from being murdered, or hunted down forever.

The people have a week before Savage returns, a week in which they’re meant to ready nuclear missiles for who knows what devilish purpose. They need specialists. 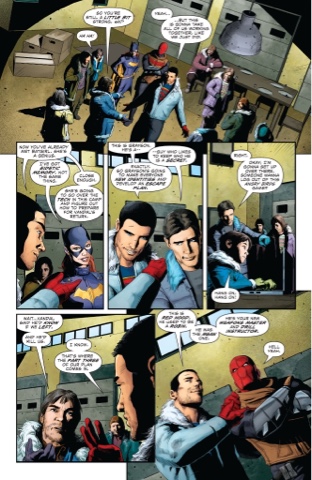 Superman doesn’t have ‘photographic memory’ or weapon skills or spy savvy; what he does have – and it’s something he’s been sorely lacking in the Truth stories – is the ability to inspire. He’s someone to rally around. When shadow creatures attack, it’s obvious Batgirl trusts him when he says the beings aren’t sentient and so can be destroyed without qualms. A kid for whom Dick is creating a new post-Savage identity wants to be named Clark. 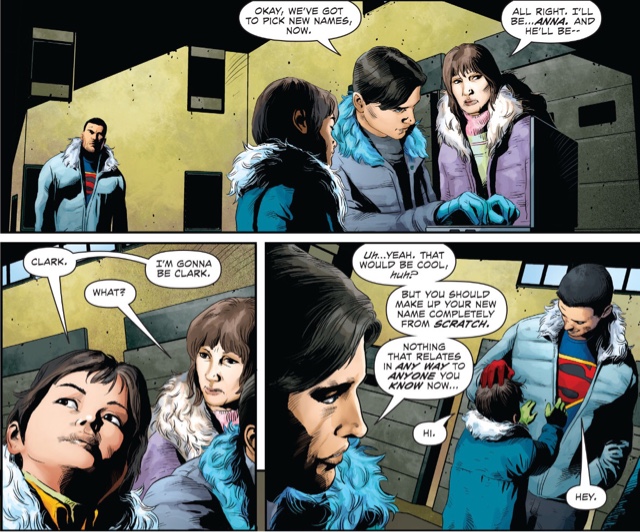 Superman does a lot of thinking this issue; in one sequence, he basically sits looking into the distance as the Batman Family swap views around him. Having a team nearby, people trusted by his best friend, seems to have calmed Clark. He has people around to share the burden, good people who won’t be pushed away. They’re there for him, and that seems to mean something. And that has him embracing the teamwork ideal once more.
As he gives us something of Superman back, writer Greg Pak also does a fine job with Dick, Jason and Barbara, pinning down their personalities, how they work together, and plugging them into the ongoing Savage storyline. The former caveman doesn’t appear this issue, yet he’s a dominating presence, always on everyone’s mind. In one sharp scene, Dick outlines why he’s so scary. 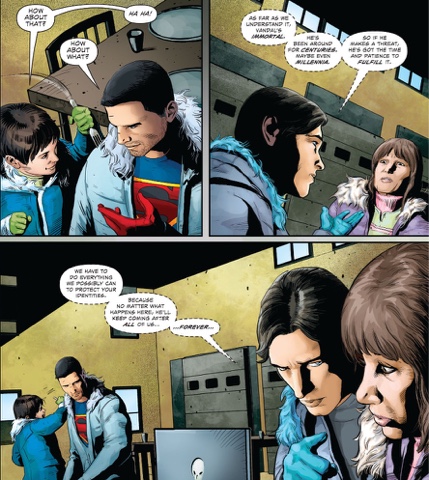 Even the Siberian families, who could be anonymous bit players, get a bit of personality. 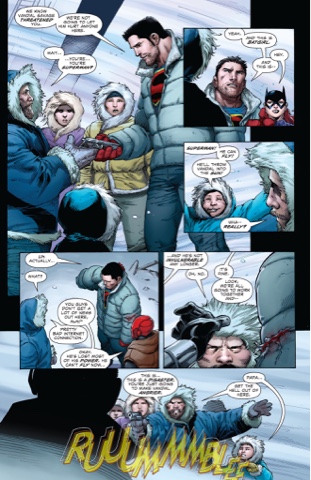 The ongoing Savage storyline moves forward as Superman begins to put their foe’s’ plan together, and this book remembers its title as the Jim Gordon Batman returns, having not been seen since the start of last month’s issue. He shows up just in time for a battle with shadow monsters, beautifully drawn by Cliff Richards. 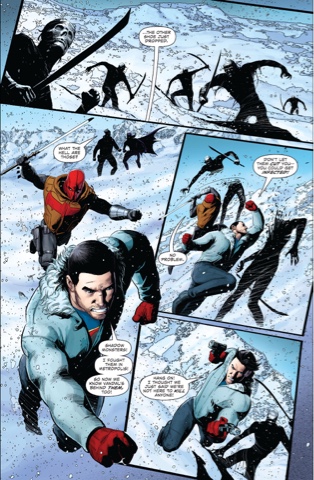 Or maybe Ardian Syaf – they’re both in this issue, but I think it’s Richards. Whoever it is, nice job, as the creatures look creepier than ever, and the action sequence pops. The panel-busting compositions bring a dynamic flow topic proceedings as the book heads to a most intriguing cliffhanger.
The art is good throughout; there’s a real sense of place, the Siberians actually look the part, the cold-clad heroes have distinctive body language – and a nod to colourist Beth Sotelo for helping keep the visual consistency with her wintry tones. Vicente Cifuentes inks Syaf and, as ever, they make a more than decent team. There’s nice lettering from Rob Leigh, with the final blurb font dead on for what we’re seeing. His title lettering for the aptly named ‘Teamwork’ is similarly good-looking and smart.
And Cary Nord’s cover is pulpishly great. I wonder if that purple person will figure into later issues – they seem too specific to be random. Ryan Sook and Spike Brandt’s digital-bonus variant cover homage to The Dark Knight is fun, I love them Looney Tunes. 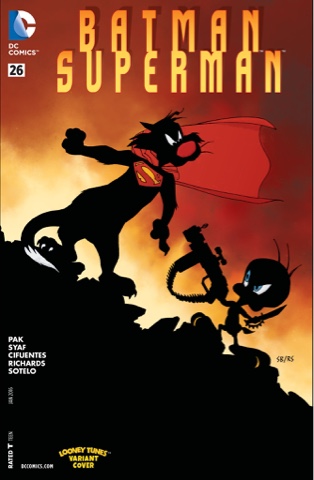 All in all, this is a good looking book that entertains. Since we’re stuck with the powerless Superman awhile, it’s nice that more of the authentic guy is busting through. And while the dominance of Truth and absence of Bruce Wayne has me considering this more of a Superman than a team-up book right now, Pak and co give the Bat-Crew an excellent showing.