Bat-Mite goes to Washington in this final issue, and he’s keen to help President Obama with, well, anything – he’s already remade Mount Rushmore and remodelled the Washington Monument with his magical powers. Before he can further ‘improve’ national monuments, though, he uncovers the whereabouts of arch-enemy Gridlock, who’s still obsessing over some Star Trek-alike TV show. That proves to be Gridlock’s downfall – or perhaps, the opposite – leaving the rest of the story open for Bat-Mite to return home to the world whose leaders banished him in the first issue.

While I’ve found Bat-Mite more grating than cute in this series, I’ve kept buying ibecause writer Dan Jurgens’ love of the DC Universe enriches every page. Who knew that in 2015 we’d get an Inferior Five story? (I’ll ignore the fact that DC Comics renamed Athena Tremor Tough Bunny, that’s just Dumb.) The script is wilfully daft in what I’d say is the best issue, with the affectionate Star Trek gags the highlight. 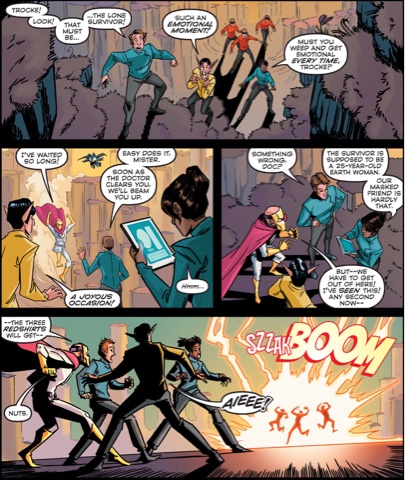 Artist Corin Howell, with an inking assist from Andres Ponce, makes every page a pleasure. There’s a lovely animated feel, the storytelling is airy and expressive, complementing Jurgens’ words. Colourist Mike Atiyeh goes for boldness rather than subtlety, as befits a Bat-Mite story, while letterer Tom Napolitano continues to give the Mite of Night’s most dramatic lines a suitably Batman TV series treatment. I don’t know cover artist Lesley-Anne Green, but I like the image – Suitable For Framing and all that. 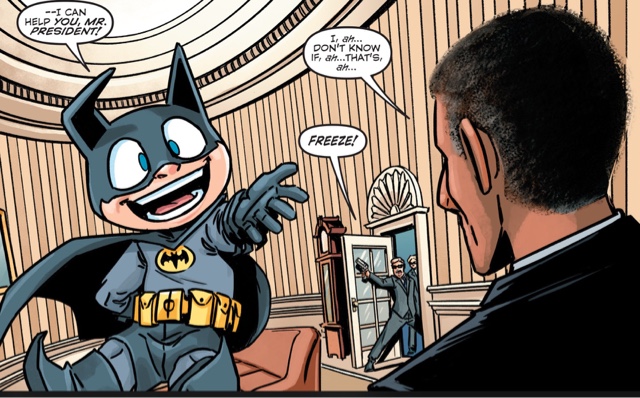 I have just one question… is the President’s hair a photograph? It looks so real.
The final pages hint at a sequel; I’m not sure sales would merit such, but if there’s a trade of this out in the next couple of months, you Mite put it on your Christmas list. (Sorry.)