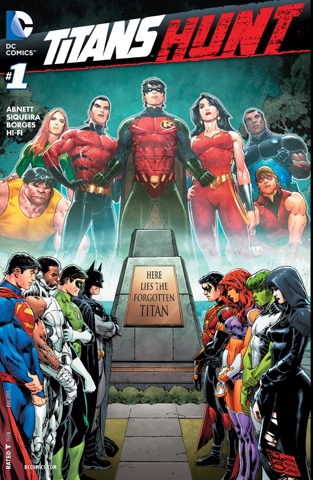 Hard-luck hero Roy Harper is having feelings of deja vu. He can’t put his finger on it, but that T-shaped water tower reminds him of… something.
When an Atlantean turns Dick Grayson’s latest mission for Spyral into a bloodbath, the unnatural whirlpool into which the stranger flees reminds the former Teen Wonder of… something.
Newborn Amazon Donna Troy has been drawn to an abandoned clubhouse which reminds her of… something.
Actor Mal Duncan is about to collect an award when the vision of a twisting stairway to Heaven reminds him of… something.
Addictions counsellor Lilith Clay sees two young girls playing in her waiting room and it reminds her of…something. 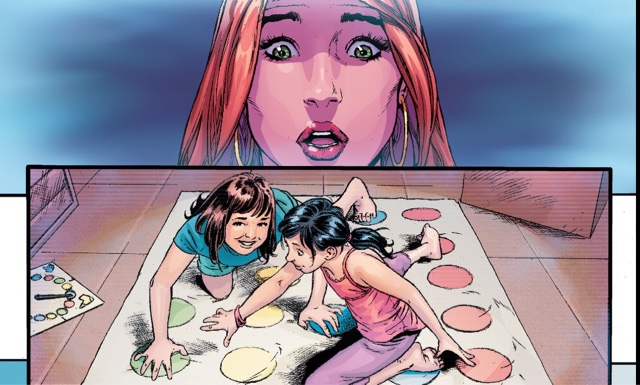 Aha, I got this one. They’re playing Twister. Mr Twister was the villain of the first Teen Titans story. And Dick is seeing a kind of inverse waterspout. And Mal’s staircase is twisting.
OK, Mal and Lilith weren’t in that first adventure, but I’m probably thinking in the right direction. It’s a safe bet Roy is thinking of top-heavy Titans Tower, the ugliest HQ in comics. Is Donna flashing back to the original Titans clubhouse, which I can’t picture right now, where the Silver Age Wonder Girl lived for a time? I don’t know.
I do know that this is a niche book. It’s for fans of the Silver and Bronze Age Teen Titans, the team which preceded the more successful New Teen Titans. The team that went from zany Haney teen tales to spooky sagas and ho-hum heroics.
It’s pure continuity porn, the central mystery being the connection of post-Flashpoint versions of the original Titans to their other-dimensional predecessors. Given that since 2011 DC has been actively ignoring its legacy, it’s weird that they’re opening the door to the past with this series, and last week’s wonderful Lois and Clark.
But open it they have, and I rather enjoyed the debut issue of Titans Hunt. Dan Abnett rises to the challenge of producing a story that makes sense, introducing his characters and plot points with short, sharp, highly entertaining scenes. My favourite moment sees Roy meet a familiar face. 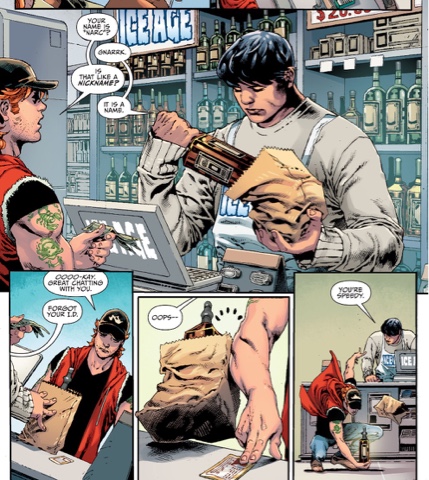 Funny. Abnett really knows how to use a page turn. When was the last time we saw the Teen Titans’ prehistoric pal? It’s clever that he works in a place called Ice Age. And was he ever called ‘Caveboy’, as Lilith’s files suggest?
There’s more wit in a scene in which Roy wakes up after a night of drinking – it’s black, but speaks to character and serves the story.
Abnett’s sharp script is matched by the clean, pacey art of Paulo Siqueira and Geraldo Borges. The characters we’ve met previously in current continuity are spot on, while the debuting Mal and Lilith (I think Karen has shown up as Bumblebee in Justice League) look like their classic selves. The Dick splash has real impact, Gnaark is the sweetest cave person ever and Aqualad … 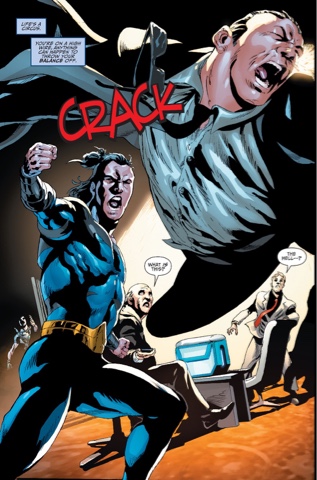 …oh, unfortunate. Is that how Garth looks in Aquaman these days? To the barber!
Hi-Fi colours, Carlos M Mangual letters and everything looks great. The last page, in particular, is a winner.
I’m not sure about naming this series after one of the least-loved New Teen Titans stories ever, but I do love the logo, a take-off on the early Seventies masthead, and the issue’s title, ‘The Brave and the Bold’, a nod to the series in which Robin, Aqualad and Kid Flash first teamed up. 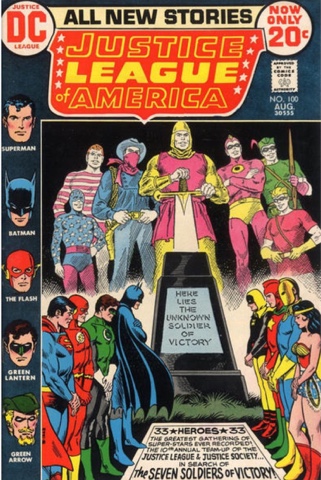 An Easter egg for my aged eyes is Siquera and Hi-Fi’s moody cover, which homages Justice League of America #100, the first issue I ever bought.
So, I can’t see this book having wide appeal, but happily, it’s a limited series, so hopefully whatever (probably modest) sales it gets will likely be enough to let the story be told. Maybe we’ll even get to see the real Joker’s Daughter!