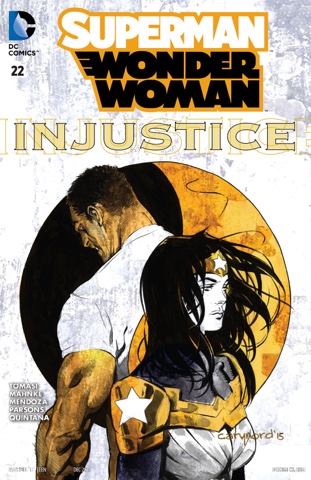 In this great issue! 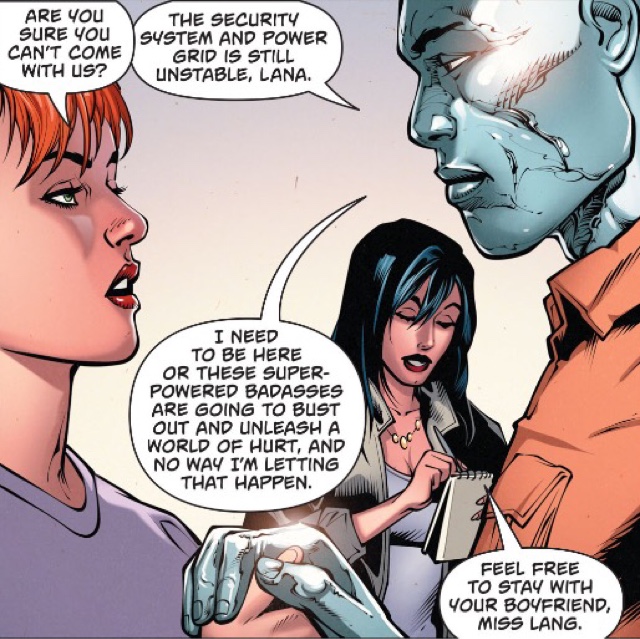 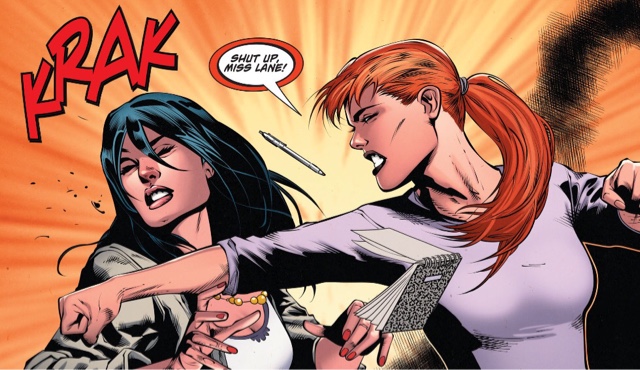 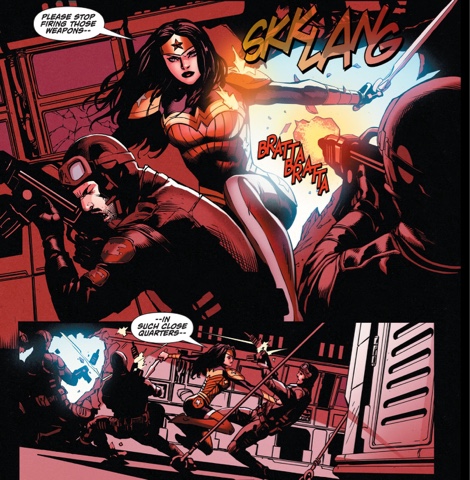 Wonder Woman follows up by slapping them with their sword.
The pair kidnap the Parasite from the chopper. 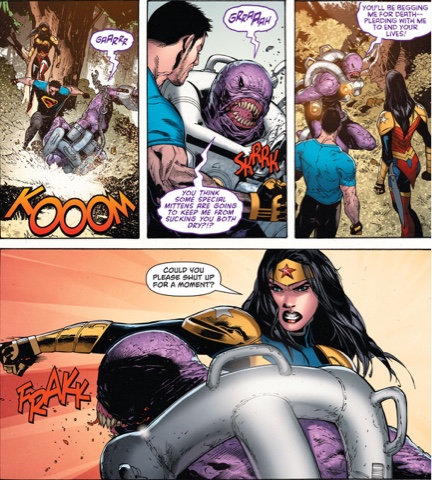 Wonder Woman smashes the chained villain in the kisser. 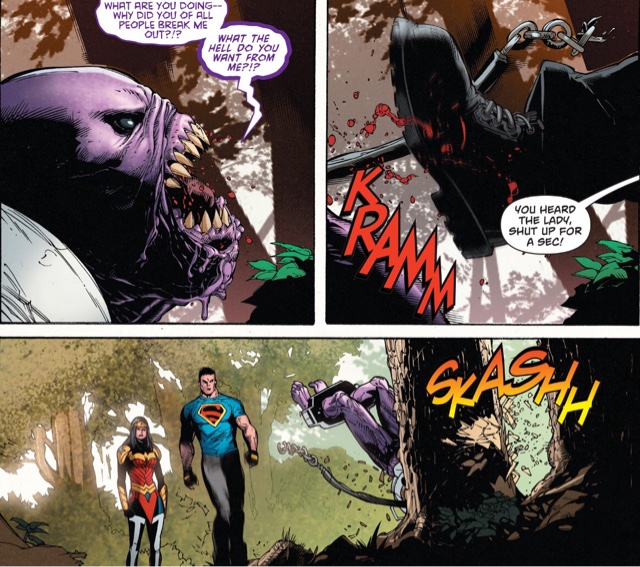 Superman kicks him in the teeth, tossing him into a tree. 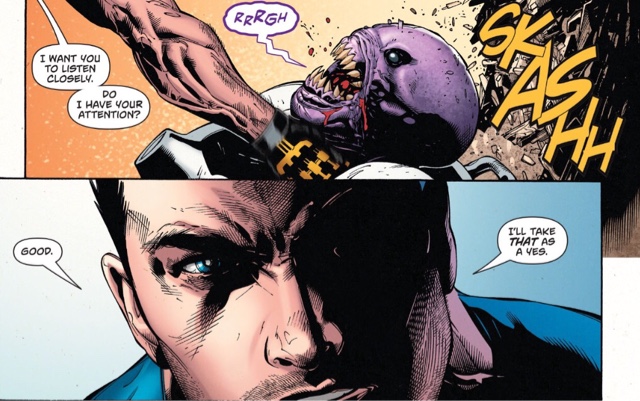 Superman then punches him again.
Almost every page of this continuation of the de-powered Superman storyline contains bullying, threats and unjustified attacks. Superman has a problem – he’s been outed as Clark Kent and needs to neutralise the danger to his friends. But as with previous chapters through the Superman line, he literally attacks the situation, refusing help because he doesn’t trust anyone.
And that’s how things start this time, before he finally does let Wonder Woman and Flash aid him, building anti-Parasite gloves on the JLA satellite – but only after much cheap conflict. Why Flash is aiding him rather than calling a meeting of the full Justice League to court martial Superman, I have no idea. 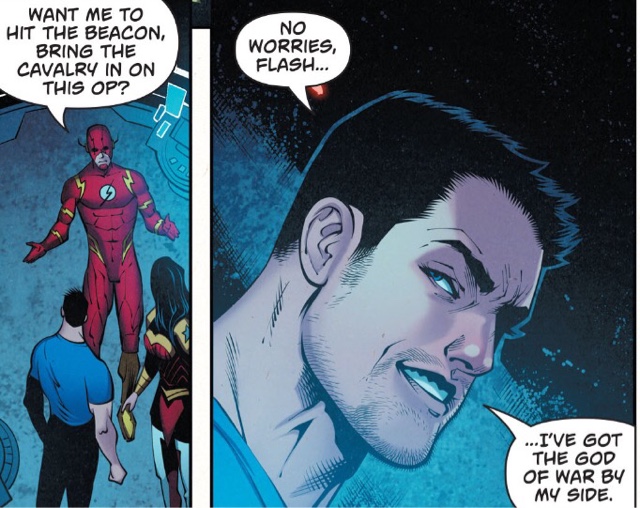 And while it’s nice that finally he admits Diana is useful, he brings her down to his level with the attack on the transport. There she is, telling the ordinary humans not to fire, when she’s the one wrecking their helicopter and sticking a god-forged sword in their faces.
I hate this issue with a passion. The irony is that it could have left me smiling; it has Superman trying to break up with Wonder Woman. But it turns out he’s probably just trying to push her away, like he’s sidelined everyone else in his life. And besides, everything else surrounding the moment means only people who don’t care for Superman, or Wonder Woman, Lana or Lois could like this ill-conceived story.
Peter Tomasi writes (still with the silly ‘story and words’ credit), and he’s losing the goodwill his earlier work earned him, though Superman Editorial is likely delighted he’s hitting the current angry tone demanded by the line. I’m not impressed by panels such as this.

Lois won’t explain, Lana doesn’t want to know, Diana doesn’t give a toss either way = unconvincing attitudes there to perpetuate fake conflict.
It’s all so predictable. Superman pummels ahead, looking like he’s moving forward, but actually stuck in a months-long holding pattern. Supposed co-star Diana is sidelined, there just to support her man. The only surprise is that she doesn’t deck Clark when he says he doesn’t love her anymore. Isn’t that the default mode of communication in any story featuring Superman these days?
Doug Mahnke pencils, and there’s no denying the man knows how to tell a story, drawing the action and emotion of the script with real talent and craft. He seems to relish conveying the oversaturated emotions and stomach-churning violence. Despite the fact we’re meant to be rooting for Superman, his work seems in no doubt that Clark Kent is not a good guy right now. 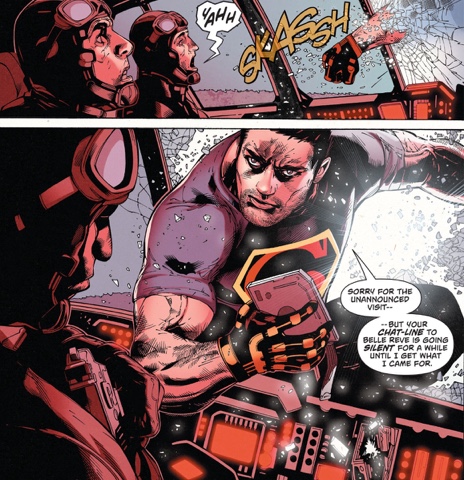 He acts like a villain, and Mahnke – aided by inkers Jaime Mendoza, Sean Parsons and Johnny Desjardins – renders him as one. 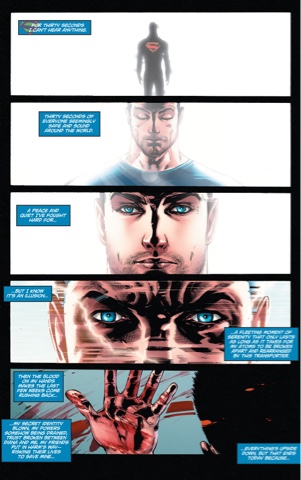 Mahnke and Tomasi’s best moment is the opening page, which sees a calm Superman enjoying the peace of the JL transporter beam… of course, he then attacks the Flash, supposedly a friend, and renders him unconscious.
We’ve already seen moments from this issue in the Sneek Peek several months ago, but context doesn’t make such things as the Flash assault any more palatable. Superman has accused Lois and Diana of betraying him, but he’s the one cold-cocking the Flash.
It’s interesting to compare two pages, in particular, Sneak Peek… 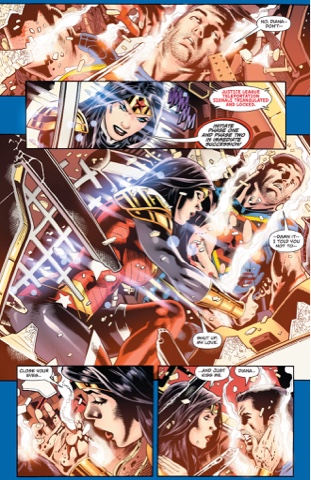 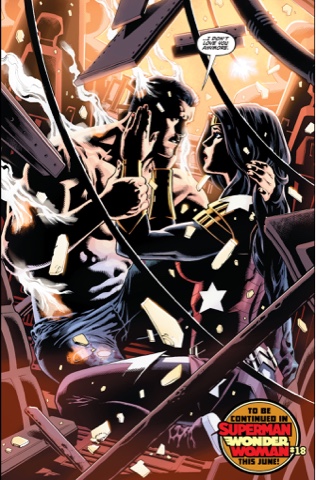 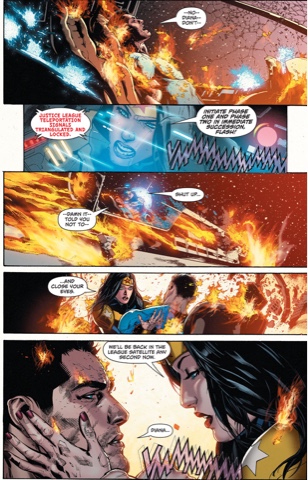 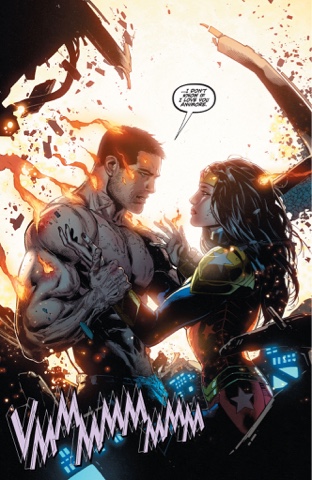 A one-word change in the splash panel gives Superman wiggle room so far as the ‘does he still love Diana?’ business goes. And Diana is less soppy in the actual issue, thank goodness. 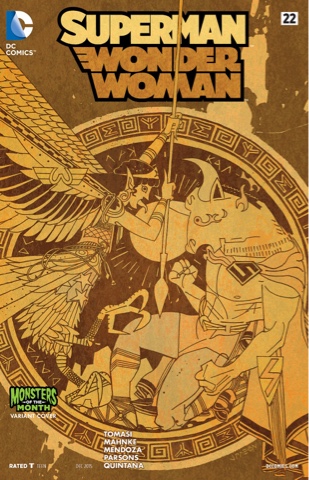 Positives. Cary Nord’s yin/yang cover is gorgeous, I especially like the unusual colouring, and John Paul Leon’s Monster of the Month variant is a feast for the eyes.
Don’t be like me. Don’t buy this book. Send a message to DC that you’re not supporting this storyline – be stronger than me. I’m somewhere between pathetic rubbernecker fascinated by the car crash that is current Superman, and the old friend, desperately hoping their self-destructive pal will turn the corner this time. Given solicitations for January are out, and Superman is advertised as getting darker yet, that’s not going to happen. So let’s just pack it in now.