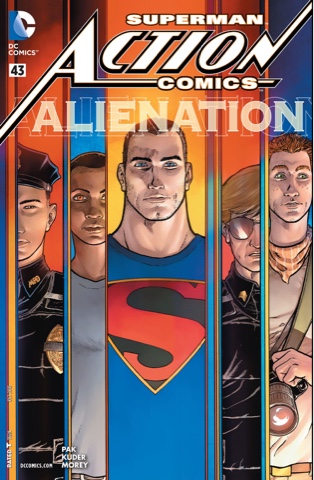 The continuation of the Hard Truth storyline opens with Superman attacking police officer Binghamptom. He’s been provoked by the authorities’ assaults on his neighbours, but it doesn’t look good as Jimmy Olsen captures everything on camera and automatically uploads it online. And then, Binghamptom stands revealed as one of the shadow monsters who have been bedevilling the newly outed and underpowered Superman.

The mayor urges Superman to leave the city, because he’s become a target, but he indicates that he’s staying, a decision vindicated after he discovers his apartment has been wrecked by alien-haters. He organises his neighbours into their own defence force, ready for what comes next.

Downtown, the mayor asks officers who were on the scene, including Binghampton’s loyal pal Angela Petruzzelli, to see her and give their side of the situation. And that’s when all hell breaks loose again…

One of the things about reviewing is that you have to try and look at something for what it is, not what you want it to be. I’ve posted previously about how I’d rather be reading a traditional Superman story than DC’s current spin on the character. So let’s forget that and just look at what writer Greg Pak and artist Aaron Kuder – they’re co-plotting – build with the Lego they’ve been handed.

A fast-paced character piece filled with mystery, that’s what. It’s good that Superman realises he really isn’t acting in a very Superman-like manner, brutally pounding his enemies with as much force as he can muster. I like that the storytellers introduce a character, have me feel one thing about her, then force me to do a 180-degree turn in the space of one page. Superman gathering his neighbours to ask them to look out for one another – he can’t really leave the city because that’s where the corruption is centred – makes for a heartwarming scene. Jimmy’s support for his pal Clark speaks well of him.

And here’s an interesting moment. 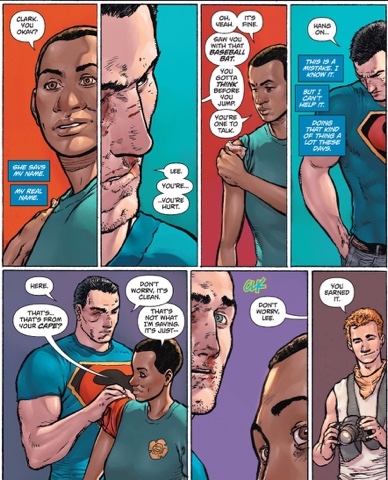 Handing his cape rag to Lee to use either because it’s a handy tourniquet or has healing powers is a mistake? The implication is that he’s feeling an inappropriate warmth towards her, attracted by her bravery and spirit. Lee may have a partner, he definitely does. OK, the fact that Clark never gives supposed girlfriend Wonder Woman a moment’s thought outside their shared comic shows the romance is just a longtime stunt, but still, Superman should be able to focus a bit better at a time like this. If he’s not feeling committed to Diana, he needs to do them both a favour and end it – don’t start messing others about, this isn’t the Sixties when it was OK to play Lois off against Lana.

And while I realise the Lois part of the overall Truth sequence is a focus of the sister Superman title, it’d be nice were she to cross Superman’s mind for even a second. Whether he currently likes or loathes her, she’s meant to be important to him.

Jimmy, as I said, is being a rock, but he really needs to alter his tech settings; journalism isn’t about posting every bit of visual or verbal information you pick up as it happens, it’s a matter of finding the story and presenting it in its best form. He’s meant to be a professional, not a ‘citizen journalist’ amateur.

Though that meeting with the neighbours was great, with Pak capturing the voice of Superman, the ‘you’re all Superman now’ is a bit Charlie Hebdo on-the-nose.

And the opening revelation of Binghampton as a monster is far too easy an out for a Superman who has lost control. 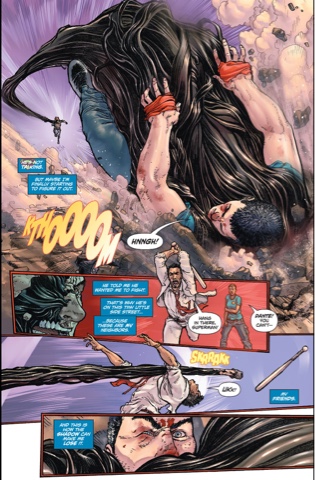 The art throughout is just eye-popping; Aaron Kuder to one of DC’s biggest assets right now, able to tell a story with power, economy and humour. Action scenes such as Superman’s punching across the street by Binghmapton, followed by Dante’s re-entering the fray, have real, no pun intended, impact. 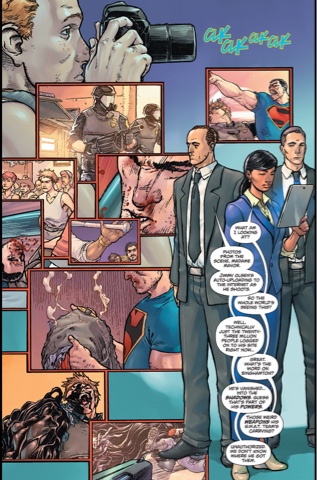 And quieter moments such as the Mayor’s chat with her aide, composed to fit the back and forth balloon into a single, not overcrowded panel, alongside insets of the fight aftermath, work equally well. The two-page meeting scene, while twice as big as it should be in a 22-page comic costing $3.99, shows Kuder’s willingness to take the time to give us recognisable human beings rather than repeated stock types. Cute baby!

Then there are the shadows closing in on someone we learn is an agent of darkness – another great composition by Kuder, smartly coloured by Tomeu Morey and lettered by Steve Wands.

The hands-down best scene is this one, as Clark looks at a smashed picture of him with his parents, and realises that while his image has been shattered (again, a bit on the nose), they’re OK. That’s my Superman.

Action Comics, while embroiled in a direction I’m not behind, continues to be the best Superman book DC is publishing. I wish the company would make it an out-of-continuity series featuring a traditional Superman – powers, trunks, supporting cast – because Pak and Kuder would likely produce timeless classics, but for what it is, it’s excellent.

Oh, and here’s a look at the DC Bombshells variant cover, a great image by Ant Lucia. 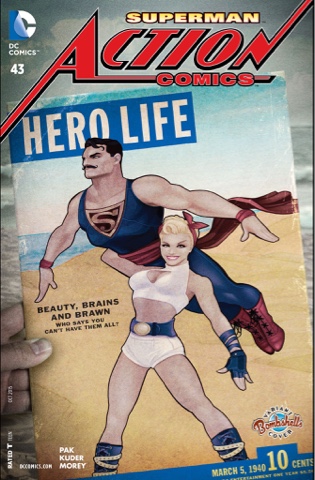