Polar Boy. Night Girl. Chlorophyll Kid. Stone Boy. Fire Lad. They debuted in ‘The Legion of Substitute Heroes’ in 1963’s Adventure Comics’ #306. If you’ve not read it, the tale sees an assortment of new heroes who fail to gain entry to the Legion – mostly because the members were a bunch of illogical snots back then – decide to form their own team, to secretly back up their idols. They wind up stopping the invasion of Earth by a bunch of evil plant-people, but never let on that they saved the day. This origin has been reprinted many times – in Archives, Showcases and Giants – and it’s also on Comixology, and cheaply too. If you’ve any kind of love for the Legion, the Silver Age or just heartwarming comics, you’ll likely enjoy it.

To say I have affection for this story is something of an understatement. It’s one of the first tales of the Legion I ever came across, and one of the most charming. It’s impossible not to root for these hard-luck wannabe heroes, especially when contrasted with the up-themselves Legionnaires. I love that the great message that even if you don’t make the first team, you can still be a hero, isn’t rammed down our throats. 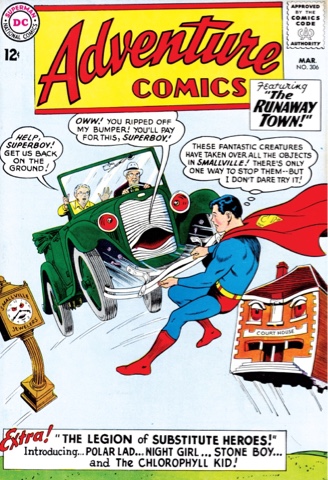 Interesting that one hero’s name is wrong, another gets a definitive article that makes him sound like a cowboy, while a third isn’t mentioned. And look at that cover, a wonderfully inviting image for one of my favourite Superboy/Mxyzptlk battles of wits ever. It’s a goofy classic, with Lana Lang having a terrible time in Fifth Dimensional high school. 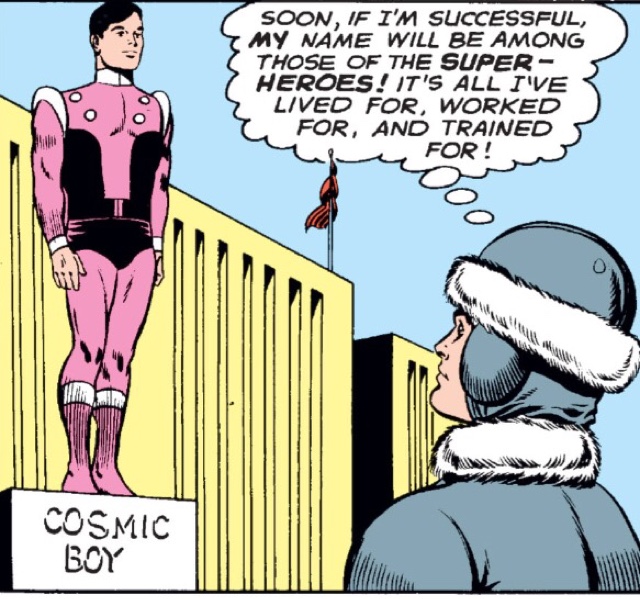 The Legion story begins with Polar Boy – Brek Bannin – having travelled to Earth to attend the annual Legion tryouts. Question is, if Brek’s trained so much, how come it all goes so badly wrong at the audition? Does the tyrannical Saturn Girl mess with his mind because she’s jealous of his winning ways? 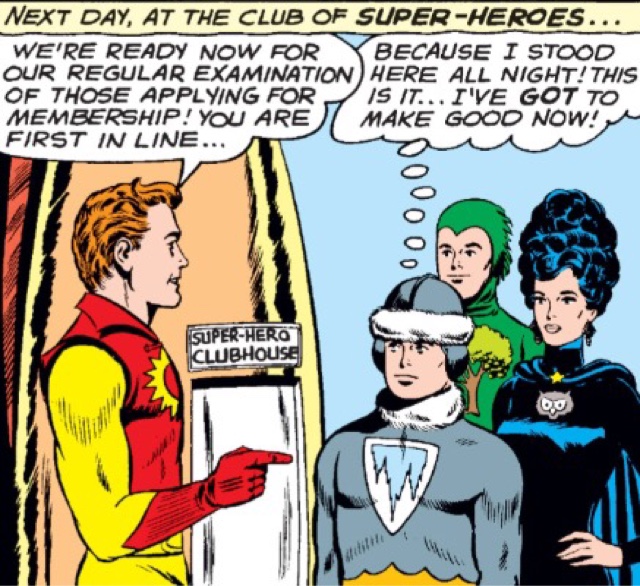 Hmm, with his power to slow down his body to deal with his world’s six-month nights, you’d think Stone Boy would’ve been waiting for weeks! Anyway, here’s our first look at Night Girl, and immediately Lydda makes a big impression, with a super-sophisticated up-to-the-Sixties minute hairdo. To her, a 30th-century girl, of course, it was retro … Maybe she fixed it that way to impress her crush, history buff Cosmic Boy? 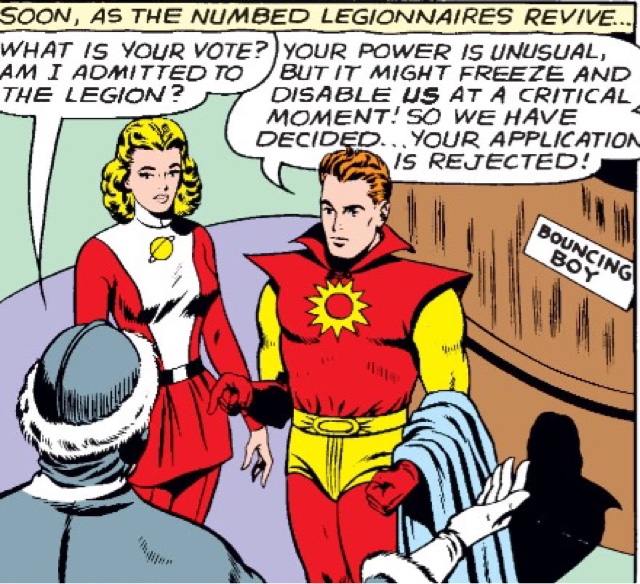 Could there be a more inappropriate member to tell Brek his power is too dangerous for the Legion? Sun Boy, a teen with the exact same ability, but in reverse. Surely writer Edmond Hamilton was having a laugh.

And how’s this for a seminal scene? No one does disconsolate like artist John Forte, and no scene exemplified that ability more than this one. The unusual, for him, use of shadowing on the Cosmic Boy statue is wonderful for conveying mood. 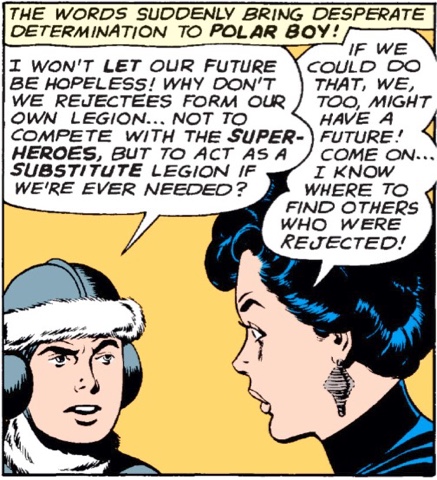 Ah yes, the Greatest Earrings in Comics History. And a mystery – where are the other rejects hanging out? We never find out … but thinking on, is it a stretch to suggest that Lydda and the other lads had already had the Subs idea, so she sought out Brek, then was good enough to let him think he’d come up with the notion, to cheer him up? 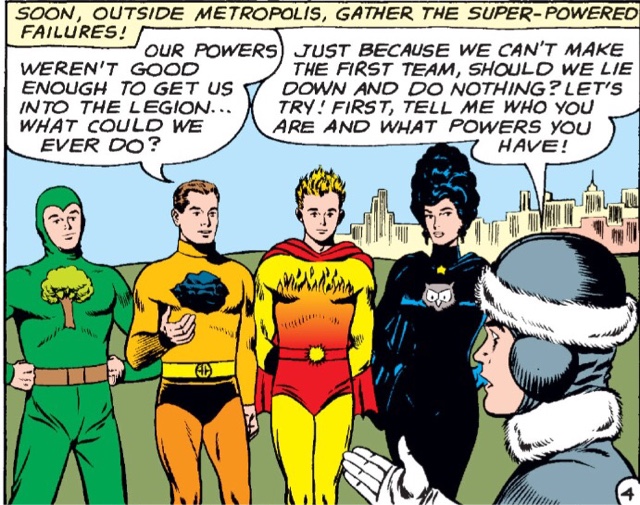 Just adorable. Forte has put Chlorophyll Kid, who fell into a pot of Baby Bio, into a babygro. And I just love the more illustrative chest symbols of the boys, and the colouring, and that cute owl! Just seeing these guys, with their hearts on their sleeves and their abilities on their chests, makes me grin. 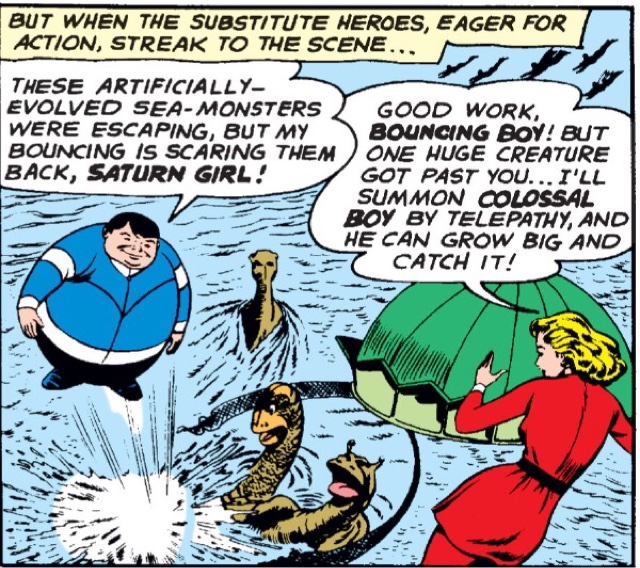 Bouncing Boy can bounce off the surface of water – I guess he really does become as light as a beach ball. I suppose that’s nicer for the people he lands on. 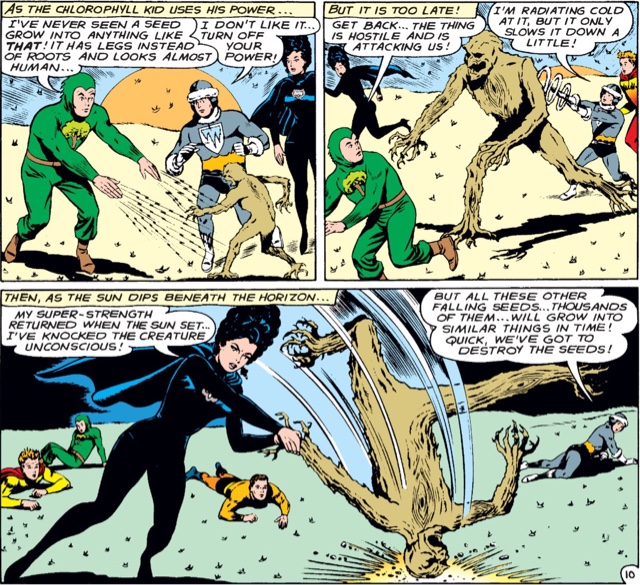 Forte’s art has a reputation for lack of animation, stiffness, but this sequence puts the lie to that – he doesn’t fall back on stock poses, like many a more popular artist. No, he gives his characters appropriate body language, you can gauge the emotion of Chlorophyll Kid without having to look at his face – brave, but sheepish. And the creepiness of the just-born plant man in panel two is immediately defused by the humour of his comeuppance under Night Girl. It’s wonderful work, sorely under-appreciated. 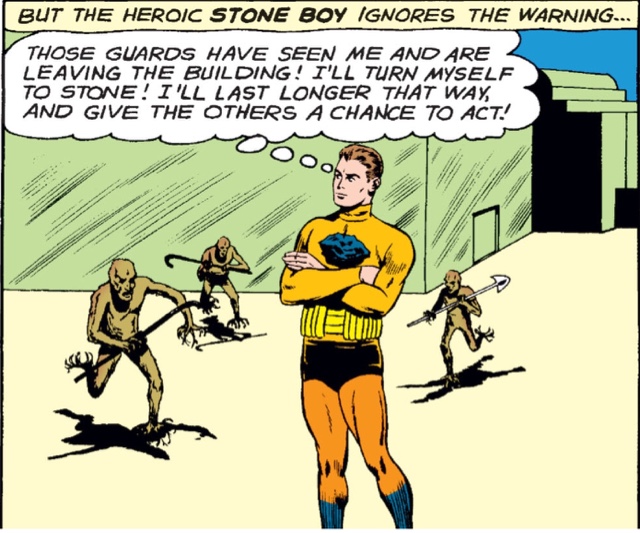 ‘I’ll last longer that way…’ Stone Boy doesn’t assume for a minute that he’ll survive this, but does he care? Nope, he stands proudly, waiting to be smashed to rubble, happy that he’s going out saving the world.

Has any other super-team ever stopped the invasion of Earth with a population explosion? These kids have something, and National Periodical Publications should’ve spun them off into their own series immediately. Already there was a wackiness attached to them. Perhaps Robert Loren Fleming and Keith Giffen thought so too, and that’s how we got to the still-divisive Subs Special of the Eighties. The important thing is, they weren’t the butt of a joke here.

And so ends the debut story of the humblest heroes in comics, leaving just one question. Who the heck got into the team this auditions go round?
Many years, since I first read this story, I still love it. The invention, the heart, the uniqueness of the concept, the sweetness of the characters … it’s not just one of the finest Legion stories ever, it’s one of DC’s best, full stop.

9 thoughts on “Retro review – Adventure Comics #306, the debut of the Legion of Substitute-Heroes”