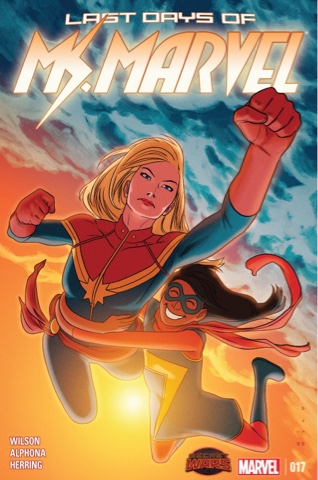 It’s the end of the world as she knows it – and Kamala Khan feels far from fine. The people of Jersey City are panicking, her brother has been kidnapped by evil Inhumans and everyone is looking to Ms Marvel to save the day. The 16-year-old feels, understandably, overwhelmed. 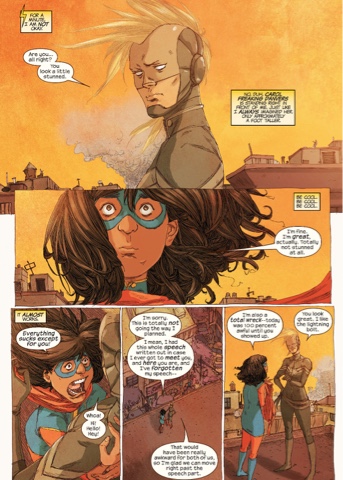 Thank goodness, then, that Captain Marvel shows up to lend a hand. After a minor freakout – well, Carol Danvers is Kamala’s idol – the pair team-up. Carol explains about the colliding worlds business that will lead to the Secret Wars event, and Kamala asks Carol to spare an hour to search for brother Aamir. He’s been taken by her hideous former crush Kamran, who wants to activate his possible super-abilities and recruit him to join again of Inhuman supremacists. By the end of the issue, they’ve found Aamir, but things don’t look too good.
Along the way, we get the beginning of a friendship as the heroines learn what makes one another tick. The tyro Kamala, as we see via a heartbreaking encounter with some abandoned cats, wants to save everyone she meets along the way; veteran Carol gently chivvies Kamala to look at the big picture – if you don’t get on with saving the world, the kitties are gone anyway.
There’s also an encounter with some looters Kamala bumped into last issue, the return of a metahuman irritant and some real inspiration from the two Marvels.
There hasn’t been a bad issue yet, but this month’s Ms Marvel is especially wonderful. Writer G Willow Wilson writes great people, people you believe in. Kamala and Carol’s first meeting is everything I’ve wanted it to be – there’s no traditional fight to precede the inevitable team-up, just mutual respect in the face of a crisis. And Wilson foregrounds Kamala’s faith without slapping you in the face with it. Just look at this. 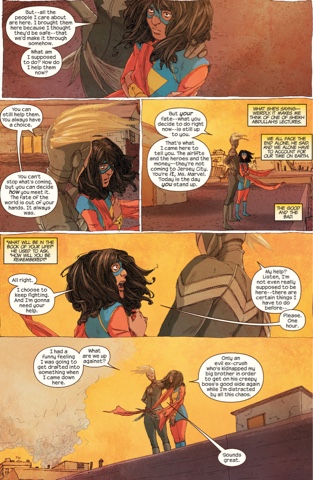 I’ve seen a lot of talk online about who could replace Wilson when she eventually leaves the book – will Marvel be able to find another female Muslim writer to guide Ms Marvel? All of which rather ignores Willow’s all-round excellence; her grasp of narrative, her ability to focus on the micro and macro-Marvel Universe. She’s not a Female Muslim Writer, she’s a writer who happens to be Muslim and female. It also forgets the contribution of editor Sana Amanat to the development of Kamala. I don’t want the current creative team to break up, but I’m not too worried. 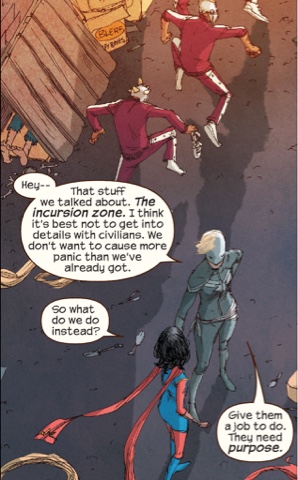 Speaking of the current creative team, regular artist Adrian Alphona continues to make this book look unique. The joyful ungainliness of Ms Marvel as she uses her polymorph powers, the characterfulness of main characters and bit players alike (I always like to spot the strange alien guy and the man carrying the pig), the naturalism of the action sequences, the Jersey City backgrounds … it’s a fully realised world, and one I love to visit. Just look at the fun way the looters – formerly ‘Jersey City’s finest punk electricians’ move. It’s not in the script that appears on the page, it’s extra business that adds to the fun.
Ian Herring’s warm colours are a big part of the feel of this series too, though I’m confused by the colouring of Carol’s uniform as grey this issue. Did I miss something? It’s all very drab. Give me the brights of Kris Anka’s joyous cover any day. As for the letters of Joe Caramagna, they’re as fine as ever – this is the only comic I don’t mind the Ultimates-style upper and lower case dialogue lettering on, somehow it fits Kamala’s voice.
Ms Marvel gets a new number one, I believe, after Secret Wars ends, but the set-up will carry on as previously. Which is more than fine by me – this has been Marvel’s best new book in years, and I’m thrilled Kamala isn’t getting assigned to a space mission, travelling around the world, or whatever. Jersey City is her world, and it’s easily big enough for the size-changing hero who gets bigger every day.