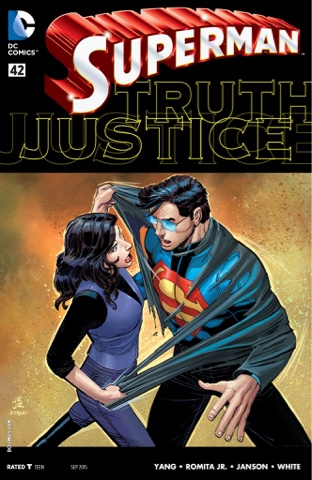 Clark Kent, Lois Lane, Jimmy Olsen and mystery woman Condesa are in the countryside outside Metropolis. They’ve escaped the gunmen who shot Clark at the end of last issue – he’s beaten up, but his powers are returning and he’s okay. Condesa says she’s a whistleblower for an evil organisation known as Hordr. This secret group accesses information, steals secrets and blackmails people into doing their will. It’s obvious they know Clark’s secrets

The four are attacked by shadow zombies, giving Clark no option but to fight them off without changing to Superman. This confirms Lois’s recent suspicions that they’re the same person, but she rips his shirt off to make sure. She’s hurt that Jimmy was told the secret and she wasn’t. 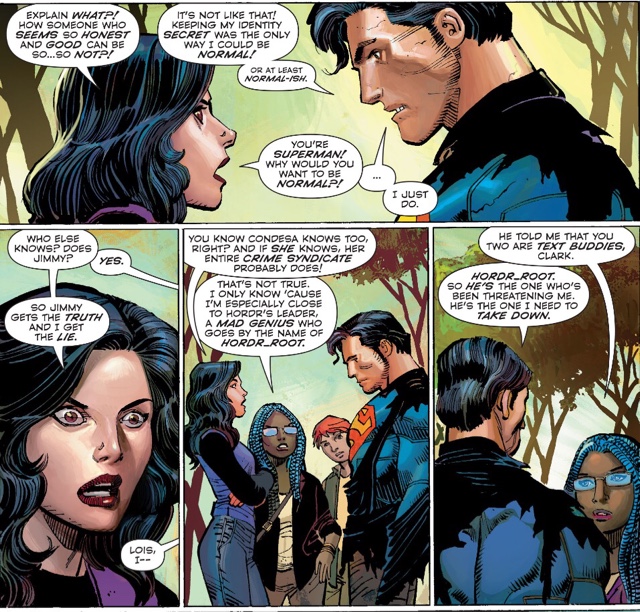 There’s no time to talk it all through – they need to get to Hordr HQ; Clark is thinking James Bond base, but Condesa says it’s a … campus?

So it’s off to see Toymaster in Gotham City to get him to duplicate the masks which Condesa says is the only thing that can get them past Hordr security. That’s when they learn Condesa has a power – she can speak to machines in binary code and make them do her will. They don the masks and catch a Hordr bus on the streets of Metropolis which flies into the air and takes them past a wall of illusion and onto Hordr_plex.

En route, Lois and Clark have a chance to talk. He’s relieved she knows his secret, he now has someone besides Jimmy to talk to – but she’s feeling betrayed. Before they can continue their awkward exchange, they arrive at the Hordr campus.

Jimmy likes it at first – hey, there’s free coffee delivered by a flying van, but Condesa says the smiley masks hide the fact everyone working there has been blackmailed, they have a secret that Hordr’s boss, Hordr_root, is holding against them. A giant projection of the boss appears, announcing that there are three intruders. Condesa slips away, leaving Clark and co to be confronted by security. Grabbing his friends, Clark speeds away, and finds a control centre. There, the boss appears, with the treacherous Condesa by his side. He offers Clark a chance to work with him, is refused, and sics killer robots on the trio. Clark reckons he can fend them off for ten minutes, but is then going to have to use his new solar flare power to explode everything. He tells Lois and Jimmy to clear the campus and stop the boss.

Jimmy finds Condesa, who claims she had no choice but to betray them, and he and Lois give her another chance after Clark goes nova, loses his powers and needs help getting away. As he uses his flare, a figure appears, locks onto him and apparently absorbs the energies he’s losing…

All righty, I’ve gone into big detail there, but I need to in order to, like, discuss stuff. Ah well, I do say Spoilers at the top of this blog. Or maybe the side. Anyway, you’ll have noticed that I immediately tired of typing ‘Hordr_root’, one of those techie names writers like the look of, but don’t consider how to say out loud (see also Eighties Flash computer baddie Kilg%re). Who wants to interrupt their typing to change keyboard layout to access the underscore? ‘Hordr’ is annoying enough, in its zeitgeisty Tindr/Grindr way, but such are the risks of stories tearing from today’s headlines; in years to come, this will seem as dated as Firestorm’s battles with Bug & Byte, but as a story for July 2015, it’s not too bad. OK, the Google/Facebook parallels are rather clunking, but it does tell us exactly what the story is worried about.

Writer Gene Yang (here, I’m not being lazy, the middle name’s dropped with this issue’s credits) gives us some nice moments, chief among them the private discussions between Clark and Lois. Lois revealing that she’s been tracking Superman’s movements doesn’t come across as a betrayal so much as the professional curiosity of the investigative reporter. She wasn’t necessarily going to go public with it. And her reaction to learning that she’s right aren’t over the top – there’s hurt, incredulity, anger … it plays true. As does Clark’s inability to make her understand why he hides behind a pair of glasses.

The later scene builds well on the first confrontation. Take a look. 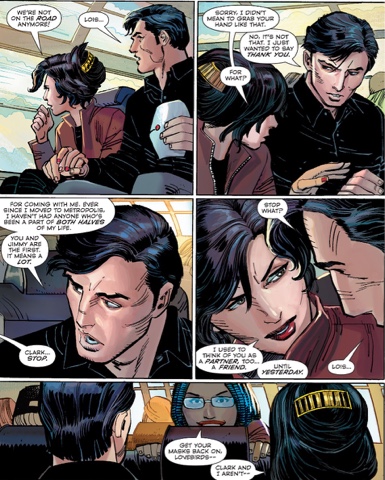 She says he’s not her friend, but instinctively reaches for his hand. And Condesa feels they have a thing. Plus, the mask line is smart.

Speaking of Condesa, I dislike her hugely for this exchange. 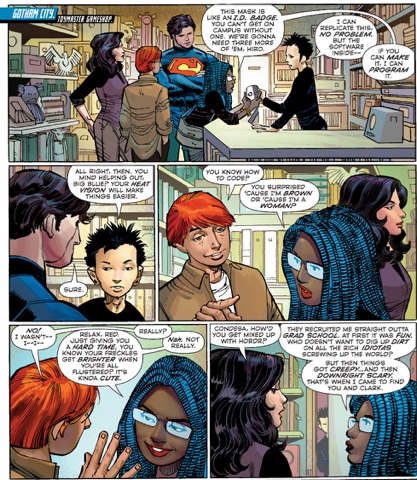 The betrayal to the boss I can understand, she’s being blackmailed (well, so she says – she could easily be the boss herself), but making someone feel uncomfortable in this way is just dickish. I don’t like Condesa – and it’s not because she’s brown or a woman. I don’t know why Yang put this moment in, it’s not cute; I’m all for challenging society’s biases against anyone who isn’t a white guy, but this feels very forced.

This also feels very off. 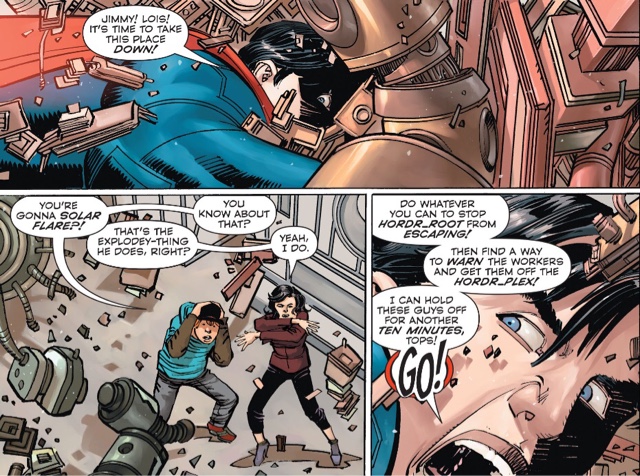 Yes, get Lois and Jimmy clearing the campus, but ask them to put themselves in danger to stop the boss? As it turns out, Lois, in her wonderful Lois way, meets the challenge with style, but it’s not something Clark should have suggested … his best friends could easily get killed.

And again with the solar flare. It’s not a huge surprise, as it seemed the likely route to the depowered Superman of the rest of the line, but more imagination would have been nice. It’s only been around six months or something, and seems to get used every issue.

Better is the hidden figure grabbing super-energy – maybe an update of the Sand Superman, the evil twin of the Seventies who stole a big lump of Superman’s powers during an earlier round of ‘he’s too powerful, we’re not imaginative enough to create stories for him’. I am intrigued.

And other positives are Clark being a lot more competent with his powers, and clear in his morality. Jimmy and Lois are great throughout, valuable partners to Clark, and there’s an enjoyably telling exchange as regards who knows about the solar flare. And despite his stated admiration, look at the back of the fifth panel in Gotham – I think Toymaster cottoned onto Condesa’s dodginess before the Daily Planet’s finest.

So, Yang’s script isn’t a home run for me, but I liked it more than last month’s, and the key Clark and Lois scenes were very good. The art by penciller John Romita Jr,  inker Klaus Janson and colourists Dean White, Wil Quintana and Tomeu Morey is eye-catching, dynamic and hits the appropriate story beats. The aforementioned post-reveal scenes are especially good – the drama is writ large on Lois and Clark’s faces. 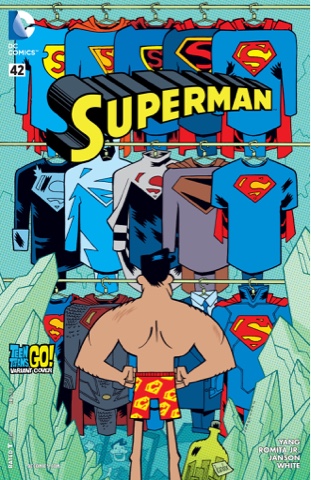 We still haven’t seen Lois reveal Clark’s secret ID to the world, but it seems extremely likely it’ll be to stop Hordr having a hold over Clark. That’s something we can judge when it happens; for now, I’ll embrace this month’s good character moments and look forward to the defeat of Hordr, a group which feels more like a minx than a menace.