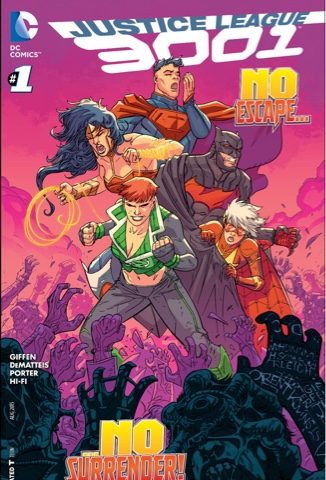 It’s a new beginning for Justice League 3000… it’s Justice League 3001! The future’s most dysfunctional superheroes have conquered bad guys aplenty, expanded their roster and now they’re ready to take on the threat of Starrohe Conqueror. Beginning with their first recorded adventure, the original JLA took the super-starfish down plenty of times, but as we join this story, it turns out this aged version is more competent than previously. Look at who they’ve killed: 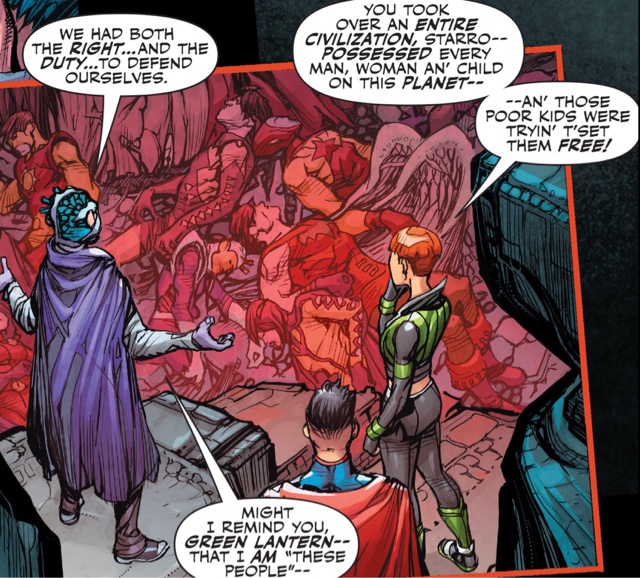 Yes, it’s the 30th Century’s greatest super-teens, the Legion of Super-Heroes. Well, a version of them anyway. As a massive Legion fan, I’m not delighted, but this is an alternate future superhero book, so my personal canon is just fine. It’s not the most inspiring cameo, but still…

The good thing about this opening is that it shows the new League members growing as people. Wonder Woman, especially, shows real compassion here. At one time she’d have condemned the LSH as losers unable to survive a fight, but here she is, keen to ensure they receive respectful send-offs. 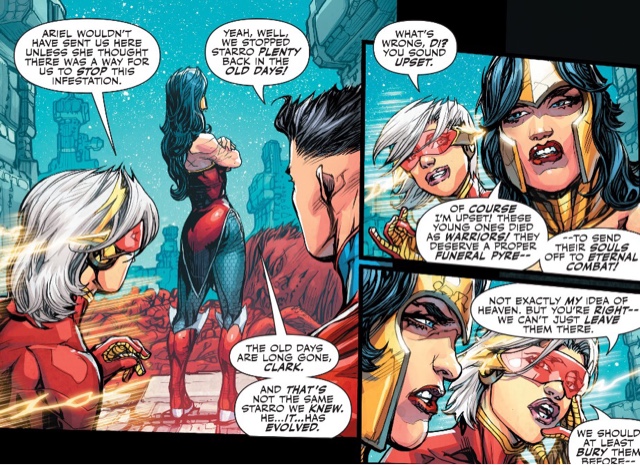 You’d expect the League to start ripping starfish off faces before booting the prime, giant monster into space, but Starro claims he isn’t conquering, he’s legally enslaving – and he’s signed the paperwork to prove it. New member Guy Gardner – reborn in a female body, so let’s call her Gal – speeds off to the Office of Fathomless Bureaucracy to see if this could possibly be true. 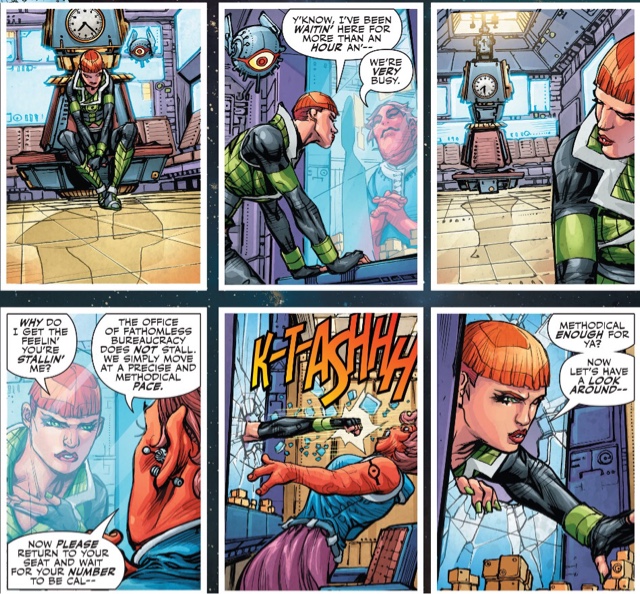 Elsewhere, Ice is missing her recently destroyed cosmic castle, while Fire is pining for her studly demon, Etrigan. They need a distraction, and returning prison planet Takron-Galtos to its original state of Earth-hood could be just the project they need. With luck, old pals Booster Gold and Blue Beetle won’t ruin things with their cack-handed capacity for failed moneymaking schemes. 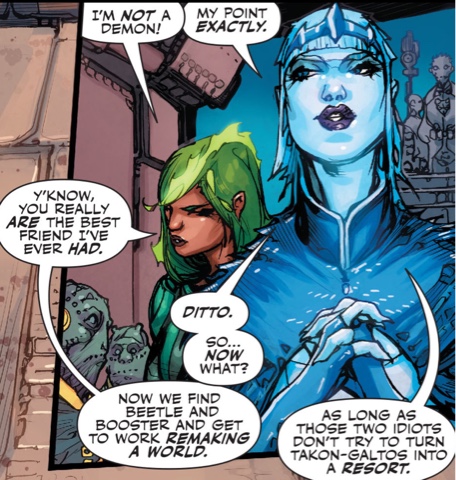 Good luck with that, ladies.

And team monitor Ariel has gone through some changes since we saw her last – she’s been possessed by a member of the Injustice League, another 21st-century survivor. 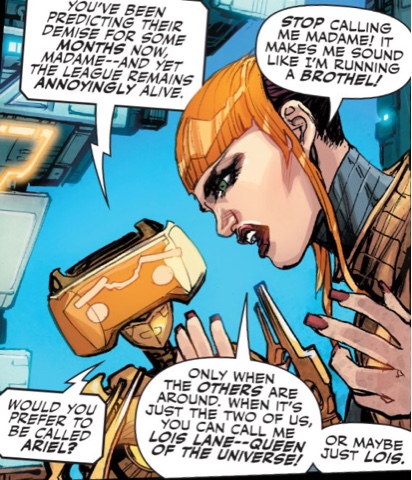 Lois wants revenge on Superman for some unstated slight. But will her right-hand robot, a retooled L-Ron from the Justice League International days, allow her to keep sending the latest incarnation on massively dangerous missions?

And somewhere off panel there’s Firestorm, who’s apparently now running the show. I can’t wait to hear how that happened.
Justice League 3001 is often very silly, but extremely diverting, and far from devoid of drama. Issue by issue, characters who started out as shallow idiots, or base brutes, are becoming more rounded. As well as Diana’s newly discovered compassion, and the Fire/Ice friendship, this issue gives us a great little scene centred on the Batman. 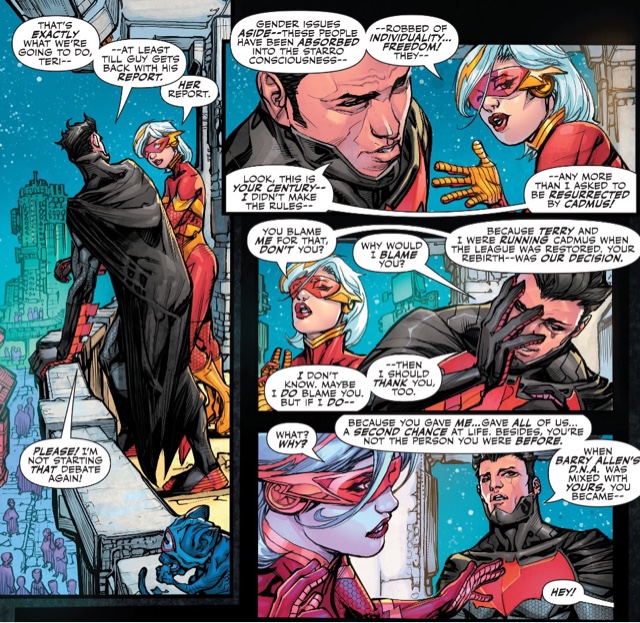 Writers Keith Giffen and JM DeMatteis perfectly pace the story, ladling out plot developments and character at a complementary rate, giving us zippy dialogue and throwing in such verbal Easter eggs as the Helfer System and Boltinoff Treaty, both named for longtime DC editors.

And there’s visual spectacle to spare, as artist Howard Porter fills the pages with dozens of incidental characters and sight gags >pop< while ensuring the foreground action and acting keep our attention. Colourist Hi-Fi adds to the visual interest, making the future even more fascinating than it already is, while letterer Rob Leigh keeps the wordy script looking good.
The book closes with the arrival of yet another refugee from a thousand years past, the original, Silver Age Supergirl. If I had any doubt she’d be handled with respect, the appearance of her original logo, with its blocky letterforms, shows someone is doing their homework. 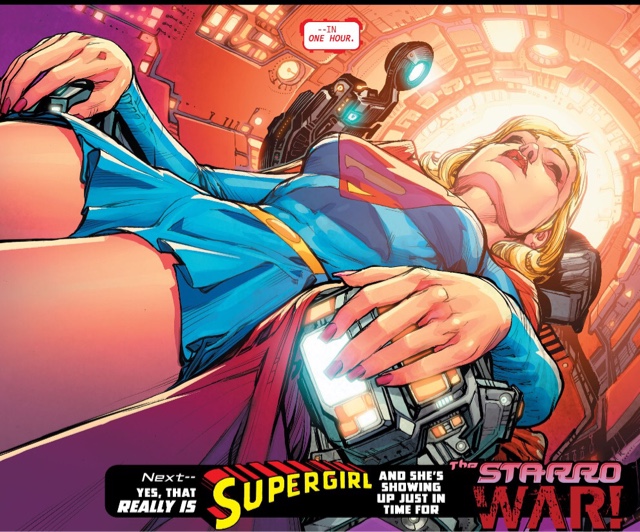 If you’ve yet to try this (renumbered) series, this really is a great jumping-on point, introducing characters, explaining origins and setting up not one, but two promising conflicts. Dive in!