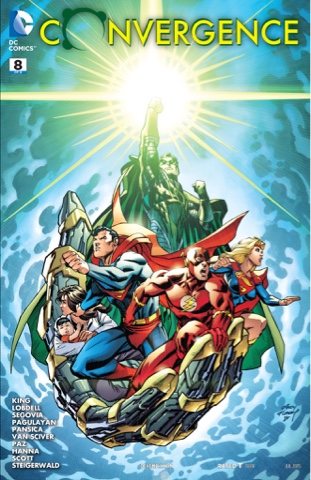 Soooo, most comics I look at, I tend to give a précis of events. Here, such an attempt wouldn’t make much sense because, well, the story doesn’t make much sense. It’s a decidedly jumpy journey to a rather happy destination.

But just to give the overall picture, we have the heroes of various DC realities and timelines on the battle world of Telos, the secret wars over and a chance to start anew offered. Parallax is the most powerful guy around, until it’s Telos, oh, hang on, it’s the all-new, all-monstrous Brainiac … and having seen the error of his ways via a most unconvincing crisis of the soul, the computer tyrant aims to restore the old timelines, in a bid to become the simple villain of days past. But the plan demands a sacrifice or two…

Blah, blah and indeed blah. The heroes go back to fight in the original Crisis on Infinite Earths (COIE) in a bid to ‘prevent the collapse of the multiverse’, so saving every reality. 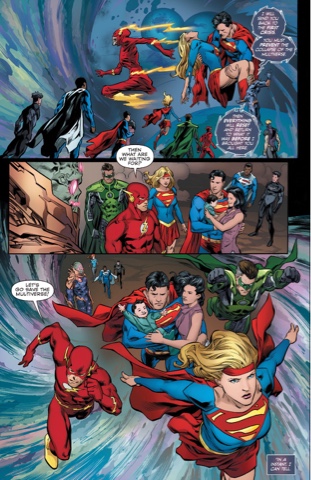 Yup, forget what you read, as of now, a reality-devouring wave didn’t wipe out thousands of Earths, leaving just five Earths to merge into the continuity that ran from the late Eighties to 2011, giving us the likes of John Byrne’s Superman and George Perez’s Wonder Woman. They all survived.

This concluding chapter also sees Telos the person, not the planet named for him, remembering who he was – but the reader never learns. At some point during the apparently on-the-fly scripting of this series, it was decided to change Telos from villain to victim to potential hero. It seems like someone at DC intends to use him again. I’ll wager that one day he’ll be as popular as such created-for-crossover characters as Harbinger, Pariah, Waverider and dear old Access. 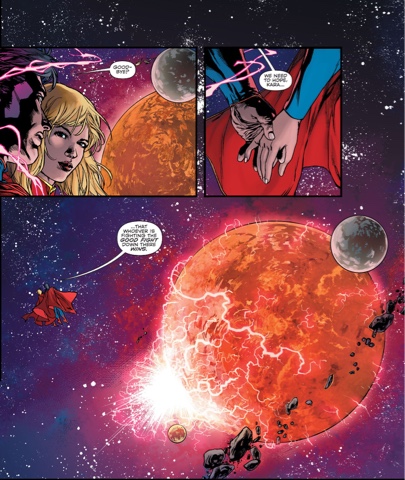 I did enjoy that the current canon Superman gets to be inspirational, a fundament of the classic character too little seen since 2011’s universal rewrite.

I’m not going to think about any of the details too much, that way lies a cosmic headache. Let’s just say that writers Jeff King and Scott Lobdell sell this about as well as anyone could, with plenty of big moments and melodrama. It’s a real page turner, with much promise as scene builds upon scene.

I’d like to give a big hand to Andy Kubert for his cover, which beautifully spotlights the perfect collection of characters. And pencillers Stephen Segovia, Carlos Pagulayan, Eduardo Pansica and Ethan van Sciver, a battery of inkers and a pair of colourists work very hard to sell the script, bringing in the money shots – such as the world of Telos being cleared before its transformation into a new New Earth 2 (Earth 2.2?) – with pizzazz. The crowd scenes, of which there are many, look great, and the two spreads showing the new celestial order, are winners. 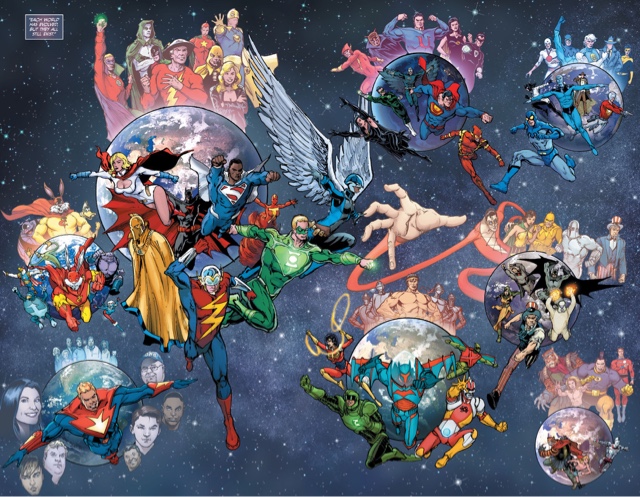 For a second, I was thinking that the undoing of COIE meant the original Earth One, Earth 2 and so on were restored, but it seems not. Telos tells us: ‘Each world has evolved. But they all still exist.’ So Earth One has still been succeeded by the New 52 Earth Prime, the original Earth 2’s Jay Garrick and co have been replaced by the still-not-the-Justice-Society’ we’ve been given of late. Even good old Earth C has had a makeover to bring it in line with Grant Morrison’s Captain Carrot. And in between there was the aforementioned Byrne Superman, Perez Wonder Woman and their chums. But now they’re gone again, kids. Hence the smiley floating figures behind each Earth.

But still, there’s a lot of good, here. Given this two-month event was originally assumed to be a last hurrah for the heroes of dumped continuities, to have seen them get happy endings before ‘evolving’ back into comics limbo, well, that’s something.

And the parallel worlds as described by Grant Morrison and friends in the rather lovely Multiversity Handbook survive, to be visited as and when.

PS You know every one of those pre-Crisis worlds we’ll never see again? We’ll see them again. Ssssh!