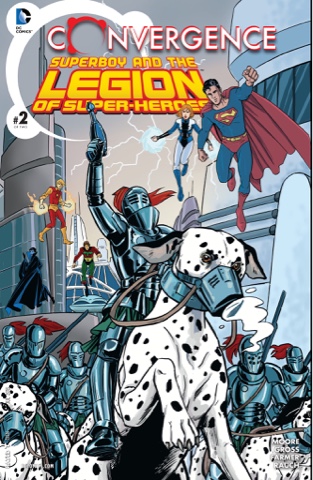 Now this is more like it. The first part of this Convergence tie-in serieswas pretty good, but the conclusion – due in large part to an artistic team channelling a classic Legion look – is great.

The Legion of 30th-century Metropolis has been ordered to war on the champions of the post-apocalyptic town of Durvale, the Atomic Knights. The Legion is around two dozen heroes with awe-inspiring abilities. The Knights are folk in medieval armour riding oversized Dalmatians. The likely winner of this bout of cosmic jailer Telos’s contest seems obvious, but the Knights have something extra – while the Legionnaires are rusty and reluctant to take on opponents weaker than them, Knights leader Gardner Grayle is fighting mad, determined that his little community of 1980s people will live. He unleashes the fury of the Knights’ blasters and actually manages to keep the Legion at bay.

It’s only the return – for the 100th time – of the thought-lost Wildfire that turns the tide, forcing Gardner to play his trump card. 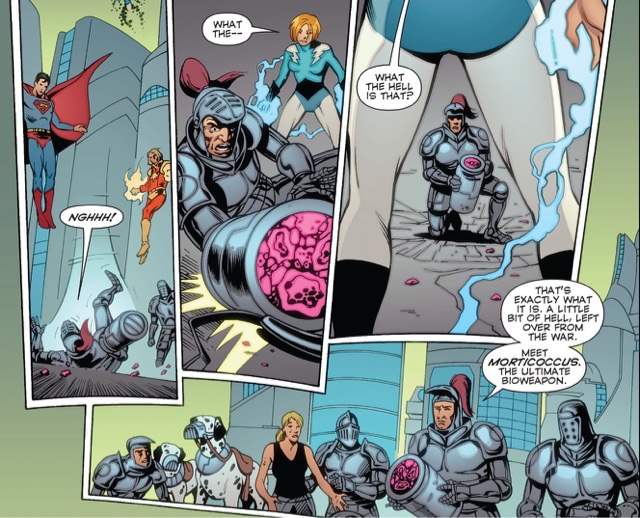 Yep, it’s Mortococcus, the virus from DC’s Countdown series that makes people sick, then turns them into the talking animals of Kamandi’s Earth. This version, though, simply kills.

The threat gets the Legion’s attention, but Superboy, showing the team’s making him temporary leader is justified, talks Grayle down from using it. The Knights’ resident scientist, Bryndon, meanwhile, has been teaming up with the Legion’s Brainiac 5 in a bid to crack the secrets of Telos, and they believe they’re on to something. Apparently there’s a second planet converging on the world on which they’ve been imprisoned. Before they can work out what that might mean, an earthquake hits, and Superboy winds up rescuing Lightning Lass who, you may remember, was flirting with him last time. 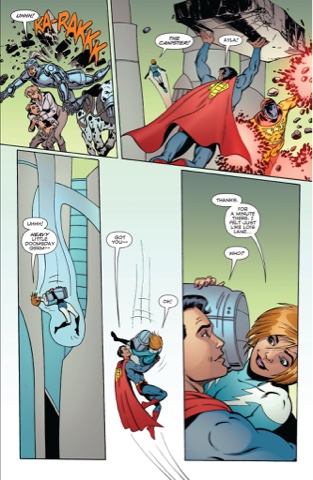 By issue’s end, everyone is pals and ready to take the fight to Telos.

If this version of the Legion survives post-Convergence, I’ll be delighted – having a world where the original Superboy continues to travel between times would be great. For now, I’m happy to see him with the 30th century’s greatest super-teens just one more time. Stuart Moore really captures the peak flavour of the team with his script, while Peter Gross – in what I believe is his Legion debut – produces some lovely clean layouts, full of sharp figurework and storytelling. Finishing the art job is Mark Farmer, no stranger to the Legion, and he ensures everyone is thoroughly on model. Gross and Farmer make a spiffy team, with nods to the great days of Keith Giffen and Larry Mahlstedt in approach and execution. I especially like their ability to convey the flight ring weightlessness of the team. And John Rauch’s brightly balanced colours just make things even better, with the tones employed in the Atomic Knights’ candlelit bunker especially effective. 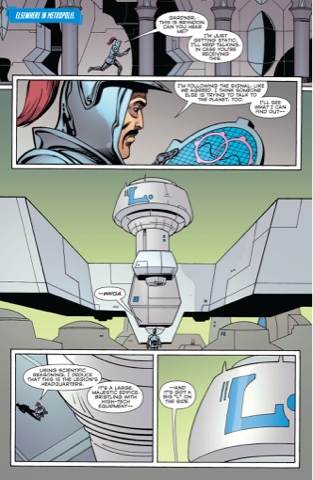 Highlights of the issue include Bryndon’s witty discovery of Legion HQ, a welcome moment of light-ness amid a generally serious story, and the intense – yet not over the top – reaction of Grayle to the situation. I like the incidental shrinking to normal size of Colossal Boy, and Superboy’s dalliance with Lightning Lass (well, she is an LL). And it’s good that Moore doesn’t bother trying to explain why the Knights’ weaponry can give the Legion a tough time – it’s simply that powerful.

The only thing I can’t praise is the flashback to Clark’s Smallville childhood, featuring the most sinister Pa Kent ever. 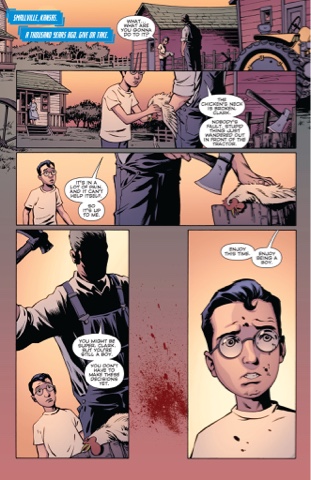 Mercy killing a chicken with a quick, brutal chop, pretty much making Clark watch, steeped in shadow – there’s a life lesson here, but it’s a tad heavy handed. Maybe it’s meant to show us Smallville isn’t as idyllic as Clark claims to his future friends but, actually, I’m good with idealised. It’s effective work from the creators, what with the compositions, the silent blood spatter panel and all, but don’t do it again!

Even with that qualm, I heartily commend this two-issue micro-series to Legion of Super-Heroes fans. Unlike Superboy, we can go home again.

6 thoughts on “Convergence: Superboy and the Legion of Super-Heroes #2 review”