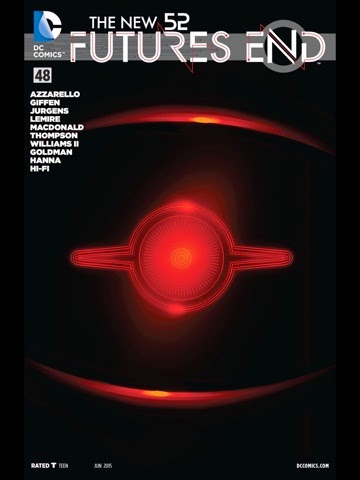 Looking back to my review of Free Comic Book Day offering Futures End #0, I was really looking forward to seeing where the book went after such a strong start. And the answer is, all over the place. It’s been the Lombard Street of comics, turning on a dime. There have been some great moments – the revelation of Lana Lang’s powers a couple of issues back, for one. Frankenstein’s death scene around the same time, for another. The return of Superman. But then we had to put up with issue after issue of Plastique, the Key and that other fella wittering on about nothing (the redesigned-to-bad-effect Plastique never tired of calling boring ‘Batman Beyond’ Terry McGinnis by the beyond irritating nickname ‘McG’). John Constantine hanging around to no effect. Mr Terrific being anything but. And that man McG redefining dullness.

Still, a strong finish could make me forget lots of that. And it looked like we were going to get that, as this issue begins with the Tim Drake of 2019 having travelled to the future of 2049 from a trip to 2014, to see if he’s averted a horrific future. He’s taken up the a Bat-mantle of 2049’s time travelling McGinnis – now dead, oh well – having given up his Red Robin identity due to some spat with Batman.

He finds himself in a beautiful garden, full of statues of superheroes; whether it’s a memorial to dead heroes or a celebration of live champions isn’t clear, though one of the warriors represented is live and kicking and watering the plants – Madison Payne, the latest Firestorm. Cue a lovely reunion between Tim and his onetime girlfriend … and the revelation that it’s all just a hologram. He’s been snogging a light construct – a ruddy fine one, apparently Brother Eye gives good tongue. Then Mr Terrific shows up to poor-me about the fact that despite Tim’s efforts, the world still went to hell in a handbasket.

The Zombie-Omac heroes from the Free Comic Book Day issue storm Terrifictech and while Tim fights back, Mr Terrific just can’t be arsed to defend himself. It’s the non-dynamic debut of Mr Flaccid. Fortuitously, the ragtag holdout heroes show up – and it’s been so long since we’ve seen them that it took a few panels to click as to who they were.

Heroes beat villains and retreat to their secret headquarters, where the Atom points out that, well, I was going to lay it out, but I don’t actually understand it. Neither does Mr Flaccid. 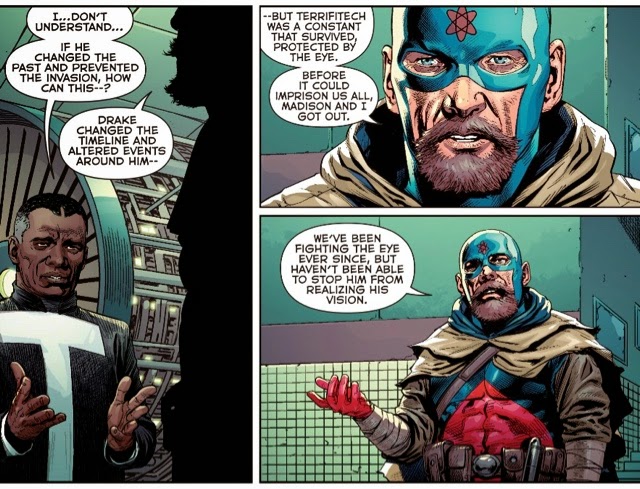 Anyway, basically, Tim saved the day and yet didn’t. Work that one out. In better news, Tim gets a big surprise. 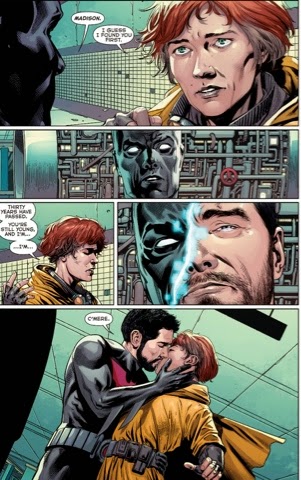 It’s a lovely scene, the best of the issue – warm and true. It’s just a shame it comes amid a final chapter that pretty much puts us back where we started.

Surely DC intended the heroes to save the day? They’ve had the equivalent of four years of normal schedule comics, yet here we are with no decisive conclusion, just a new Batman Beyond swearing to beat Brother Eye, as did his predecessor, who got murdered by him. Did DC decide late on that they wanted older Tim to star in a new Batman Beyond book (because that’s what we’re getting) and change the planned ending? I was hoping for not just hope, but certainty; the sure knowledge that the sacrifices had been worth it, that tomorrow had been saved. Instead, the 49th and final instalment of Futures’ End becomes the zero issue of Batman Beyond. Having spent $150 on this series, I want more than that.

Really, I wanted the electronic smile wiped off Brother Eye’s stupid face – I am so sick of Brother Eye and Omacs, they seem to have been omnipresent in DC Comics for about a decade now with their ‘eye this’ and ‘eye that’. ‘Eye’ say cut it out, let the heroes have a decisive win against the annoying AI, already.

Instead, Brother Eye continues to rule the world.

I do like that Tim has thoroughly lifted himself out of the funk he was in at the start of this series, but, well, it’s not enough. In official continuity we’re still stuck with the intensely unlikeable, new personality Tim Drake of Teen Titans.

Writers Brian Azzarello, Jeff Lemire, Keith Giffen and Dan Jurgens have the talent to deliver a satisfying finish but for me, whether editorially mandated or not, they dropped the ball.

It takes four pencillers and one inker to bring us Futures End #48 and as usual, editors David Pīna, Joey Cavalieri and Matt Idelson don’t specify who did which pages. So let’s just say everyone did just fine, with at least one artist/team turning in outstanding work – the scene with Tim and older Madison.

My comics reviewer chum Matt Santori-Griffith – check out his take on this issue at Comicosity – tells me Futures End artist credits are always in order (ya coulda told me a year ago!), so this would be the work of Stephen Thompson, rather than penciller Allan Goldman and inker Scott Hanna, Freddie Williams II or Andy MacDonald.

Oh, and the opening spread is pretty gorgeous – Goldman and Hanna, says the formula – though there’s no motivation for Brother Eye’s deception. 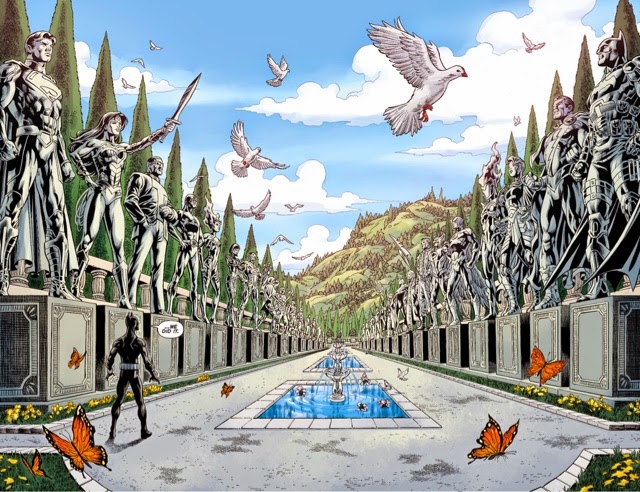 I can say without qualification that the colour work of Hi-Fi is exemplary, while Tom Napolitano (a relative of fellow comics calligrapher Nick Napolitano?) does a nice job of lettering.

Ryan Sook has produced cover after wonderful cover for this series. He produced this issue’s, too.

So goodbye, Futures End. You wanted to be 52 but managed only Countdown.