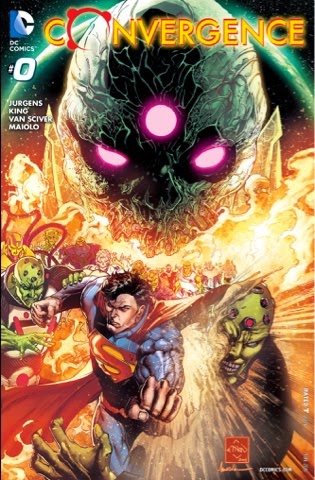 Trapped on an unknown world by a massive, monstrous Brainiac, with no idea why he’s been brought there, or even how long it’s been since he arrived, Superman is frustrated. Well, in his civilian life he’s a journalist, a dealer in facts. Here, his captor delights in dropping, dripping hints about his plans, refusing to give the Man of Steel the big picture.

He chains Superman to a wonderfully organic Kirbyesque set-up and shows him different versions of the hero’s death, dying Supermen from throughout the Multiverse. While Brainiac currently has the upper hand, it bothers him that not one of the demises has been at the hands of one of his ‘extensions – it’s always been Superman’s compassion for others putting him in the firing line.

Still, Brainiac has something to distract him – information from his prisoner’s mind that will take him to Superman’s home, ‘his cities’. He vanishes, leaving Superman chained. But not helpless – the immediate threat to Earth gives Superman the resolve, the extra strength, to break free. And soon he finds … another Brainiac, and another, and, well, seemingly dozens of versions of the villain. Are these more of the ‘extensions’ of which the jailer Brainiac boasted? 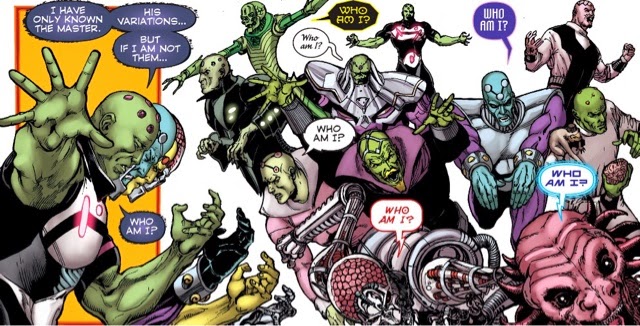 In fact, they’re forms taken by the spirit of the world on which Superman is standing, a sentient planet enslaved and terraformed by Brainiac to house the cities he’s collected from dying realities. Because they’re on his world, the spirit is content to be their caretaker, believing they’re better off under a dome, than dead. Which is inarguable, but Superman is angry that a third option – saving the people, freeing them and letting them build a new world – has been rejected. Trying to appease him, the being offers Superman his choice from a Metropolis mash-up.

When Superman tells him to, basically, bugger off, the creature sends him home, wiping his memory of events, and taking on a new form. His encounter with Superman has seen him conclude that Brainiac is running ‘a failed experiment’. Instead of simply being a caretaker, while his master is away he’ll give the cities a chance to change their fate – battle one another for the right to return to the universe.

And, small details aside, I’ve given away pretty much everything that happens in this issue. But DC got there first months ago, telling us the basic set-up and showing us the new villain, who is yet to take the name Telos (that’s one for students of philosophy/Doctor Who). I will say that this zero issue is well worth your time and money if you’re at all a fan of DC crossovers.

Because co-writer Dan Jurgens really knows how to kick off a fun DC event, having given us Zero Hour in the Nineties and been involved with loads of big Superman stories. The Superman in this issue is the post-Flashpoint guy – this story takes place in between Action Comics #34 and #35 – but he reads as the guy recreated post-Crisis by John Byrne and perfected by Jurgens, Louise Simonson, Jerry Ordway, Karl Kesel, George Perez and co. He fears as to what Brainiac has grabbed from his mind, but there are no wobbles as to whether he’s up to the task of beating the Collector of Worlds; he’s too determined, too focused to let the thought of failure cross his mind. He’s all hero, all Superman. 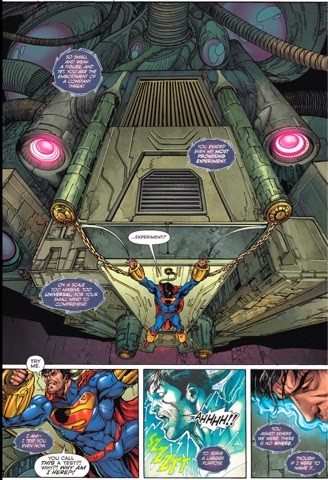 I don’t know how Jurgens broke down the chores with TV writer and comics debutante Jeff King, but they work well together, producing a pacy event kick-off that begins with a big mystery and opens out to unveil bigger ones. Yeah, the Convergence event is a big old summer cash grab, but with King overseeing the stories, it also looks set to be a well-plotted and executed, massively entertaining carnival of superhero chaos. I can’t wait to see characters from DC’s past – long term continuities and one-off ‘imaginary stories’ alike – clash in a true battle of the planets. And I’m rooting for every one.

It’s pretty unusual these days for an extra-length issue to have just the one artist, but Ethan Van Sciver pencils and inks the entire book, producing stunning pages. I swear, this is the work of his career – beautifully composed, insanely detailed, the zenith of DC Comics art and a real challenge to the other artists in this 40-book event to step up. His Superman is pure Jurgens, his bevy of time-tossed Brainiacs spot-on and the picture couldn’t be bigger – Van Sciver knows ‘cinematic’ means more than ‘monotonous letterbox panels’. I wish DC hadn’t pre-released the spread showing the deaths of Supermen past – it’s a killer, and would have had huge impact had the reader been left to come across it. Still, there are some wonderful big moments I’ll leave anyone who hasn’t read the issue yet to discover. 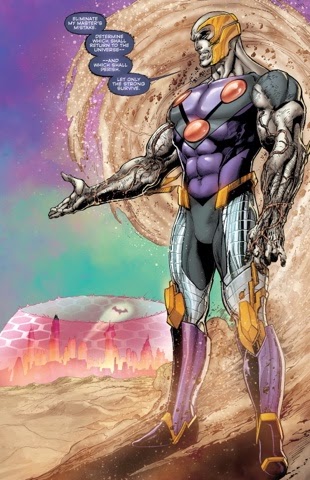 And while Van Sciver may have designed Telos, I’ll need some convincing – this is the most Jurgens villain I’ve seen since, well, the last one. It’s rather comforting, actually. 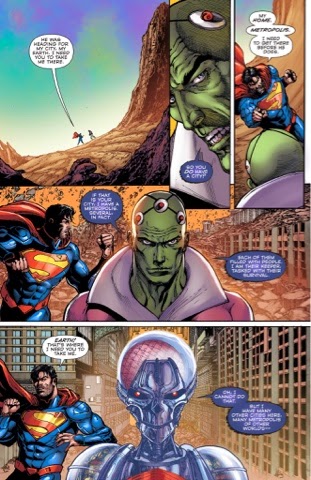 Marcelo Maiolo colours with real pizzazz – he perfectly represents the sweet pinks and greens of Silver Age Brainiac, for example, and his skies are ice-cream edible – while Travis Lanham’s sharp, confident lettering is a real asset to the book, which has been put together by editors Dan DiDio and David Pīna. After the horrible disappointment of this week’s concluding issue of Futures End – from which this issue’s prime Brainiac stems – Convergence #0 is a real pick-me-up.

And not just for the story, as ten pages at the back, preceded by a breezy intro, detail the worlds at war. And one of ’em is… 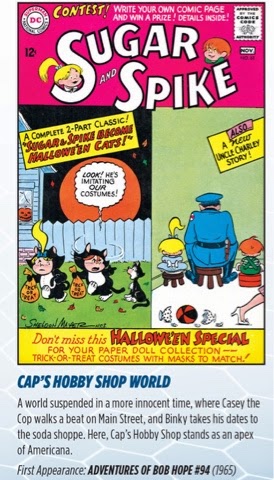 … now that’s the kind of surprise I want. And I’m very intrigued by the supposed debut issue of this Earth – has anyone actually read Adventures of Bob Hope #94? Because as to why it’s been namechecked, the superb Grand Comics Database gives me no hints, Cap’s Hobby or otherwise.