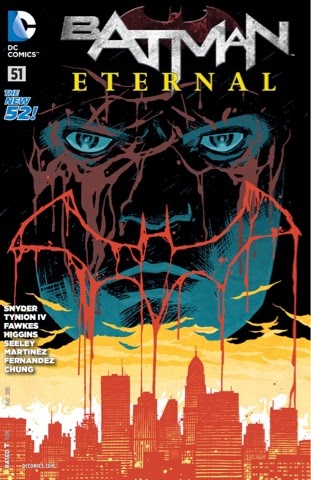 So, last week we had the big reveal as to just who’s been bedevilling Batman and friends for the last few issues … Cluemaster.

Apparently there was a lot of grumbling after Batman Eternal #50 that Stephanie Brown’s dad isn’t a big enough name to be the mastermind who’s brought Gotham City down around Batman’s head. This issue we finally catch up to the scene which kicked off Batman Eternal #1 – the Caped Crusader unmasked, bloodied and bound, at the mercy of the mystery man we now know to be Cluemaster. And in this exposition-filled issue – plotted by Scott Snyder and James Tynion IV – he makes his case, explaining how it’s his very D–list status that let him plan, and enact, his scheme. 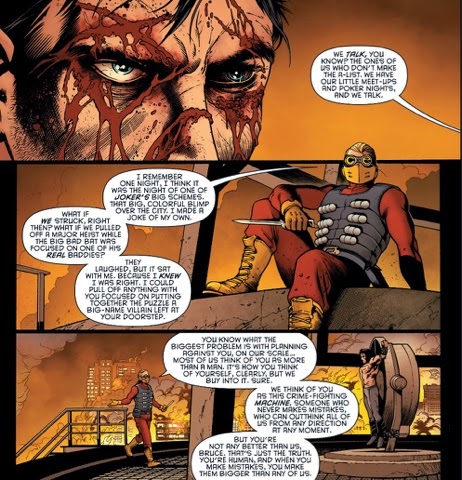 And it makes sense to me – tired of being a joke, someone ‘you probably don’t have a file for on your computer’, Cluemaster pulled Gotham down, brick by brick. And now he’s ready to put the cherry on the cake by killing Batman.

Meanwhile, the other members of the Batman Family are firefighting, figuratively and
literally. Red Robin, Bluebird, Batgirl, Red Hood … they’re all trying to save lives. Spoiler, though, throws a wobbly, and decides it’s time to get the heck out of Gotham, save her own skin. She’s been through a lot in the course of the series, so the instinct is forgivable. The true test is whether she does indeed head over the Trigate Bridge and away to a quieter life.

Finally out of prison, Jim Gordon is back at Gotham PD – but will he take up the mantle of commissioner again when it’s offered by Jason Bard? And Catwoman can’t decide whether or not her crime family should follow up on Cluemaster’s suggestion they get out into the streets and just take what they want.

Talky as Tynion’s script is, it’s pacey, fun and smart, and I’m delighted to get some answers, and to see the recently corrupted GCPD back on the road to righteousness. Plus, there’s a twist in the last couple of pages, as a character shows up just in time for the finale. They’re not one of my favourites, but they’ll certainly add extra spice to the close of Season 1 of Batman Eternal – and Cluemaster’s detractors should be happy that a more famous name is set to be the final foe.

The big story this issue is the artwork of penciller Álvaro Martinez, inker Raul Fernandez and colourist June Chung. Martinez has a knack for the dramatic moment, whether it’s about Selina Kyle showing an underling who’s boss, or a clever bit of  body language; Fernandez crisps things up beautifully; and Chung brightens and balances the compositions with her digital paintbox. Just look at how they make what’s essentially a talking heads sequence sing. 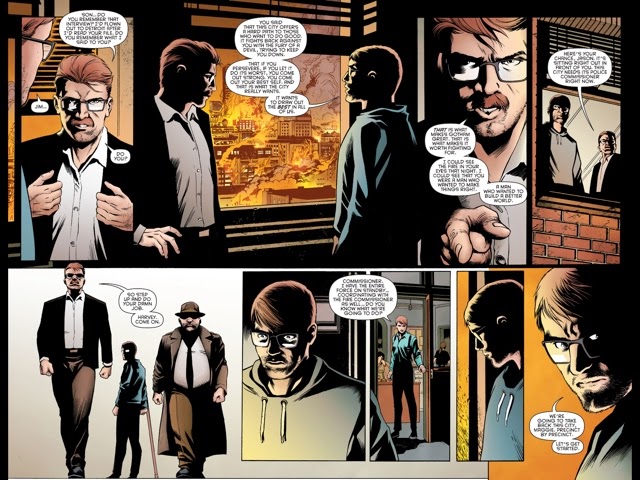 And their Selina is simply stunning. 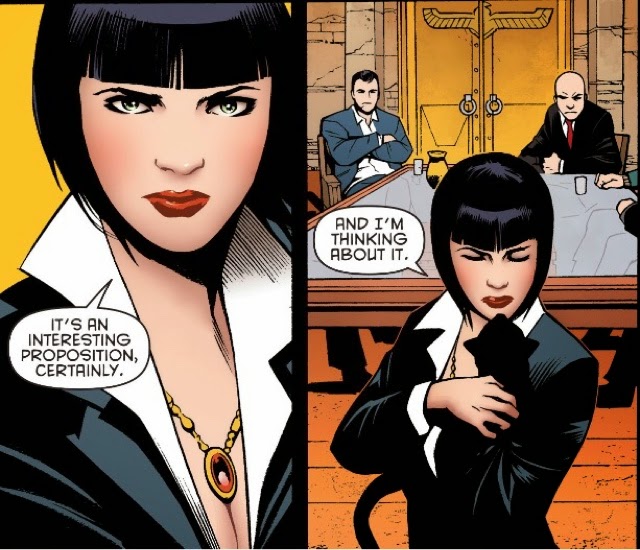 Cliff Chiang provides the latest in a run of superb covers – heaven knows how editors Dave Wielgosz, Chris Conroy and Mark Doyle will settle on a handful to adorn the trade collections.

So, one more issue to go. Let’s hope the wrap-up is as good as this penultimate instalment.