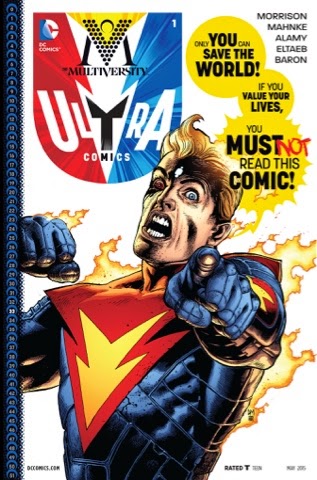 Well, that was a trip. It may also have been a trick. It’s difficult to know with Grant Morrison’s Multiversity project, which sees an armload of comic books combine to make us question what it means to invest – financially and emotionally – in the art form.

This penultimate book – next month everything wraps with The Mutiversity #2 – is the most self-referential yet, as we readers combine wills to power Ultra Comics, the Man with the Multi-Mind. We even gift him a certain way of hearing himself. 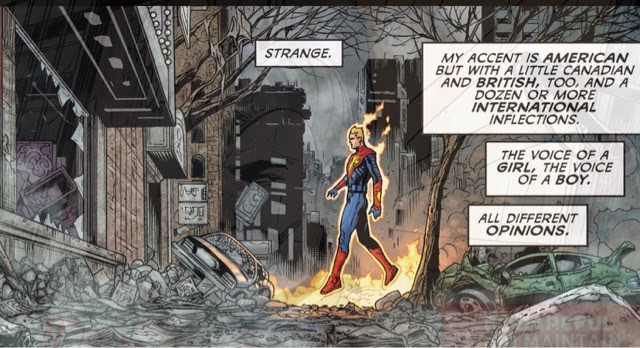 Consciousness is swiftly followed by self-consciousness, as Morrison has a playful dig at comics’ ever-changing toolbox. 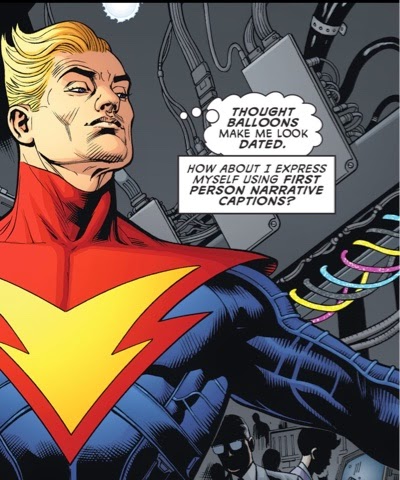 He’s sent from his little bubble of Earth Prime somewhere else, and quickly goes from shocked to unimpressed. 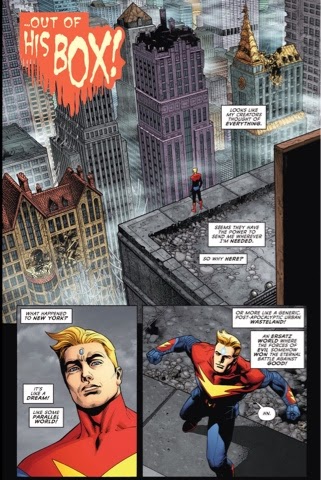 But he sees a mission, grasps the nettle and is soundly stung. By ‘Super-Cannibals’. The threat of being eaten alive is a prospect so primally horrible, it’s one of the few notions, Morrison realises, that can get the reader caring – otherwise, Ultra Comics is just another superhero in another death trap, one treading ground already claimed by Animal Man in Morrison’s acclaimed run, behind a cover homaging a classic Flash image.

Can we readers help Ultra Comics escape it?

And have I just been insulted?

If so, Morrison regains my goodwill by asserting that humble reviewers have a part to play in comics culture that’s actually rather useful. And the secret of the box that everyone is terrified of makes for a smart, satisfying reveal.

Earth Prime, aka Earth 33, is a version of the Silver and Bronze Age Earth Prime, ‘our world’, where writers such as Gardner Fox, Cary Bates and Elliot S Maggin received the plots for their comics in the form of dreams transmitted from other Earths. That’s where we met the hero Ultraa in an issue of Justice League of America in the Seventies, and he’s here, along with lots of folk with similar names (one of whom dates back to the Golden Age), a Jack Kirby-style kid gang, a subtle Clark Kent cameo and that oddball egg-with-wings-monster who’s been popping up throughout the Multiversity one-shots.

It all makes for the nuttiest of rollercoaster rides, but Morrison keeps things coherent on the way to the finale. My favourite pages see Morrison lay out some rules. 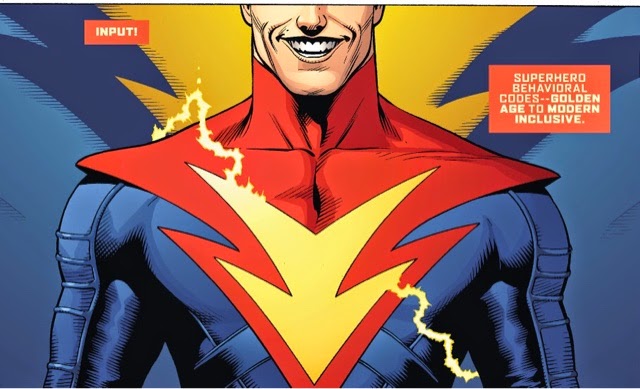 What follows is just perfect, and perfectly sad. Like the rest of the issue it’s pencilled by Doug Mahnke, whose storytelling instincts mesh superbly with Morrison’s. He sells the big daftness of it all, determined to do his part in dragging us into the comic. Mahnke has done well to design a costume that would suit any era of superheroes. It most closely evokes Jim Starlin’s Adam Warlock, he of the Soul Gem, lightning chest symbol and snooze-inducing self-conscious ramblings. This comic is undeniably self-aware, but Mahnke’s strong, crisp, breezy linework helps keep things from getting dreary as omniversal horrors close in. The multiple inkers – Christian Alamy, Mark Irwin, Keith Champagne and Jaime Mendoza – help sell the idea that Ultra Comics lives in an unreality that could change at any moment. And none of the quartet’s styles are so different as to be jarring. I like that Ultra Comics looks a little bit Miracleman here, with his shimmery floating, and a tad Superman there, with his determined flying. It just works, aided by the attractive colours of Gabe Eltaeb and David Baron, and sharp letters of Steve Wands.

All in all, this is a 40-page love letter to the lunacy, legends and legacies of the DC Universe. And I’m happy to report that no harm came to me while …