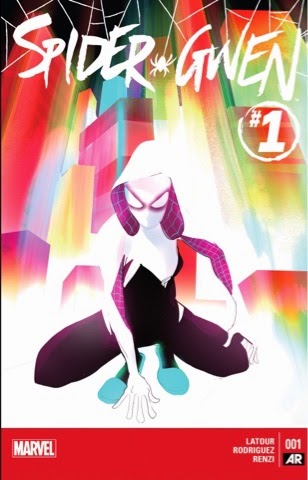 When Spider-Gwen broke big a few months back I quickly downloaded a copy of her debut story in Edge of Spider-Verse #2, ready for something amazing. What was the x-factor that inspired heaps of positive reviews, sparked acres of Twitter chat and birthed dozens of Tumblrs?

Darned if I could tell you. I saw a competent, entertaining story, What if Spider-Man was Gwen Stacy meets Josie and the Pussycats. The dialogue was decent, the title character sharply sketched, the art bright and kinetic … but what was getting people so excited?

The costume? It’s certainly striking, with an unusual colour scheme, and a perfectly impractical hoodie element, but is that enough?

Whatever the case, something connected with audiences and Marvel immediately ordered a series. And on the evidence of this first issue, I’m glad they did – I still don’t see what’s so unique, but I do see an extremely well-crafted comic book that feels like it’s of today.

Continuing from her debut, minus an interruption for the Spider-Verse story, Most Wanted Part 1 sees Gwen on the outs with pop group The Mary Janes for overly angsty drumming, as her police captain Dad George tries to come to terms with the knowledge that his daughter is his toughest professional headache. Yep, she may be a Stacy, but Gwen certainly has the old Parker luck.

It may have transferred after Peter died in this universe, because Gwen’s Spider-Woman got the blame, making her father her biggest problem. He’s coming around, though, even as a new criminal emerges, jealous of the attention she’s getting – the Vulture.

Gwen reckons she could do with an arch nemesis… 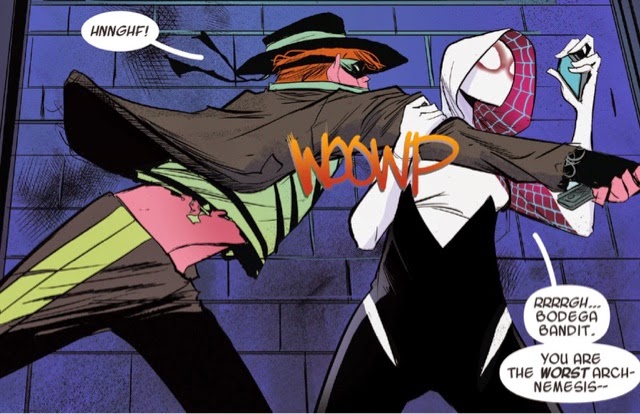 Sequences like this may be what’s propelled Spider-Gwen to Marvel A-list status after just a handful of appearances – she has the attitude and charm of early Peter Parker, a model that, when pulled off, simply works. The costume brings its problems, but it’s also a release from more mundane matters and the perfect mask behind which to practice her quipping. The scene in which she tries for a small reward for her heroic efforts is classic Spider-Man. 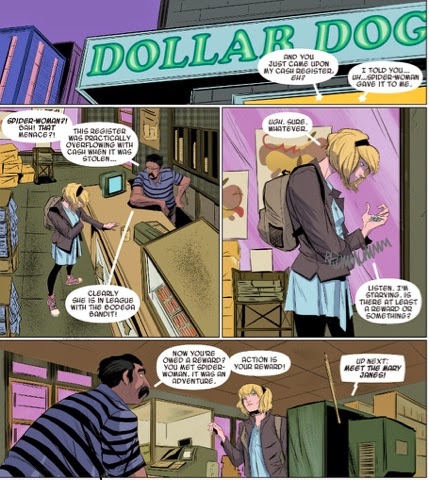 While I’m not a great fan of superhero as graffiti artist, I must admit, writer Jason Latour makes it work for the story here. Who knows, he may even get me liking the pop group aspect, which to me is the stinkiest of stinky cheese – I somehow missed that teenage phase of wanting to be in a band, and have no interest in seeing Gwen bash a drum like she does her foes.

I do like most of Latour’s alternate world choices – Matt Murdock as a dodgy fixer, Ben Grimm as kindly street cop, Glory Grant as actually present – and the feeling that he has a definite journey planned for his Spider-Woman. I’m not keen on MJ as surly pop princess, but she can change. Another thing I’m not happy with is the occasional cussing – well, comic book cussing of the !?@£&* variety. I’m old enough to still want to see heroes as role models for kids, and a good vocabulary is so much nicer than casual swearing. The heck with ‘realism’, this is a comic about a radioactive girl who’s not got cancer…

The pace and pep of the script is matched by the art of Robbi Rodriguez. The pages pop with lively images that perfectly complement the story – Gwen out of costume is as interesting as Spider-Gwen, so telling is the body language. And Rodriguez’ take on the Vulture is traditional with a side of terrifying. The colours of Rico Renzi are a big part of the artistic success of this comic, unafraid to be bold without going over the top. And Clayton Cowles’s letters are spot-on, as ever.

So, I still couldn’t say what the X-factor is; maybe Spider-Gwen’s success is down to ‘nothing more’ than the synergy of a talented, enthusiastic creative team hitting the perfect zeitgeist moment. Whatever’s going on, I’m glad it’s produced this rather delightful read – I may not be its exact audience, but I’m certainly a happy customer.