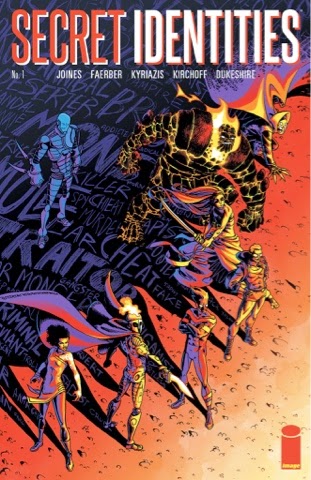 I’m very much a two superhero universes person. DC and Marvel are all I really need.
I try other takes every now and then, but so often it seems we’re simply getting more ‘extreme’, supposedly more realistic copies.

Image’s Secret Identities certainly has some of the archetypes – speedster, magician etc – but adds enough fresh touches of its own to grab my interest.

But I’m getting ahead of myself … 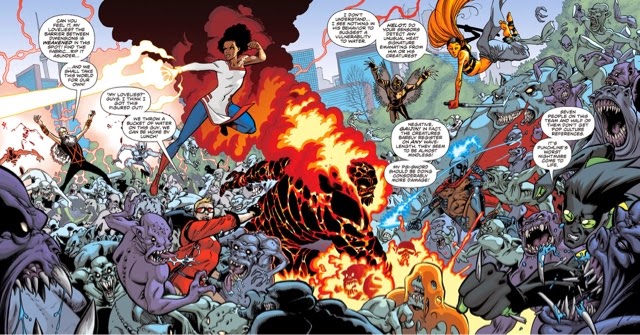 The extra-length debut begins with our heroes, The Front Line, taking on the villainous Perdition and his personal mob of monsters. Sheer numbers look set to overwhelm the Toronto-based team, but reinforcements are on the way – watching from a distance is non-member Crosswind.

He’s biding his time so his entrance has maximum impact. It’s the kind of thing early Booster Gold might have tried, so long as loss of life wasn’t in prospect, but the armour-suited Crosswind has a more sinister motive than headline grabbing. He wants to make such a big impression that the team offers him membership. Which they do, after he becomes the one to take Perdition down.

Seems awfully convenient, and it is – it turns out Crosswind doesn’t wish to join the Front Line because he admires them, but because he wishes to take them down. It was he and his unseen partner who arranged for Perdition to go on a rampage.

Too spoilery? Not at all – this is page nine of a 28pp story whose writers, Brian Joines and Jay Faerber, want us to know Crosswind has ill intent. As fans of the ‘Traitor Within the Legion Lad’ trope – whose most famous example was New Teen Titan Terra – they want to put readers in the head of the cuckoo from the minute he enters the nest.

Said nest is one of those original aspects I mentioned earlier – a giant, wrecked Sentinel-style robot operated by frog-like organisms. It’s pretty cack as hero HQs go, but has sentimental value for the team.

I like that after the incredibly crowded, inevitably confusing opening sequence, full of names and powers exposition, Secret Identities slows down to let us get to know the team members.

🔸There’s light blaster Luminary, whose dad has quite the impressive job.
🔸Rundown, whose private life is, shall we say, complicated.
🔸Bruiser Punchline, who wants to be a comic but can’t come up with a funny line to save her life. 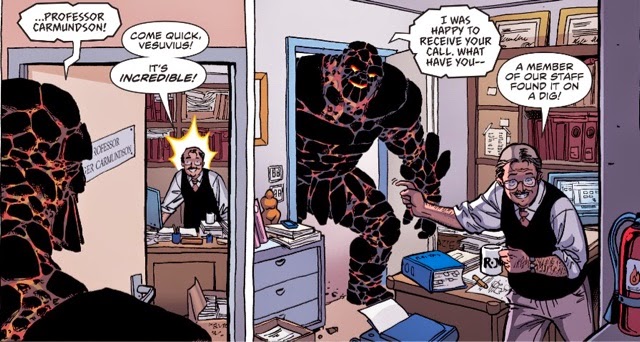 They’re a fascinating bunch, and I’m dying to see how Crosswind does in his bid to learn their every secret. So far, they’re being cautious, keeping their true names from him and not letting him too far into the robot’s innards, but sooner or later they’ll allow him further…

Joines and Faerber do a splendid job of sketching in personalities, dropping hints that stuff is going on behind the already intriguing things we’re seeing. I really appreciate that everyone gets a couple of pages to grab us, as opposed to the ‘one player per month’ approach used by the likes of J Michael Straczynski on his Squadron Supreme a few years back. The writers even manage to make the team’s geo-political standing interesting, with Canada and the US vying for their loyalty.

Ilias Kyriazis brings a classic approach to his pages, not trying to make things super-‘realistic’ or madly moody. His superhero house style linework ensures the shocking moments stand out all the more; the rest of the time, as coloured by Charlie Kirchoff, the work is just plain attractive.

Kyriazis’s storytelling is strong, and there are striking individual character designs – Recluse, for example, brings a whole new meaning to the term ‘domino mask’. The reveal of the robot is powerful, while there’s a true tenderness to the scene between Helot and ex-member Diamond Jim. 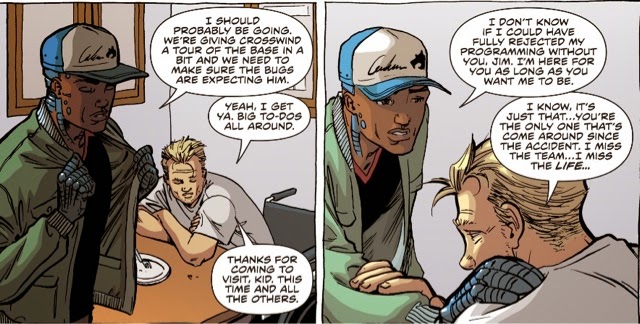 And the contrast between the smiley openness of Crosswind’s induction and the gloom of the next scene, set in a dark alley alive with carrion, says it all.
The lettering by Ed Dukeshire is strong too, friendly without being flippant.

I mentioned JMS’s Squadron Supreme, above, a story so decompressed and slow I can’t say with certainty that it was ever finished. What this book reminds me of, a tad, is the original Squadron Supreme maxi-series by Mark Gruenwald, Bob Hall and co, a hugely enjoyable take on Marvel’s JLA stand-ins. With that tone, and its own spice, Secret Identities succeeds in making a trip to a third superhero universe not just worthwhile, but compelling.