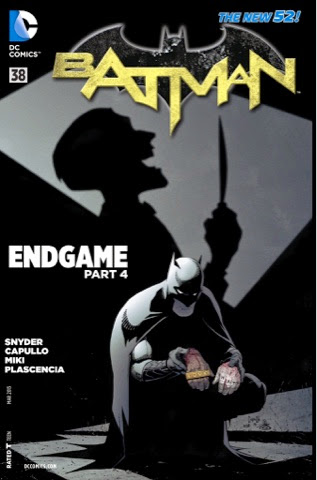 Batman isn’t quite at his wits’ end dealing with the latest attack on Gotham by the Joker, but for once he doesn’t have a plan. In Endgame’s fourth chapter, the Clown Prince of Crime’s madness virus is claiming more and more victims, and if a cure isn’t found, death is the end.
It seems death isn’t the end for the Joker, though, as evidence mounts that he’s not ‘simply’ a lunatic who’s extremely difficult to kill, he’s an immortal with regenerative powers. Jim Gordon may well be convinced, having shot the villain point blank, then wound up with an axe in his chest for his trouble. 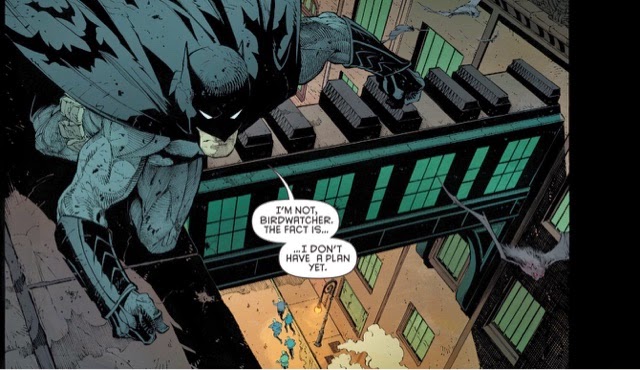 Batman does the deductive work even as he’s in a desperate fight against crazed Gotham citizens, engaging in a back and forth with Dick Grayson. He finally figures out who may have helped the Joker create the virus – diabolical as his nemesis is, he’s no mad scientist – tracks him down, and the news only gets worse. A desperate decision is made…
This is another packed issue of one of the few truly unmissable superhero series today.  Scott Snyder has succeeded where many a writer has failed; he’s given Batman his humanity back without surrendering the dark intensity many readers demand. Batman is Bruce Wayne is Batman and he is not as mad as his enemies. This isn’t the Bat-God of recent decades, it’s a hero who makes mistakes, who isn’t prepared for everything. Which is great for the readers, because ‘I-always-have-a-plan-Batman’ had gotten boringly predictable. Snyder’s Batman, though, can be surprised, which means the reader can be caught short by a page turn, which means more drama.
The drama this time features the return of a Golden Age villain, one I didn’t think anyone could make unsettling. But Snyder manages it, painting him as an eerily creepy zealot. Throughout the issue, Batman has descended deeper into an almost literal underworld, to meet a man who speaks of death and deities. Histories crumble, as new ones are offered.
I’d buy this comic for the scripts alone, but happily, Snyder’s artistic partner from the beginning of this run, Greg Capullo, remains and impresses me more by the month. His Batman is distinctive, expressive without being over-rendered, always believable in his environs. He’s a man on the edge, but a man in control, a tautly muscled hero ever ready for the unpredictable. Aide Julia Pennyworth and perhaps-future-Robin Duke look great too, as does the aforementioned Golden Age guy. As for the Joker, he’s just spooky as hell, particularly in a silent sequence. 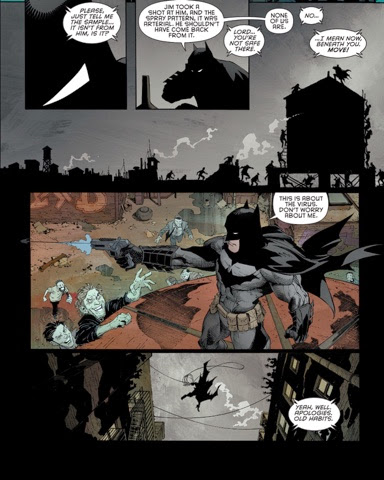 But it’s the depiction of the virus-maddened citizens in a fully realised city which really impresses. They leer at us as they teem towards Batman, like an insane, unstoppable termite colony, climbing through windows, overrunning buildings … nowhere is safe. Anonymous individuals who would otherwise be mere ‘background artistes’ are given weight in the story, meaning – they’re the souls Batman must save, they’re the souls who simply want him dead.
Adding their own talents are inker Danny Miki and colourist FCO Plascencia. The former embraces the darkness, giving extra weight and shape to Capullo’s pencils. As for Plascencia, I’d assumed that after the weirdness of Zero Year, which saw him use an uncharacteristic, for Batman, palette of hot colours, he’d turn to the more traditional blues, greys and browns. But nothing of the sort – the brights speak to the madness of the Joker, with an especially sickly green assigned to the citizenry.
Steve Wands and the equally excellent Jared K Fletcher share the lettering duties and I certainly can’t see the join, allowing me to enjoy the strip without a hiccup.
So, is the Joker immortal? Are Snyder, Capullo and co making a massive adjustment to the Batman canon? I don’t think so; they giving us a new Joker origin, but like every one we’ve previously been offered, it’s all hearsay and supposition. We’ve never been with the Joker at the moment of his birth, it’s always flashbacks, stories. And here we have another – one that’s very plausible in the DC Universe, where science and the supernatural sit side by side. But the story provides wiggle room… if we want to believe the Joker can literally come back from the dead, we can. But if we wish to continue accepting the comic book conceit that Batman’s greatest villain will always return, and the details aren’t important, that channel remains open.

Underlining the Joker’s status as a creature of pure story is the latest linked back-up written by James Tynion IV. A gaggle of Arkham Asylum patients have kidnapped a psychiatrist, to regale her with tales of the Joker, each very different from the last. Sam Kieth joins Tynion for a fable about an army of Batmen living under Gotham, explaining the Caped Crusader’s apparent ability to be everywhere at once. And guess who’s Batman No1? It’s a short, sharp treat thanks to a pithy script and beautifully expressive art, with softly applied colours by Ronda Pattison. Kieth and Pattison move from naturalistic to madness in a heartbeat – I hope DC finds a special project for this visual pairing. Trusty Travis Lanham lays down the letters with precision.
New additions to the Batman line – Gotham Academy, Grayson, Gotham By Midnight, Arkham Manor, the revamped Catwoman, Detective and Batgirl – have gotten a lot of attention and praise lately, and rightly so. The creative teams led by editor Mark Doyle are producing terrifically varied work, considering all are in the same family. But the mother book continues to set the standard which the sister titles, with their variety of subjects and tones, must strive to match. Snyder, Capullo and co are combining the classic with the contemporary to produce a shockingly good Batman run.