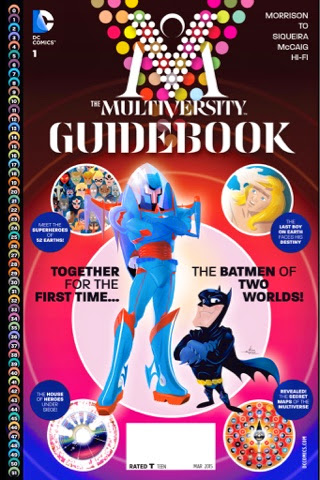 There’s a new crisis in the Multiverse, as the Gentry travels from world to world, killing superbeings and razing planets. A comic book has alerted mad scientist Dr Sivana to the fact of his other-dimensional counterparts, and he’s been gathering them in a bid for multiversal supremacy. Can the L’il League of Earth 42 stop them?

But last kid standing L’il Batman is going to have a darned good try, alongside a new arrival, the Batman of Earth 17. Helping them is a comic book tossed aside by a departing Sivana, The Multiversity: Guidebook … the very thing we’re reading. It tells them of a quest by Kamandi, the Last Boy on Earth, and as Kamandi learns, so, too, do they discover the origins of the DC Multiverse, the role of the Monitors and the relationships between worlds. They meet the heroes and villains who inhabit the 52 planets. And so do we. 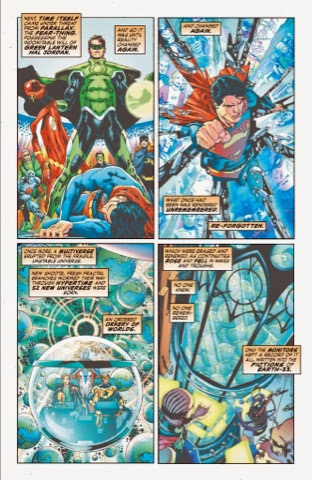 I won’t spoil too much of this massive comic – 72pp for $7.99 – but to give you a flavour, here are some of the things that made me smile: 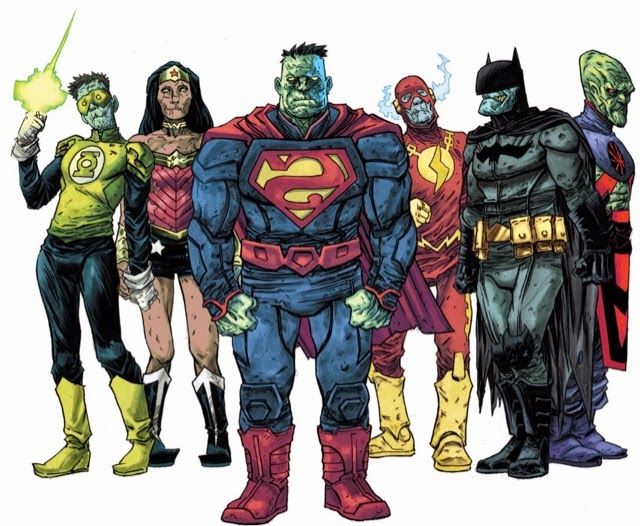 🔸The notion of Bizarro hero Adam Familiar – I hope Declan Shalvey, who provides this excellent Earth 29 entry, someday gets to illustrate his adventures on the planet Nnar.

🔸The Phantom Lady of Earth 10, a very different take on the scantily clad minx ‘demanded’ by tradition.
🔸Earth 38, home to the heroes of John Byrne’s two Generations mini-series, an utter treat for fans who grew up with the Silver and Bronze Age Superman and Batman.
🔸Happy Da Vinci, hero outfitter of Earth 39’s Heroes of W.O.N.D.E.R. 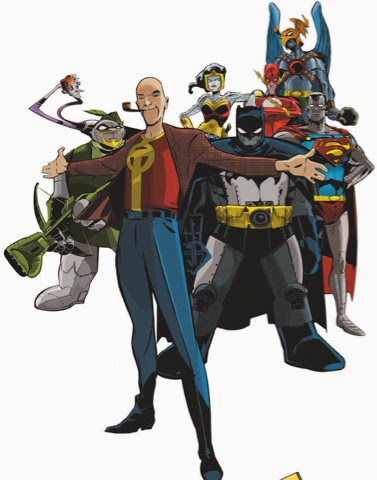 🔸Dr Will Tornado and his Metal League of Earth 44.
🔸The very notion of ‘the local multiverse’.

And, as the phrase goes, much, much more – writer Grant Morrison is a perpetual motion ideas machine, inventing new concepts, revamping earlier ones, unravelling and expanding the tapestry of the DC Multiverse. Several times over the years we’ve seen editorial regimes decide their comics cloth is too large, perhaps unwieldy, and hack it back.

‘The JSA members are too old, the kids won’t relate, kill/banish them!’
‘Parallel worlds are too tough to understand, merge them!’
‘There’s just too much continuity, wipe the slate clean-ish’

And every time, after a few years, they – or a new set of hands – realise what has been lost: the JSA returns; the Multiverse is found to persist; the old continuities survive in these worlds. Currently, we’re in a rebuilding phase, with Morrison using his grand adventure to classify and clarify what the 52 worlds of DC’s post-2011 Multiverse are. Or at least, what the 52 – that’s Earths 0-51 – we’re being told about are. I’ve no doubt that one day we’ll learn that the Earths are infinite once again. 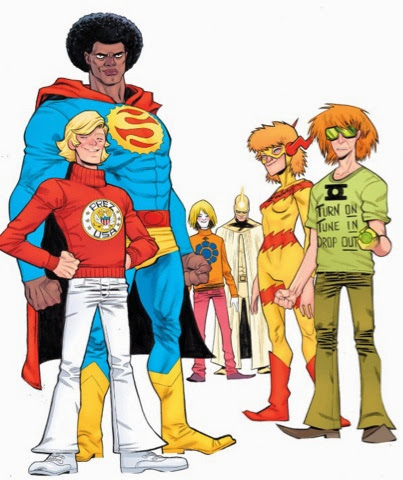 As a fan of the various DC Who’s Who series (currently being discussed on the endlessly entertaining Who’s Who: The Definitive Podcast of the DC Universe show), and the many encyclopaedias released down the years, I love handbook pages, and the ones sandwiched between the framing sequences here don’t disappoint. A battery of excellent artists, from veterans Brian Hitch, Chris Sprouse, Nicola Scott, Darwyn Cooke and Gene Ha, to newer talents such as Emanuela Lupacchino, Jake Wyatt and Scott Hepburn – who draws the delightful entry for psychedelic Earth 47, above, colours by Nathan Fairbairn – produce page after fascinating page of insights into worlds old and new. ‘Too many to mention’ is a phrase which can also be applied to the coterie of colourists here, but I will laud the one man who letters every page, Todd Klein – he deserves a special nod for emphases that make the dialogue in the Kamandi sequence appropriately Jack Kirby-esque. And editor Rickey Purdin has done a hugely commendable job of coordinating and realising this project. 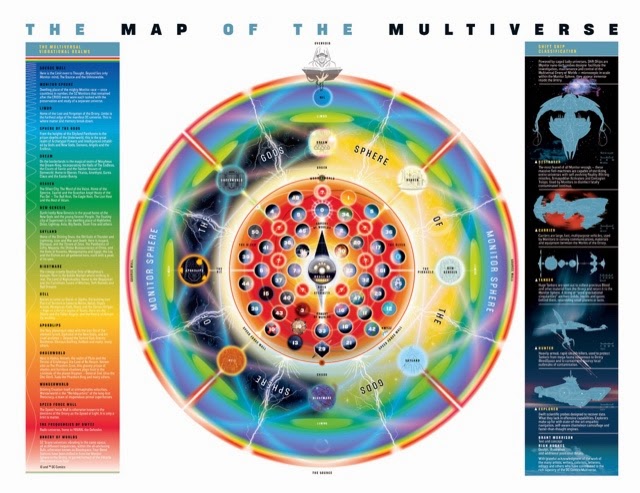 At the heart of the book is the much-trailed Map of the Multiverse infographic by Grant and this special’s designer and cover artist, Rian Hughes, laying out the spatial relationships between such realms, worlds and concepts as Heaven, Apokolips, Dream and the Speed Force. I don’t know how relevant all of this will be to the conclusion of the Multiversity project, but it’s wonderfully mind-bending in and of itself. We also get a look at the various crafts used to traverse the Multiverse – one for Top Trumps fans, I guess.

As for the strip sandwiching the glorious infodumps, the team-up between Atomic Knights Batman and L’il Gotham Batman is classic DC in that it shows how two incredibly different characters can work together simply because it’s the right thing to do – the situation is tense enough without them arguing over who the ‘real’ Batman is. Marcus To does a wonderful job of drawing the sequence, somehow ensuring that neither character looks incongruous next to the other. And his squadron of Sivanas is, almost certainly, to die for. 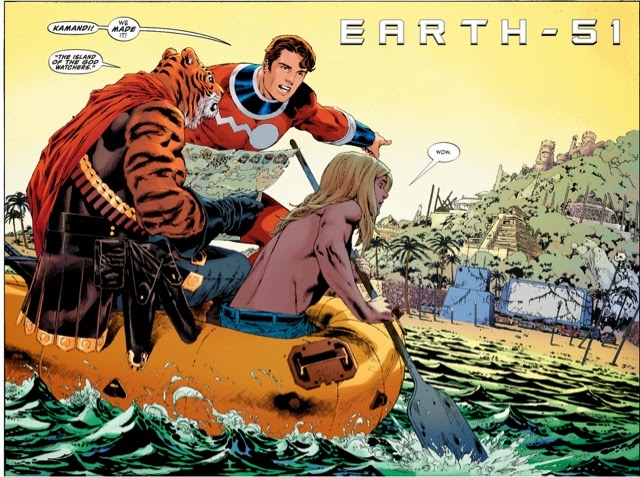 As for the Kamandi vignette, that’s the work of Paulo Siqueira and it’s just gorgeous – if there’s a Kirby project in the works at DC, someone give this man a shot.

Throughout the Guidebook, Morrison sprinkles meta-fictional mysteries – what is the nature of the seven Unknown Worlds? The ‘great and terrible secret’ of Earth 42? And ‘the rose that grows in winter’? For whom is Kamandi searching? Why are our eyes directed to a Rubik’s Cube, is it something to do with the cube-like Bizarro World? 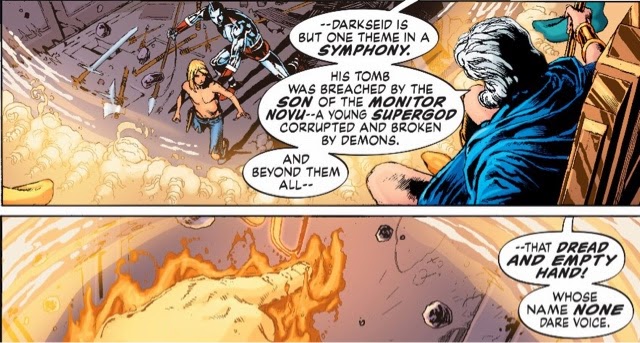 The biggest question, for me, is: what is the ‘dread and empty hand’? Does it belong to us, the reader, always waiting for the next comic, demanding another continuity makeover? Floating cosmic hands have been a DC meme for decades, from the hand viewed by Krona linked to the original Crisis on Infinite Earths, to JLA #100’s ‘cosmic claw’. Look closely here, and you’ll spot a directional hand popping out of a narrative box, as popularised by Silver Age Flash co-creator Carmine Infantino. That can’t be accidental. 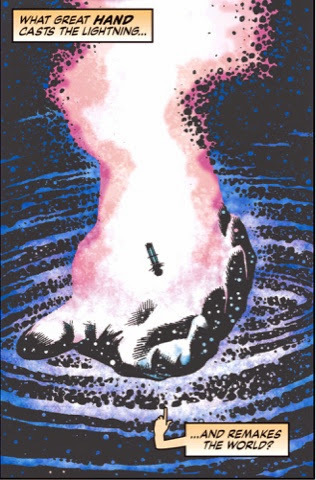 Given Morrison notes that the Flash is always at the centre of multiversal resets, I’m hoping he isn’t planning on making the ultimate god of DC comics Mopee, the self-proclaimed ‘Heavenly helpmate’ who once claimed to be behind the lightning bolt that struck Barry Allen. If you’ve never come across this little irritant, look him up and then be grateful.

I really wouldn’t put it past the trickster Morrison, but with luck he’s merely teasing.

Hopefully, he’s also only playing with us as slasher movie-style Dr Sivana – I call him Dr Saw-vana – hints that he wants to do something terrible to Ms Marvel, also his position in the superb Multiversity: Thunderworld issue; that character has been abused enough down the years.

We’ll find out soon, as the project continues with a Freedom Fighters one-off, giving us a better look at this new Phantom Lady. Before that, I’m going to read this comic a few more times, see what other clues can be gleaned. Knowing Morrison, though, I’ll turn out to be the villain.

17 thoughts on “The Multiversity: Guidebook #1 review”