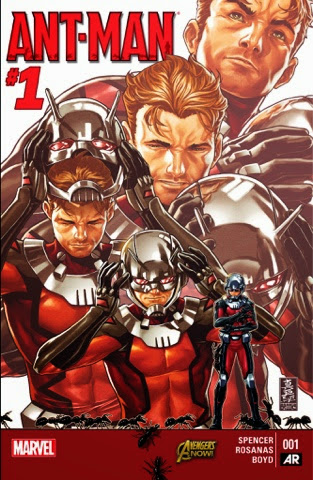 I’m Wally West. I’m the Flash… It worked 20 years ago and it works today, the first person superhero comic narration. And given that Wally West isn’t around right now – well, not the real guy – I’m happy to see Scott Lang aka Ant-Man borrow the schtick. Especially when it’s Scott Lang as written by a writer as sharp as Nick Spencer. 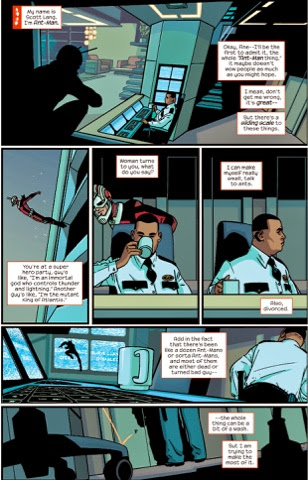 Take this first page, for example. In just six panels we get the start of an adventure, a bit of backstory and most importantly, a sense of Scott’s character. And that’s how the issue continues, with soufflé-light narration and dialogue that, little by little, shows you the depths of the man.

The action has Scott trying out for a security job with Tony Stark. He’s a little down on his luck and wants a regular gig so he can be a better dad to daughter Cassie, and perhaps even get ex-wife Peggy off his back. Also vying for the position are minor league heroes Prodigy and Victor Mancha, and ‘reformed’ supervillain the (female) Beetle. As an ex-con himself, Scott can’t really go judging her, but she does pull a rather naughty stunt.

And so does Scott, aided by thousands upon thousands of extremely accommodating ants. The way things pan out is a tad predictable, yet entirely satisfactory – it makes total sense for the personalities involved.

Along the way, Spencer shows Scott using his shrinking powers in a way that’s new to me, which I like – when you have legacy heroes it’s good when they put their own signature to the job (see Wally West again). 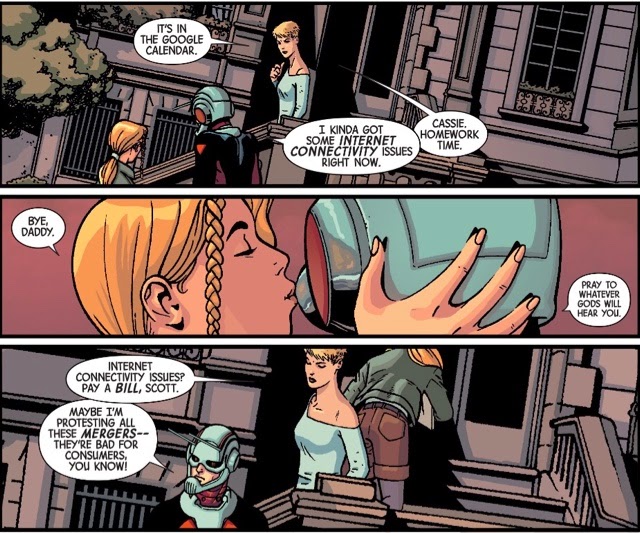 Spencer references Cassie’s, shall we say, complicated last few years in a way that works for the story, without dumping a load of baggage on newer readers >cough Young Avengers, Doctor Doom, dead<. So we see the relationship between father and daughter, mother and daughter, ex-wife and ex-husband. Crucially, Spencer doesn't present Peggy as the bad guy; her points are entirely fair – she simply wants Cassie to be safe, and to get through school. Scott thinks he can keep her safe in New York City, but as Peggy points out, Marvel's NYC isn't secure at the best of times. Even the newest reader can appreciate this, without Spencer having to spell out that Cassie – and indeed Scott – is among the recently dead.

Similarly, Spencer’s Iron Man straddles the line between the current Superior Iron Man of the comics, who’s had his personality flipped towards the bad side, and Robert Downey’s film version. Whichever Stark is on your mind, that’s who you’ll see. Easter egg-wise, readers who suffered through Nineties Marvel will smile at the Stark security password.

The shrinking powers are used well here, but they’re not the point. Scott Lang comes across as such a vibrant personality that this book would work whether he had different powers, or none … he’s a pretty regular guy trying to get by in the maddest of worlds, and if a little denial helps him through the day, whyever not?

Ramon Rosanas has an understated illustrative style that suits Spencer’s script down to the ant-covered ground. His Ant-Man, in a stylish new take on the classic Hank Pym costume, is impressive without being godly, and he has a facility with expressions that sells the script. The new helmet obscures the eyes, but there’s never a problem reading Scott’s face. There’s so much going on in this extra-sized first issue that some pages are filled with titchy panels, but the art remains balanced and the pages never feel crowded. There’s a fluidity to the storytelling, grace in the way Scott moves and confidence in every line. 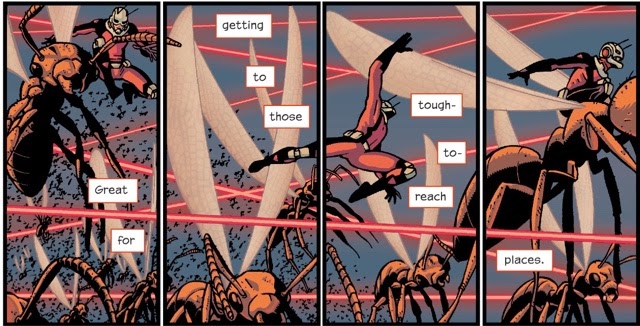 I like Rosanas’ Tony Stark, too, his body language evoking Downey as much as does Spencer’s speech.

The finishing touches are provided by colourist Jordan Boyd, who keeps things real without descending to the drab. And Travis Lanham, in the first Marvel work I’ve seen from him, keeps the sound turned up nicely with his lettering.

Tips of the hat, too, to editors Jon Moisan and Wil Moss, and designer Idette Winecoor, without whom etc etc.

Mark Brooks is a hugely talented artist, but I don’t think his cover image works – I like the individual elements, especially the ants climbing across the furniture, but there’s no sense of movement – of shrinking.

Still, if I were wont to give stars (that’s how you get in the review round-ups, kids), this debut issue would be a surefive five-star special. With all the creators on top form, it’s gloriously entertaining from start to finish and accessible for anyone intrigued by the coming movie. I can’t wait to see what the future holds. At one point Scott self-deprecatingly references the old ‘Astonishing Ant-Man tag’ but if his series is as good as this first issue, in his own small way, he’s there.