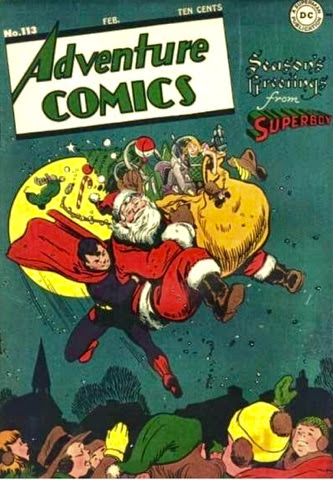 I do love a great Christmas comics story, dripping with joy and sentiment, perhaps a bittersweet moment or two. You know the sort of thing – the ghost of Supergirl helps a downbeat Deadman put heroism into perspective. Superman dips into his mailbag before carrying out festive good deeds. The Legion of Super-Heroes travel back in time to find the star that appeared over Bethlehem as Jesus was born.

One of the sadnesses of modern comics is that they’re so wrapped up in telling supposedly epic stories, strewn over multiple titles for seeming aeons, that come December there’s no room for a little one-off seasonal tale. 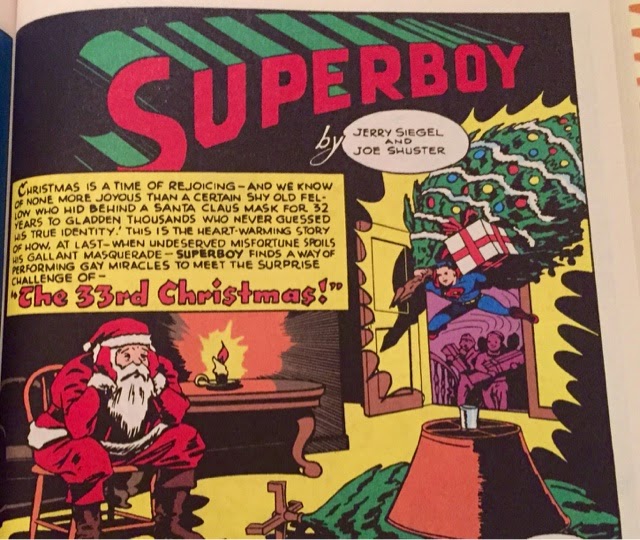 But back in 1946, things were different. Adventure Comics #113, cover dated February 1947 but on sale the previous December, featured Superboy in ‘The 33rd Christmas’.

The story, unusually, spans more than a year as it tells us the tale of Nick Brown, Smallville school janitor, who has a secret. Every Christmas Eve for 32 years he’s been the unknown Santa who shows up to give the kids gifts. The students, Clark Kent among them, assume he’s a kindly rich fellow. 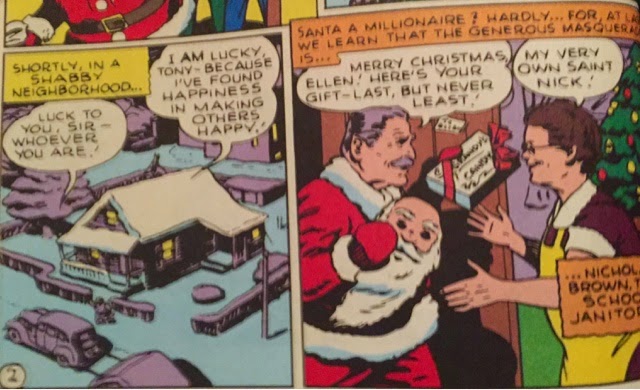 But no, Nick and his wife Ellen spend the entire year making gifts for the children of Superboy’s hometown. And things would likely carry on this way for the childless couple until the day disaster strikes. The stove under the glue pot in the Browns’ basement catches alight, setting fire to their modest home.

The property is saved by Superboy but Ellen has been struck down by some nameless injuries. The young hero flies her cross country for specialist treatment, which Nick pays for with money he’s saved towards toy materials. By the time the next Christmas approaches, Nick is feeling pretty down.

Superboy, who’s been keeping an eye on him, sees his efforts to get a donation from the wealthy Mr Rudge come to naught – think Potter in It’s A Wonderful Life, released around the same time as this issue. So the kids won’t get their toys, but more importantly, something that means so much to a kind old gentleman will be lost. 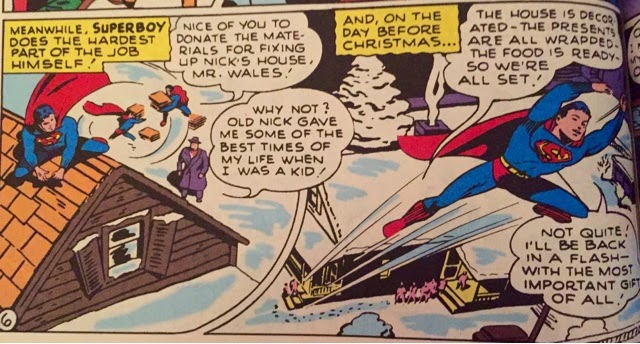 The Boy of Steel isn’t going to let that happen. He organises the local children and their parents to give Nick the kind of joy he’s handed out to generations. And Superboy’s contribution is ensuring the return of the recovered Ellen, reuniting her with Nick. The secret of the mystery Santa has been lost, but so much has been regained. 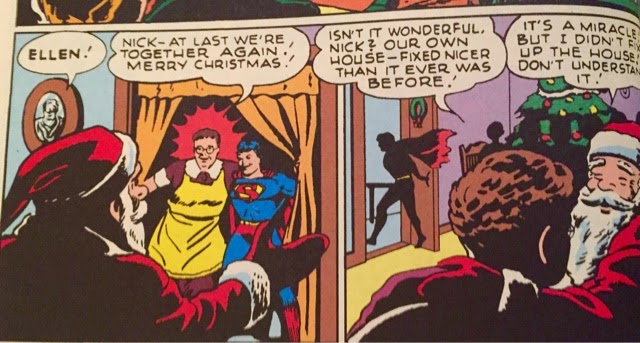 I admit, this story gave me a lump in my throat. There’s no big threat, no villain, just good people, looking out for one another. Rich Mr Rudge isn’t evil, simply selfish and lacking in the Christmas spirit, there to provide motivation and contrast. This is the type of story I wish we saw more of today.

‘The 33rd Christmas’ is written by Don Cameron, his script sentimental enough to provide the required reaction without being saccharine. The art by penciller John Sikela – one of my Golden Age favourites – and inker Stan Kaye is deceptively simple in its expressiveness. Reading it in 2014, it’s easy to imagine how youngsters of the immediate postwar years might have reacted to it, seeing themselves in Clark Kent’s classmates, feeling for the kindly old couple who give so much.

The story isn’t available digitally, only in DC’s hardback collection The Adventures of Superboy, hence my appalling scans. If you don’t own it, definitely put this collection on your Christmas list next year.