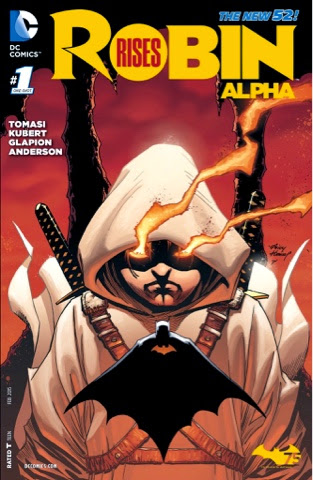 Well, that was … more of the same. For the last couple of months the Batman and Robin series has featured Batman and friends vs Darkseid and the forces of Apokolips. B&R #37 saw Batman succeed in returning to Earth and returning dead son Damian to life. This issue bookending the Robin Rises story begins not so much with a recap as a repeat – most of the first dozen pages see Andy Kubert and Jonathan Glapion redraw what Patrick Gleason and Mick Gray already presented in B&R #37.

Given that pretty much everyone buying this $4.99 special will have been following the serial, the repeated narrative comes across as a waste of space, padding to help fill the 40 story pages available. Sure, it looks good as re-presented by Kubert, inker Glapion and colourist Brad Anderson, but I’d rather they were drawing something fresh. Then there’s what’s filling the rest of the book, a fight with Darkseid’s son Kalibak, who hops through a stuck-open Boom Tube into the Batcave. It’s big, noisy fun, but pretty much what we’ve had over the last few months. 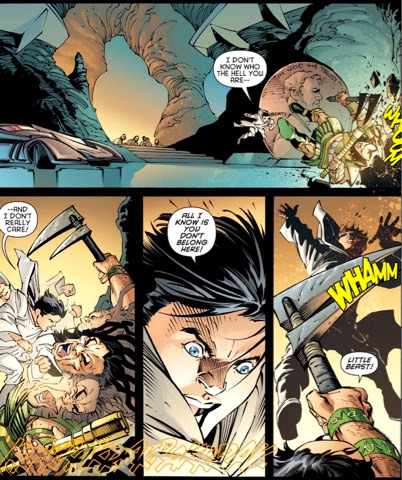 The only real moment of interest is Damian exhibiting super-powers, and that’s been trailed to bits by DC. That leaves the only real points of novelty being the key players in the defeat of the Apokolips prince, the post-fight visit to Damian’s destroyed grave and the inevitable return of Talia Al-Ghul. It’s not enough to make this issue a must-buy – Peter J Tomasi’s script is confident and pacey, the aforementioned art fluid and dynamic, but overall, this book feels a bit flat. Having been told months ago that Damian was coming back from the dead, I expected that by the time we got to this offering it’d be aftermath all the way. This is a pretty decent sci-fi Batman comic, but if you’re short of cash after the Christmas shopping, it’s eminently skip-able. I really am going to have to start flicking through comics before buying these things…

So, Robin has risen, he has super powers and Mommy’s going to be showing up. I’ll keep following the story over in B&R, if for no other reason than the always great Alfred/Damian interaction, but please DC, no more un-special ‘specials’.