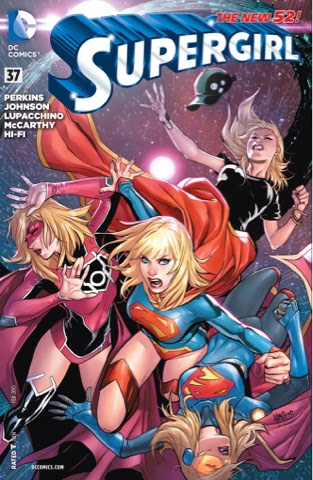 Kara Zor-El is settling into the Crucible, training academy for the best and brightest young super-beings in the galaxy. She’s getting to know her study group members, Tsavo, Maxima and Comet, and learning that classes may be about more than they seem. 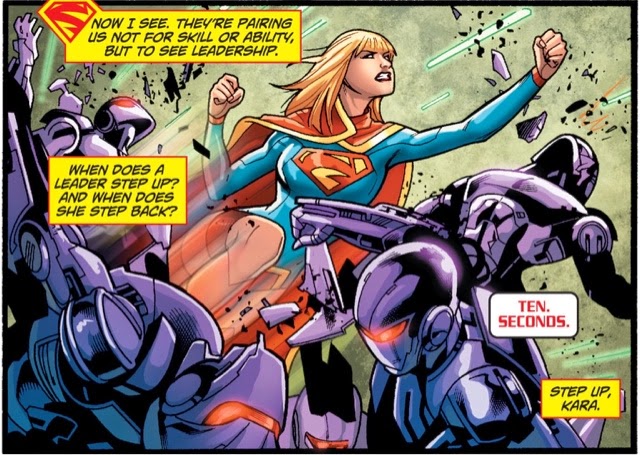 Away from the lecture theatres, school heads Preceptor Amata and Korstus meet with the academy’s high council and we learn more about what the institution is about. And someone has plans for the clone Superboy…

The Crucible storyline kicks into high gear here, as writers Mike Johnson and K Perkins give us a better look at Kara’s fellow students – Kara’s opening spread first impressions are speedily contradicted – while giving us the bigger picture. Maxima is torn between her own desires and responsibility to her home planet. Tsavo seems like a hot-headed bad kitty but he’s desperate to bring peace to his homeworld of Ngo, riven by civil war. And Comet … OK, we don’t find out what makes him tick, he’s a raging narcissist, though not necessarily a bad guy.

The writers are nailing it, so far as character motivation goes, with the teachers as multi-dimensional as the students. In one scene here, Amata seems to be the bitch towards Korstus, then we learn that Korstus wants to use the students in ways they never expected, then we see that he has good intentions, but …

… who’s right and who’s wrong? I never expected such interesting questions; I thought this would be Heathers in space. It’s wonderful to see writers find ways to bring in conflict without falling back on cliche. 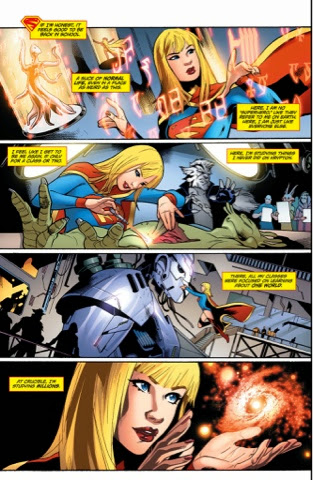 And it’s great to see that while she has an ensemble cast, Kara remains the star of her book. We’re seeing Crucible through her eyes, getting more insight into her character through it, watching her develop as a person, as a heroine. The writers seem to have been inspired by the Red Lanterns storyline in their approach, though I don’t doubt they’ll veer off into directions of their own.

While we don’t visit Earth this month, Kara’s life there isn’t forgotten, with potential boyfriend Mike getting a mention. I really want to know what’s up with Silver Banshee Siobhan and the demon Blaze, hopefully we’ll find out soon.

Emanuela Lupacchino matches the quality of the script with her thoughtful, dynamic compositions. She’s obviously having fun with the designs, taking the opportunity offered by a cosmic locale filled with extraterrestrials to go a little wild. There’s a pleasing variety of aliens on display, with this guy being my favourite. 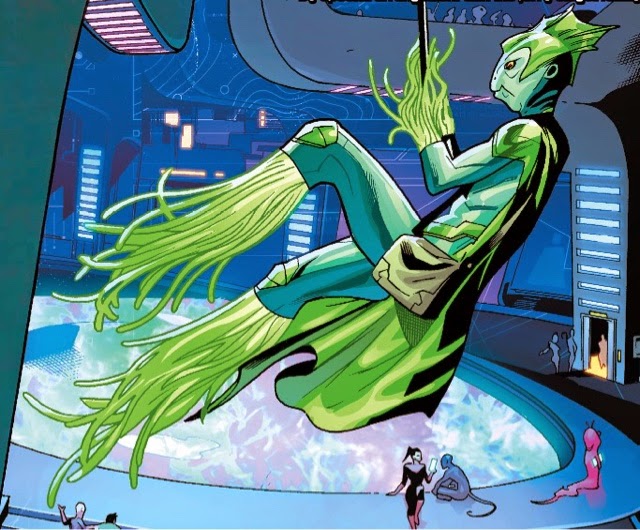 Lupacchino never loses sight of the storytelling, though, paying particular attention to characters’ emotions, such as in a scene that has Maxima challenging Korstus’ history lesson. And while the script is wordier than most previous ones – something I like, I call it good value, see also Batgirl – the pages are never cluttered. Inker Ray McCarthy adds extra definition and flourishes, Hi-Fi colours with verve, Rob Leigh letters with dash … this creative team is gelling nicely.

With a striking cover by Lupacchino and colourist Tomeu Morey (how I love Coffee Shop Kara) and a cliffhanger that teases one thing, then delivers another – phew – Supergirl #37 is another entertaining issue of a series that seems to be finding its feet.