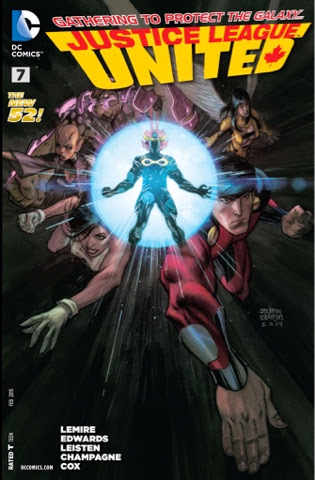 We’re halfway through the five-part Infinitus Saga, teaming Justice League United with the Legion of Super-Heroes. After an initial sortie, interstellar baddie Byth and his Cadre henchmen escape with the child Ultra, whose cosmic destiny is, it seems, to become a being named Infinitus and destroy the 31st century. Oops. Byth’s plan involves seeding a space rift with Ultra, transforming the alien hybrid into Infinitus.
Or something.
It’s all to do with Byth’s personal beliefs, death cult stuff. The details have likely all been spelt out but I’m enjoying the ride so much that I’m OK with a few of them eluding my grasp. Because writer Jeff Lemire is giving us the best darn pure superhero comic of the DC line, a wild ride that I don’t want to end. Sure, we’ve had the opening drama gambit of the Legion wanting to kill Ultra, as the only way to save the future, but this issue Stargirl cuts through the moral morass with simple idealism. 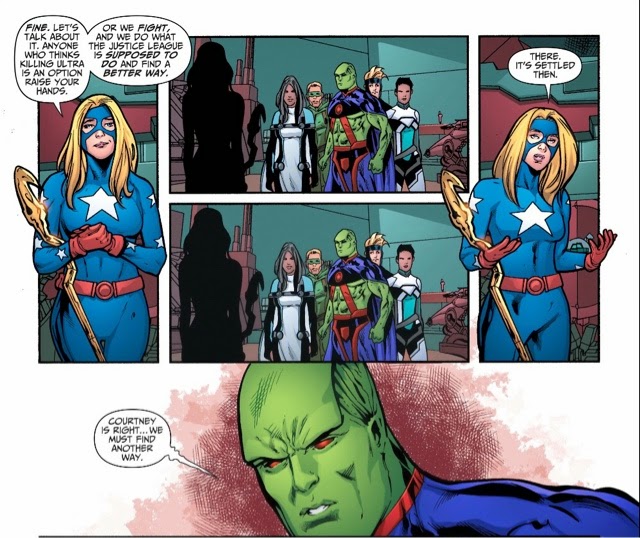 Everyone falls behind her – if Ultra is going to be killed you can bet it’ll be the last resort. The teams use brains and brawn as they attempt to save the future, fighting Byth’s plan on three fronts. While focused on the task, there’s plenty of room for the teams to interact – to the JLU, the LSH are strange visitors from a reality that’s hard to conceive; to the LSH, the JLU are their inspiration. This gives us some fine character snippets, alongside the humour that has become one of this series’ trademarks. 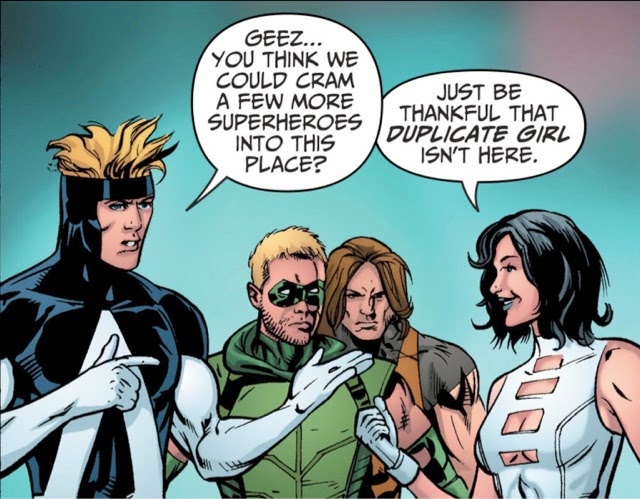 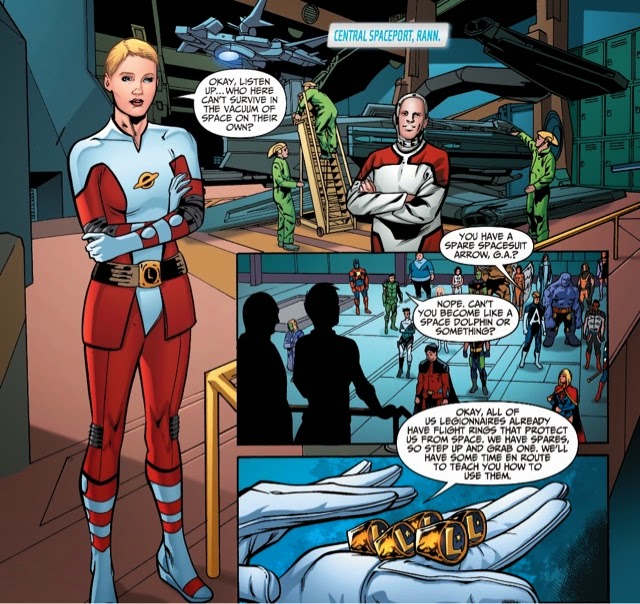 Best of all, I have my Legion back – big and shiny and noble, and looking great as pencilled by Neil Edwards, inked by Jay Leisten and Keith Champagne, and coloured by Jeromy Cox. I might knock a point off for Lemire having sonic screamer Tyroc speak while using his power, though as he’s been doing that since the Seventies, maybe it’s part of his skill set. Basically, this is the Legion as I want them – a massive group blending abilities and personalities to fight for what’s right. Big and shiny and darn impressive. Edwards is knocking himself out with some wild layouts, packed to the gills with powerful, pretty people – and that includes Tellus, the sexy old fish fella – in eye-popping action. There’s no skimping on the detail – faces are individual, action makes sense from panel to panel, backgrounds are present and impressive … DC should be promoting the heck out of Edwards.
And while the excellent Andrew Robinson gifts the Legion the cover slot, they don’t take over the book – the JLU are front and centre, sharing the action.
So, two more months and then, what? With luck the Legion will get a series following DC’s Convergence event, with Lemire and Edwards at the helm. If anyone has shown they deserve a chance to make the Legion of Super-Heroes great again, they have.