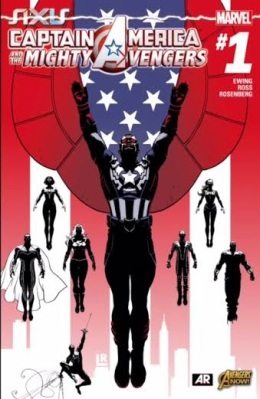 There’s a new Captain America in town. The Falcon has assumed the role and while Steve Rogers grapples with unexpected old age, Sam Wilson grapples with his shield, working out the best way to use it against New York’s criminals.

What he isn’t grappling with is his morality; he’s sure that treating the bad guys badly is justified. If someone gets crippled along the way, well, they’ll think twice before acting against society again.

At the Gem Theatre, the Mighty Avengers are transforming themselves into a regular Hero Hotline, ready to battle supervillains but just as ready to help someone change a tyre or fill in a job application. What leader Luke Cage isn’t ready to do is forgive Spider-Man, when he comes to apologise for the things ‘he’ did when Doctor Octopus was in control. Luke’s perspective is that, evicted from his own body or not, Spidey let Ock in, allowing him to threaten Luke’s baby daughter Danielle. 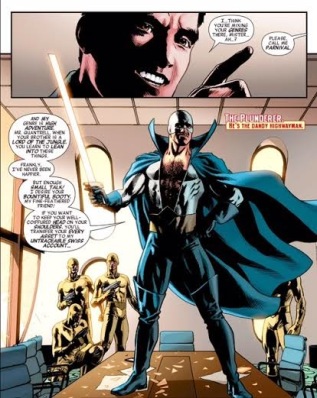 Flamboyant not-especially-super-villain The Plunderer turns up at the offices of shady businessman Jason Quantrell just as he’s trying to persuade his board that bedding down with bad guys is good for business. The Plunderer isn’t in Quantrell’s Rolodex, but he is in his face, determined to steal lots of money – to help orphans. Thing is, though, he’s been spotted by a pigeon, which brings master of birds FalCap running, sorry, flying in through the window. He kicks the crap out Plunderer’s henchmen, gives their leader a good, hard slap, and leaves, advising Quantrell not to bother getting them medical help.

The only help Quantrell plans to get, though, is from Luke Cage – has the former Power Man been tempted by big bucks when he’s supposedly committed to helping the little guy?

And at Avengers Tower, we learn that FalCap has a vision for the Mighty Avengers.

Well, there has to be some in-story reason for him to get top billing in this relaunch. In our world, this second volume of Al Ewing’s entertainingly excellent, sadly overlooked Mighty Avengers is getting a new name and first issue to tie in with the publicity around Sam’s ‘promotion’ – quote marks because I’d rather the Falcon be his own good self than the latest in a long line of faux Caps.

Still, if the move sees Mighty Avengers get an upward sales blip, I’m all for it. Certainly the tie-in to the Avengers/X-Men Axis series, with the lines between some of the good and bad guys suddenly iffy, generates an interesting new direction that might grab some new punters. I’d love more people to try this book and see what an Avengers series can be – a tremendous blend of individuated players, imaginative action and continuity that enhances rather than strangles. If the last run is the exemplar, there’ll be no 200-part stories kicking off, rather, it’ll be individually satisfying one, two and three-parters that build to a very satisfying whole. 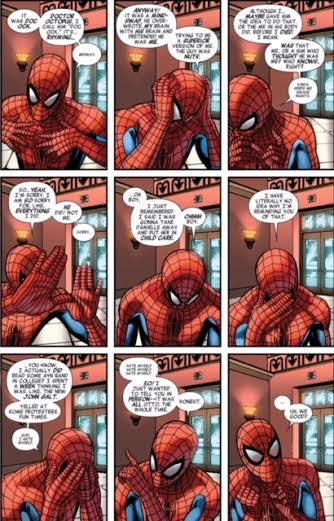 Every bit as good as Ewing’s character work is his plotting, with events beautifully paced. The page with Spidey begging Luke for forgiveness, for example, is a classic Peter Parker moment, all the more treasurable for being outside his own series.

That sequence is also a fine showcase for new regular artist Luke Ross, who makes every page look mighty good. It’s funny that while FalCap (is that irritating yet? I expect so, sorry) is the purported star, the Plunderer steals the show and that’s down to Ross’s art as much as Ewing’s bonhomie-filled dialogue. Heck, the Plunderer actually looks sexy! Maybe after the Axis business is done he’ll join the side of the angels properly and sign up with the Mighty Avengers – at the very least, Luke’s movie theatre-owning pal DW Griffith will appreciate the swashbuckling.

Every page is impressive, as Ross give us a great-looking Big Apple populated by real-seeming people. His compositions make FalCap’s flying scenes soar, while the more down to earth angles ground the quieter moments nicely. He even populates the Gem Theatre with film posters. I can’t wait to see how he draws the Avengers not properly seen this time – White Tiger, Power Man, She Hulk, Kaluu, Blue Marvel and Spectrum. Superbly, I expect.

‘Superb’ is also the word to describe the colour art of Rachelle Rosenberg, who models people as well as anyone I’ve seen. She blends tones with real intelligence and style throughout, and I hope she’s signed to this series.

Ross looks to have coloured his own cover art and it is, to say the least, a strong design, well executed. More please. But less of that logo, which is a monumental stinker, the big ‘A’ splitting viewer focus and inviting us to read the words in the wrong order.

There’s a new character in this issue (either that, or my memory of her has vanished with the Reality Reboot of the Week), Soraya Khorasani. I’m thinking she’s a neighbourhood woman rather than a hero-in-waiting, but either way I’m thrilled by the diversity she represents… 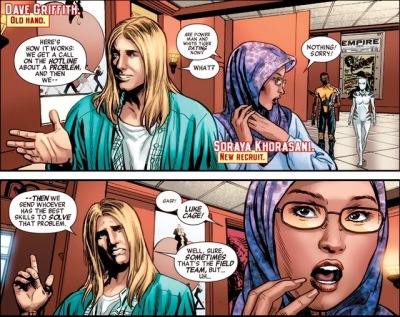 … she’s wearing glasses! When was the last time an Avenger actually needed specs for vision correction? Never. So keep her around, Ewing.

If you like solid superheroics with 21st-century bite, try this book. You won’t regret it.

3 thoughts on “Captain America and the Mighty Avengers #1 review”