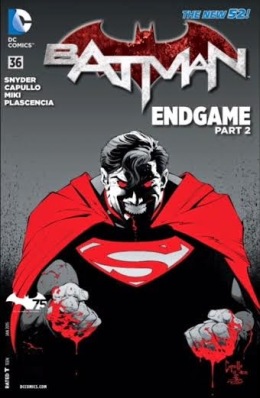 The Justice League members have been Jokerised. Ingenuity and gadgets have seen Batman take out Wonder Woman, the Flash and Aquaman, and there’s a plan in place for Cyborg, but Superman, he’s another matter. As this second part of Scott Snyder and Greg Capullo’s Endgame story opens, Batman is fighting for his life. Under the thrall of the Joker, Superman’s self-imposed limits are turned off – he could easily kill his best friend.

But Batman has a thing or two tucked up his utility belt. I won’t spoil the surprises, but it’s safe to say that both main weapons play into DC continuity – and one of them is fun. I’m not sure of the wisdom of announcing what he has, and how it works, but this Superman is more than a tad addled of head, so perhaps Batman is trying to get him in closer for his closing gambit.

And it’s a good thing Batman evacuated this area of the city last issue, otherwise … oops. 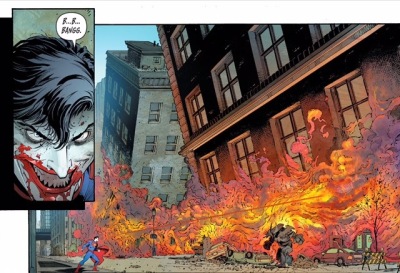 With the Leaguers recovering in hospital, it’s up to Batman and aides Alfred and Julia Pennyworth to work out how the Joker got to the League, and what his next move might be. Soon, Batman is treading the corridors of the recently ruined Arkham Asylum, where he meets a man who only wants to help …

Snyder and Capullo really are cooking with Joker gas here, delivering a big, daft, wonderful Batman vs Superman scene, followed by a warm, family war council and closing with a creepy bit of business that ratchets things up several notches. They reconcile the haunted Batman of their run with the balls-busting Bat God of the Justice League, making it apparent they really are the same guy. And they continue to show that a Batman who is as much man as bat – in the internal narration it’s always ‘Bruce’ – is far more interesting than a perpetual motion Batman machine. 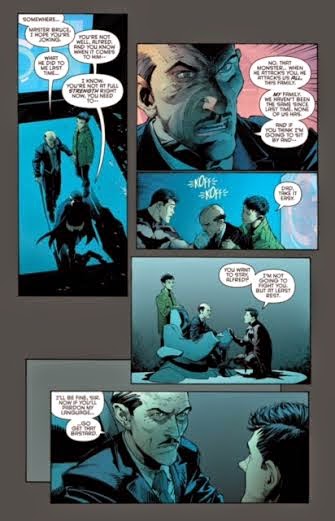 Plus, Best. Alfred. Ever. And if Julia doesn’t continue hanging around the cave, I’ll be sorely disappointed – she’s capable, questioning and is that rare thing, a woman in Gotham who manages not to desire Bruce without (ahem) batting for the other side.

The art, as ever, is gorgeous. Capullo’s storytelling is exemplary, always complementing the script rather than repeating it. His compositions simply work, and whether he’s going in for close-ups, or showing us something from a distance, the craft is the same; there’s no skimping. Danny Miki sharpens and focuses the linework, while whether it’s dark or daytime, FCO Plascencia dazzles with his box of colours – shadowed shapes for a scary Superman, murky greens for an underwater scene, reds for an especially intense exchange and natural tones when Superman takes Batman up, up in the sky. I know some people loved the monochrome Batman tales of the early 2000s, but I prefer a changing palette to echo the story beats. There’s art, too, in the fontwork of Steve Wands, one of the finest letterers around – giving the best example, though, would mean spoiling something, so I shall pass.

As well as the 22-page Endgame chapter, this issue features an 8pp supplementary strip in which an escaped Arkham patient tells her story. Housewife Cordelia had it all, until the day she realised something was wrong with her perfect husband. Onetime Batman penciller Graham Nolan declares himself well and truly back from the wilds of newspaper stripping with a stylish, intelligent piece that mines all the drama in James Tynion IV’s cracking script. 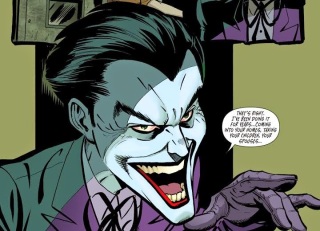 The Joker – or rather, a Joker – appears and it’s one of the best depictions I’ve seen this side of the New 52, honouring the great Dick Sprang and splendidly in context. There’s nice work, too, from colour man Gregory Wright and letterer Taylor Esposito.

Superman is frightening and formidable on the cover by Capullo, Miki and Plascencia. Take away the blood – which is gross and unnecessary, and a modern cliche where the Superman Family is concerned – and it’d be perfect.

DC had planned to charge $4.99 for this issue, and the series going forward; Snyder persuaded the bigwigs to keep the book at its regular dollar-lighter price point. And for my money, that makes this issue of absorbing Gotham drama the bargain on the week.