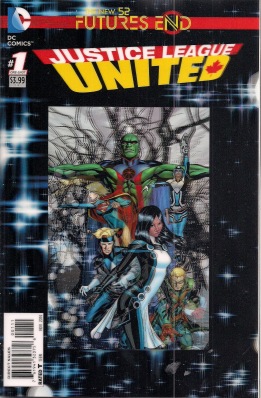 In the recently debuted Justice League United series, Miiyahbin Marten has just discovered her super-powers and hasn’t yet adopted a superhero identity. Five years in the future she’s Equinox, Canada’s greatest hero. And she has a great new villain: 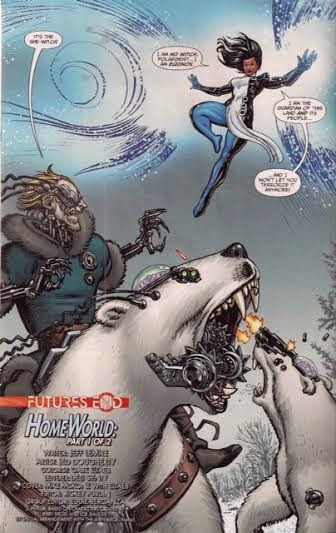 ‘Great’ as in fun, not impressive. It’s the Polargeist, making a polar heist! Equinox makes short work of him, but never-ending-battles being what they are, she immediately receives a plea for help from J’onn J’onzz. Will her old teammates in Justice League United answer her call to action?

You bet they … won’t. Stargirl is off planet. Supergirl isn’t speaking (Kara’s Futures End tie-in will apparently present her as an evil cyborg, so fair enough). Alana is ‘in no shape’ after something happened to husband Adam Strange. Green Arrow is dead. And worse, Animal Man is henpecked.

Hawkman isn’t even mentioned, though readers of the weekly Futures End title know he’s been a Stormwatch member for awhile at the time of this story.

Nothing for it but to ask the regular Justice League – Cyborg, Stormguard, Vostok, Dawnstar, Flash – for help. As J’onn has been acting as super-warden on Mars, Earth’s prison planet for the worst super-villains, and there’s been a break-out, of course they’ll lend a hand. Into the JL cruiser they hop and it’s off to Mars, where some rather formidable escapees and a surprise villain mean this gets continued in Justice League: Future’s End #1.

Which is fine by me, I had a good time with this comic and a bigger story is good. I love peeks into the future, looks at how the DC Universe will be in a five-years-later you can guarantee won’t ever arrive.

I like that Equinox has developed into quite the hero, a brave, resourceful young woman confident in the use of her elemental powers. I like the idea of a prison planet, being a Legion of Super-Heroes fan, where Takron-Galtos was all the rage.

I like that Legionnaire Dawnstar is in here – yeah, she belongs in the 31st century, but this is just a possible future, cleverly teasing the outcome of the upcoming JLU encounter with the Legion.

I don’t like that Dawnstar’s unique tracking abilities aren’t brought into play in the search for J’onn – once the team lands on Mars she should hone in on him in 20 seconds flat. Instead she’s presented as simply a flier, a Hawkperson substitute.

And for goodness’ sake, what’s with Cyborg’s casual sexism?

As for Animal Man being too nervous even to let wife Ellen know he’s been asked for help, I don’t believe it. There’s a friend in need, and a threat to Earth. Sure, Ellen’s suffered due to Buddy’s position as a hero – they lost son Cliff due to his being Animal Man – but she’s no shrew, she’d support a rescue mission for J’onn.

I’m hoping next issue we learn a bit about Stormguard’s abilities – he’s been popping up in Future’s End and I can’t recall a single thing about him. As a failed Aquaman and the Others reader, a lesson in Vostok would also be useful. Writer Jeff Lemire – whose work in JLU I’ve enjoyed hugely – should be introducing his characters a little better. The relationships are there to be seen, but the basics – who is this hero, what do they do – are missing.

Weighed against the overall imagination and fun of this book, though, the problems listed count merely as quibbles. Lemire does a pretty decent job with an imposed editorial event.

Drawing the book is Jed Dougherty, a new name to me. I like his confident way with people – great facial expressions, fine body language (check out Maxine Baker going off in a strop). The action moments are pretty standard, but they work well enough. And it’s all coloured with style by Gabe Eltaeb, who also shows up for the excellent lenticular cover drawn by Mike McKone. The transition between today’s team and the 2019 version works stunningly well.

All in all, JLU: FE is no classic, but it’s a fun ride. It’s a shame Equinox is the only active member, but we see and hear enough about the others to keep me happy. And would anyone be surprised to see Buddy – and maybe ‘Little Wing’ Maxine – show up for the finale?