Five years from today, she is Bete Noir, the Beast of Gotham, running a trio of Batgirls. She’s cleaned up most of the city’s crime, and now the teacher Barbara modelled the Beast on is back in Gotham: Bane – the man who broke the Bat. And before he blows up the city, he plans to break the Beast.

Whoa! This is dark stuff. From the horror of the opening through the trials Barbara puts herself through to become a more effective force against crime, to Bane’s reading of her desires, this is grim. There are light moments – Stephanie Brown Batgirl uses the goop so beloved of an earlier version of the character, Tiffany Lucille Fox Batgirl whines about being sidelined out in the field – but this is one downbeat comic.

You likely know that Simone’s run on the regular Batgirl series is over, to be supplanted by a lighter approach. Without having read a page, the internet loves loves LOVES the new Barbara Goes to College take, DIY costume and all. Simone is perfectly capable of running such a book, but as she’s so associated with super-gloomy New 52 Batgirl, a new writer and artist sends out the message of a new beginning. Fair enough, Simone is a professional, and she has a new Secret Six in the works (which the internet loves too).

Still, looking at this comic, it’s as if Simone decided, as she departed, to take the mickey out of the prevailing New 52 tone, amping the darkness beyond 11. 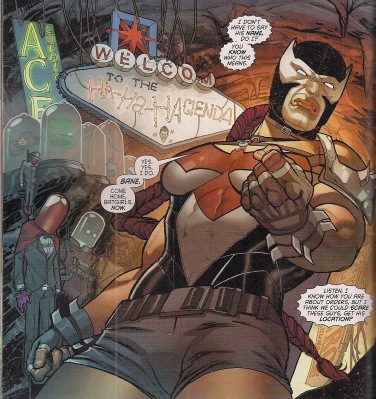 So Babs is a hulk of a woman, less Batgirl than Butchgirl, clad in a Bane mask even as she takes Gotham’s gangsters down. On the way to where she is today, she snapped the neck of a man purely to get Bane’s attention. Where Batman put his friend Lucius Fox’s son on the streets in a Batwing suit, Beast Barbara lets Fox’s untrained 12-year-old daughter Tiffany run around with Steph Brown and Cassandra Caine.

Is there light at the end of the Gotham tunnel? Maybe. Simone likes Barbara too much to abandon her to the darkness completely. And thank the stars for that – if this is her last play with Barbara for awhile, I’m happy the big-hearted, compassionate heroine we know survives.

If you’re looking for specific Futures’ End (FE) links, look elsewhere, you won’t find them here – there’s no reference to the Earth 2 war, or Brother Eye, Cadmus or any of the other foundations of that series. Like most FE DC books, Batgirl goes its own way, embracing the question: ‘where might my character be in five years if she could go anywhere, somewhere the eventual five-years-later books wouldn’t allow?’ And on that basis, this issue works. Simone continues the themes of her Batgirl run, catches us up with some of the characters, and goes a bit bonkers. There’s a sense that this is a book without a safety net, which is exciting, but when things end rather positively, I couldn’t be happier.

The dialogue is a delight, from Barbara’s opening narration through to her closing thoughts. And because she plays well with others, Simone absents James Gordon Sr from the wedding, without saying he’s dead, meaning he may still be in jail as per the current Batman Eternal weekly. The Batgirl battalion is a smart way to acknowledge Barbara’s legacy, including previous continuity Batgirls Cass and Steph, and showing there’ll likely be more. The story also winks at Barbara’s old Oracle persona, with her running a team from a secret headquarters. Said HQ is the Ha Ha Hacienda, the Joker’s 1970s bolthole, which may be Simone showing that the Beast has beaten her worst enemy by metaphorically inhabiting his soul.

Or maybe it was just empty and on a bus route.

Bane was one of the revelations of Simone’s Secret Six series, and she grabs the chance to reintroduce him here. Sure, Bane has appeared a few times in the New 52 continuity, but this is the first time it’s felt like the version I loved, housework, daughter obsessions and all. 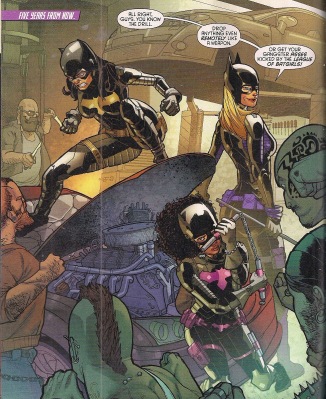 The odd cheesecake pose aside – check out Steph on the splash page, that’s exactly how a superhero begins a battle – I rather enjoyed Javier Garron’s work. The storytelling is good, the poses true and the facial acting fine. A flashback to Barbara’s training incorporating incongruously fun-looking Polaroids elicited a grin. Decent colours, too, from Romulo Fajardo Jr and letters from Saida Temofonte (usually to be found on the excellent DC Digital titles).

It took me awhile to find the right angle, but the lenticular treatment for Clay Mann’s cover, coloured by Fajardo, works well.

So, while not the Barbara Gordon I want to read, and probably not the Barbara Gordon Simone prefers to write, as enforced tie-ins go, Batgirl: Futures End is a good read. More than ever it has me hoping Bane will join Simone’s new Secret Six soon. As for Barbara, I’m looking forward to some lighter stories – and I wouldn’t be surprised if Simone isn’t too.