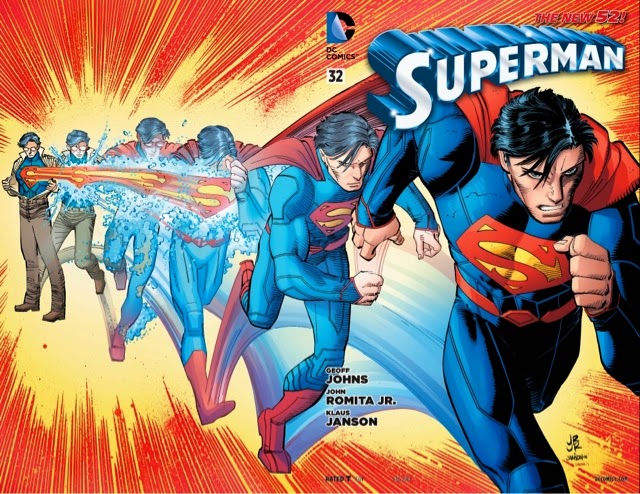 And here it is, the much-hyped debut of the new Superman creative team. The wraparound cover sends the message that writer Geoff Johns and penciller John Romita Jr are out to inject energy into this book. While the image-to-image chest symbol blurring doesn’t come off, stopping after the first few Superman figures, and his calves look like horses’s legs, I like that Romita – with inker Klaus Janson and colourist Laura Martin – are giving us some classic Superman imagery right from the off. I’m not keen on the glassy Superman The Movie logo treatment, though, it’s too specific a callback, and doesn’t work with comic art as the backdrop.
Behind the cover, Johns sets some new balls rolling: old favourite Titano the Super-Ape is now a robot; Perry White asks news blogger Clark Kent to rejoin the Daily Planet; Jimmy Olsen wants his parents’ lawyers – including Golden Age figure J Wilbur Wolfingham – to tell him where they’re hiding from the tax people;  there’s a new Planet hiring, political correspondent Jackee Winters. 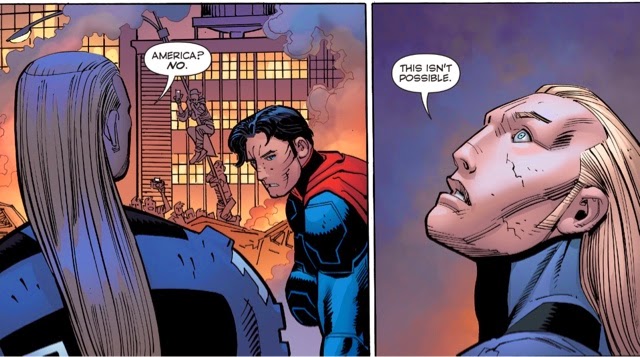 The biggest part of the issue goes to the debut of Ulysses, a new Superman-type, rocketed as a baby from an exploding research facility which may be from the regular DC Earth, or a parallel. Never mind that we’ve just had a Superman analogue in Superman Unchained, Ulysses is immediately hobbled by a singularly unprepossessing visual, with the long hair being actively horrible. Of course, Ulysses may go amazing places – the arc storyline title is Men of Tomorrow and interviews make it sound promising – but so far I’m not feeling him. 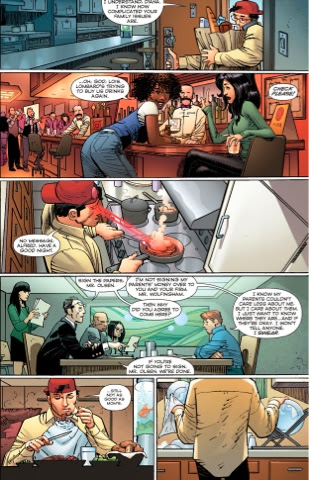 My favourite page in the book, in which we see what Lois and Jimmy are up to outside the Planet and meet Jackee, turns into a depressing sequence of Clark moping as he looks at photos of the departed Kents.
Which leads to my biggest problem with an issue that does show promise – our hero is such a massive misery. Whether as Clark or Superman, he doesn’t smile once. Perry tries to gee Clark up, get him to stop being so insular, so Johns is obviously going somewhere with this, but couldn’t he crack a smile while using his powers? Is there no joy in his life? The best Superman is an inspirational figure, not a sad sack.
Longtime Marvel artist John Romita Jr’s strongest moments in his DC debut come in the quieter sequences, especially the visit to the Planet, showing off his talents with facial expressions and body language – and hurrah for the tidiest Clark we’ve seen since the 2011 reboot. The action sequences are suitably flashy, as Superman encounters a creature reminiscent of Nimrod from the X-Men books, but – a superb Superman/Titano splash apart – didn’t engage me hugely. Things aren’t helped by Johns’ decision to have the beastie, then Ulysses, speaking in an untranslated alien tongue – it makes for a dull read. I do think Romita should give us a proper establishing shot of the Nimrod Thingie, introduce the baddie properly. 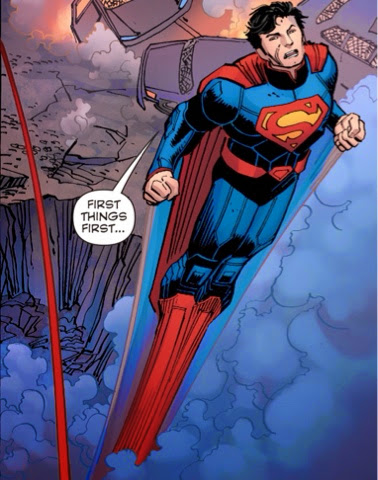 The biggest problem with Romita’s art so far is that he can’t make the current costume look good, and I have some sympathy for that. With its armoured panels, it’s a horrible, clunky design, and one which Romita and Janson will hopefully manage to make work in time. Mind, I’d rather DC sees sense and just brings back the still-marketed classic – readers of the Bleeding Cool website will note that the red trunks seen in a Planet splash in previews have been coloured away for the actual comic.
Buyers of the preceding Superman run, written by Scott Lobdell, may be peeved that there’s no mention of Lois’s Brainiac powers, which have been a big, unfocused subplot for awhile. I suppose they’re gone here, with this issue occurring after the Superman Doomed crossover ongoing in the other Superman books. An editorial note – easily stripped out of a subsequent trade – would have been gracious.
I am, though, happy that Johns is on board – given his knack for long-range plotting we can be confident everything he’s introduced is going somewhere – while Lobdell’s tendency to riff can make for excitement, it can also mean frustrating loose ends (will the Oracle ever have a point? Is that stained glass space door still just hanging around?).
Overall, a decent first issue for Johns and Romita, with more than competent support from Janson, Martin and letterer Sal Cipriano. I’m intrigued, but not wowed. The quickest way to get me totally onside would be to have Clark work through his issues, because angst and Superman are not good bedfellows. Superman should cheer the heck up.