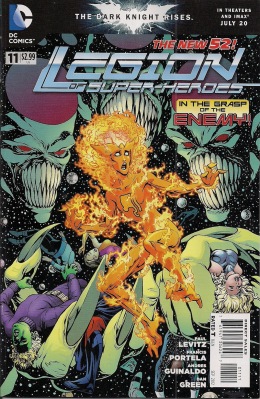 When DC’s New 52 initiative began, only three franchises escaped the big reboot – Batman, Green Lantern and the Legion of Super-Heroes. With other DC Universe books we have little idea of who the characters are, how many of their old stories ‘happened’. Not so with Batman, GL and the Legion. And of the three, it’s the Legion who keep the most history – Batman has had a 15-year career scrunched into a third of that time. Missing DCU players mean that entire epic storylines can’t have happened for Hal Jordan and co as we saw them play out.

But the Legion? Divorced from the rest of the line of DC superstars by 1000 years, they get to keep the vast majority of storylines and relationships. Odd details have changed – Duo Damsel has become Duplicate Damsel, for example, and Brainiac 5’s force shield belt is now an heirloom rather than his own invention – but these are very much the exception to the rule. After several reboots, the original Legion is back, and moving into the future with its history mostly intact.

And this month sees writer Paul Levitz, on his third tour of duty with the team, show yet again just how much a book’s continuity can enrich proceedings. In fact, I’d say this issue contains the best scene yet in his latest stint. The players are founder Cosmic Boy and veteran teammate – and current leader – Mon-El. The former is frustrated that the latter has failed to organise a rescue of Dream Girl and Brainy from the clutches of the Dominators. And here’s what transpires (click on image to enlarge).

It’s an understated moment of drama between two old friends, centred on their conflict between loyalty to their loved ones and fidelity to the bigger picture. Plus, we have the revelation that Mon-El was in on Star Boy’s assembling of the team to extract Dream Girl and Brainy. Penciller Andres Guinaldo takes Levitz’s subtly powerful script and adds the acting, the visuals that sell it to maximum effect. It’s a terrific palate cleanser after the forced, character-wrecking melodrama of this week’s Justice League. I love it.

The rest of the issue is a rollicking good read too, as we follow that rescue team to the Dominator Homeworld and see that even a ragtag group consisting of, in Cos’ words, ‘two reservists, a Legionnaire on medical leave, a youngster recovering from a mindwipe … and two prospective members’, can whup Dominator arse. Their secret? Teamwork and team spirit, of course, something their 21st-century supposed inspirations sorely lack for.

It doesn’t all go smoothly, though, as Brainy decides he can’t leave without getting his force field belt back from his captors, and Star Boy’s rescue squad hangs around to provide back-up. Worse still, a betrayal from within their ranks leaves things looking very dodgy indeed.

Levitz’ script is just great; dramatic throughout, with the funny lines arising from well-worked characters reacting to their circumstances and one another. There’s some especially good work done here with Brainy 5, as we see how he feels about his bred-for-super-genius status, and find he has some new tricks up his purple sleeve. And prospective Legionnaires Otaki and Mwindaji make a fine impression.

The pacing is spot-on too, with every scene getting enough room to make its mark, then ending before the impact is diluted. And that betrayal? Heartbreaking, if we’re to take it at face value.

Including the scene above, Guinaldo pencils just six pages, with Dan Green inking. Their work here looks a little looser than last time, with a refreshing vibe of Keith Giffen’s late Baxter style in the Mon-El/Cosmic Boy confrontation. And they gain extra points for giving new character Otaki, an empath, a lovely old-fashioned Letratone-style dot head-cloud. Blimey, it’s hard to find the proper phrasing. This!

The rest of the book is pencilled and inked by the ever-excellent Francis Portela, who never fails to make the Legionaires look proud and heroic – well, except when one is betraying another (which, let’s face it, is itself a proud Legion tradition). Of all the characters Portela draws here, my favourite is Duplicate Damsel who, on this form, will have me voting for her in the next Legion elections (click on image to enlarge).

The woman has style and guts to spare, and Portela shows it in her eyes, and the way she fights and moves.

Those vibrant colours are the work of Javier Mena and Santiago Arcas. They’re the opposite of drab, perfect for the wildness of 31st-century space.

Steve Lightle has put a lot of work into this cover, and I’m glad he did – it’s the classic superhero scene, with characters in dire straits surrounded by grinning heads of eeeeevil. And very nicely coloured by Guy Major.

One of the few DC books that gets better every issue, I’d love the company to kick Legion Lost to the kerb and make this twice monthly. Levitz can easily provide two scripts every 30 days, while Portela and his back-ups could keep things looking good. The Legion isn’t a top seller, but DC can always bank on a certain number of loyal fans buying – how about it, DC?

18 thoughts on “Legion of Super-Heroes #11 review”