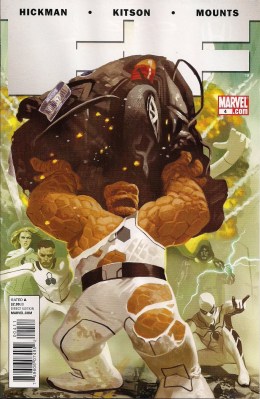 There are few super-teams that can’t be improved by the addition of a traitor. The Avengers had one in Iron Man, thanks to Kang’s time manipulations. The JSA suffered All-American Kid, aka evil Karnevil (should have been a stunt cyclist). Heck, at times it’s seemed like the Legion of Super-Heroes’ entire raison d’être is to be infiltrated.
And now, only about a week into the organisation’s existence, one of the Future Foundation kids starts acting rather suspiciously. Bentley, pint-sized clone of the Wingless Wizard, pretty much persuades Ben Grimm to take a vacation when it’s obvious the Thing’s strength, courage and pure pluck will be needed soon.
It’s a no-brainer, given that Mr Fantastic has crammed the Baxter Building with the Fantastic Four’s smartest foes. Dr Doom, Diablo, the Mad Thinker, a couple of AIM scientists, the High Evolutionary, the aforementioned Wizard … they’re gathered for a mission so desperate, even The Watcher has shown up. Reed wants them to come up with a plan to defeat four evil alternate universe Reeds set loose by the most dangerous kid on Earth – Valeria, his daughter.
Ah, Valeria. Cosmic-irradiated butter wouldn’t melt in this brat’s mouth. While Bentley’s wicked smile as Ben leaves betrays his intent, Val considers herself the good seed. She has the intellect of her father, but the undeveloped emotions of the child she is. She’s arrogant, doesn’t plan for consequences … always thinking that if, God forbid, she can’t mend a situation with her intelligence, Daddy will. Well, Daddy’s patience is running out here, and his anger helps persuade Val to finally share what she knows about the rebel Reeds’ plans.
The Council of Doom scenes are the highlight of this issue, as writer Jonathan Hickman reminds us that the various evil geniuses who have challenged the FF for decades aren’t interchangeable beneath the fright masks. Doom has the quiet gravitas of the absolute monarch, the Mad Thinker trips over the thoughts that just won’t stop coming, Diablo mocks … More useful than any of them is Reed’s father, Nathaniel, who asks a question that gets to the core of the matter.
Also this issue, the Invisible Woman makes Spider-Man a sandwich!
Actually, there’s more to the scene than that, with food fancies used to cast light on the personalities of the Future Foundation kids, and Spidey learning that former ‘professional hostage’ Sue has killer confidence these days. He sees Sue’s will to win in action when she receives an emergency summons from Atlantis, of which she’s currently Regent. Rather than interrupt Reed and co, she leaves the avuncular Dragon Man in charge, gathers up gravity-controlling intern Alex Power and Spidey, and heads off to Old Atlantis. And there they find one of the Fantastic Four’s greatest enemies, one of the few not at the Council of Doom – Mole Man, complete with pesky Moloids and the big beastie from Fantastic Four #1 back in 1961.
There’s an interesting offhand comment this issue. I may be reading too much into it, but Sue refers to ‘my bedroom’. Is she still mad at Reed over Johnny’s death?

After all these years it’s amazing that a writer can find another side to Victor Von Doom, but his face as it dawns that Reed is more afraid of ‘himself’ than he’s ever been of him is a picture. It’s not just his face, it’s his bearing too, for this issue boasts comic art by a real master – Barry Kitson. The storytelling, the nuanced emotions captured, the action sequences – every page is a lesson to younger artists, without ever stopping the story to draw attention to itself.
And colour artist Paul Mounts deserves massive praise. He’s been one of the Fantastic Four’s MVPs for years, but he’s gotten even better lately. And I can’t recall his work ever looking as great as it does teamed with Kitson. I’m a big fan of regular penciller Steve Epting, but given Marvel’s current policy of double-shipping books, I hope Kitson is on board as back-up, with Mounts his partner.
The only artistic iffiness with regards to FF #3 relates to Daniel Acuña’s cover, with its soft focus, doughy Thing. And that FF logo is just terrible, fading out of sight – I missed this issue on my first go-round of the comic shop shelves, could we have a more powerful, less designery masthead please?
Otherwise, this is an excellent issue of the FF. I’d prefer it was a Fantastic Four book, complete with the Human Torch and costumes that don’t hurt the eyes, but that’ll come. For now, Hickman and co are delivering a nice package of quality entertainment that’s firmly based in the FF’s playground.
http://rcm.amazon.com/e/cm?t=t0a74-20&o=1&p=8&l=bpl&asins=0785136886&fc1=000000&IS2=1&lt1=_blank&m=amazon&lc1=0000FF&bc1=000000&bg1=FFFFFF&f=ifr