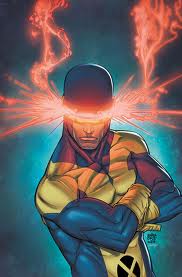 Ignore the brooding intensity of the guy on Roger Cruz’s nifty cover, this isn’t some dark exploration of Cyclops’ character. It’s a fun side story from the early days of Professor Xavier’s School for Gifted Youngsters in which our hero takes on, among others, Batroc the Leaper and the Circus of Crime.
Scott Summers’ personality does factor into the story, though. It begins as he drops into New York’s Coffee-A-Go-Go after a day which saw his fellow X-Men suggest he stops being such a Tommy Tightarse. Scott can’t see a problem: ‘I just want them to know what I know: that in this life you have to come prepared for everything.’  By the end of the story, Scott’s learned that there’s more to life than quoting from The Art of War – you can improvise against the bad guys, and even have fun along the way.
Lee Black’s script is a thing of jollity, revelling in the days when the X-Men didn’t have to grapple with species extinction before breakfast. The opening, with Batroc and the Circus of Crime bursting into the coffee shop in a tricked-up Mini, forcing flirty waitress Zelda into the arms of the ever-uptight Scott, is a hoot. And the villains relaxing after pulling a job with a visit to the Metropolitan Museum of Modern Art is nuts, and why not? Adding to the levity are any number of throwaway lines, such as The Clown referring to Batroc as ‘Mr the Leaper’ and Cyclops speculating that the ultimate mastermind is ‘Baron Von Antiques Roadshow’.
Dean Haspiel has enormous fun drawing the likes of Batroc’s marvellous mini, and Cyke on a bike, while Jose Villarrubia gets to forego his usual subtle tones to fill the eye-popping panels with wild primaries. It all makes for a good-natured Cyclops romp of the type we could never have today. One-offs that aren’t tightly tied to – some might venture ‘mired in’ – current continuity tend to get overlooked in the direct market; I’d suggest seeking out this joyously irrelevant bauble.