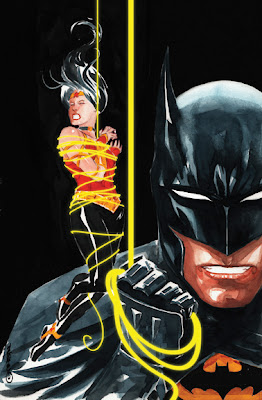 In which Blue Beetle is alive and kicking, Batman and Power Girl arrive for the final battle and Max Lord puts his endgame into action.

As predicted here – well, pretty much everywhere – Jaime Reyes survived Max Lord’s bullet to the head thanks to his extraterrestrial armour. Reunited with a hysterically happy Justice League, he’s able to share information picked up from Lord’s computer systems; everything Max has done has had only one goal in mind – the murder of Wonder Woman. The League vows to prevent this, the only wrinkle being that some members don’t actually remember Wonder Woman, thanks to some as-yet-unexplained jiggery pokery in Diana’s own book.

This leads to a wonderful moment when Rocket Red dons a mangled, holographic version of Wonder Woman’s costume, based on the way she’s described by his associates. He looks rather hot, actually.

Elsewhere Max, with the help of longtime League enemy Professor Ivo, is enacting his plan, which involves activating a new wave of Omac cyborgs to hunt down and kill Diana. And they arrive just as the League has tracked her down in New York City, tying in tightly with the current wave of Amazon assassinations there (and giving us an answer as to whether events in the Wonder Woman book happened years ago, or are happening in the relative ‘now’ – I won’t be surprised should Diana’s own title give us an entirely different spin).

It’s another top-notch issue from the pen of Judd Winick, as he gears up for #24’s extra-sized conclusion. I’m glad that Wonder Woman enters the fray here as Max’s ultimate hate figure – so she should be, given that she snapped his neck a literal lifetime ago. It’s just a shame today’s continuity-challenged Diana won’t actually remember this. I’m itching to see how Winick resolves the situation.

Apart from Rocket Red’s dress-up, my favourite scene this issue is the League’s reaction to the return of Jaime Reyes – uncontrolled joy. Usually when a hero comes back from the dead it’s a matter of a quick pat on the back and off to the next super-skirmish. This treatment felt real. And it’s very well depicted by penciller Joe Bennett … I don’t think I’ve ever seen the Justice League in giddy mode.

Inked by Jack Jadson and Ruy Jose, Bennett does a fine job throughout, especially in the scenes that show Max hooked up to Ivo’s machines, which fair throb with power. It’s all splendidly coloured by Hi-Fi, and lettered by Steve Wands.

Wands may also be responsible for the cracking mini-logo gifted Diana on this issue’s cover. I hope the Wonder Woman office picks up on it, and uses it. Dustin Nguyen’s striking image, with Batman using the Golden Lasso to dangle Wonder Woman painfully, is a 360-degree misrepresentation of the issue’s contents. And a heck of a grabber.