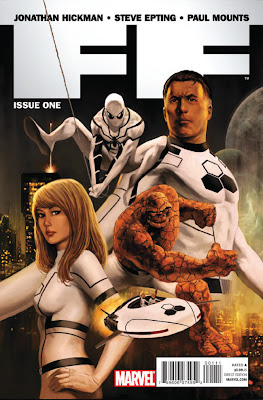 ‘All death leads to rebirth. We must begin anew.’ So says a rogue AIM boffin at the beginning of this book, and so says writer Jonathan Hickman to Fantastic Four fans. Having been refreshing the book that began the Marvel Universe, Hickman starts again with a new title. No one expects it to be more than a publicity and sales generating placeholder until the regular comic returns in time for its 600th issue, so I’m happy to sit back and enjoy the ride until then.

So, the Human Torch is presumed dead and Sue Richards has found herself Regent of Old Atlantis. Ben is blaming himself for Johnny’s demise in the Negative Zone and Reed is focusing on ‘solving everything’ with the help of a coterie of super-intelligent kiddies he’s named the Future Foundation, giving this book its title.

New stuff here includes Spider-Man joining the team at the request of a posthumous, holographic Torch, the revelation that Reed’s time-travelling dad has moved into the Baxter Building, and Sue putting everyone in new uniforms.

The new, super-faffy looks are motivated by her gloomy state (‘Feels like a black and white world right now, doesn’t it?’). Rather than try and move forward after the loss of her brother, the Invisible Woman is wallowing, and spreading the misery around by making everyone dress down. It’s not the best example for son Franklin, devastated by the loss of ‘Uncle Johnny’.

Franklin’s sorrow makes for one of the best moments in the issue, as he stops Spidey from sitting down for a meal in Johnny’s usual seat. That’s followed by my other favourite point, the super-rational, species-varied FF kids saying grace – a brilliantly amusing sequence.

Frank’s irritating sister Valeria’s big scene sees her bringing an unexpected member into the club (we’re talking last page surprise, so I’ll leave that one alone for now – let’s just say that regular readers of the Fantastic Four won’t be aghast, and Reed’s agreement is unbelievable). There’s a pleasing irony in that scene as Reed lectures Valeria that she doesn’t have carte blanche to do whatever she likes – it’s Mr Fantastic Black Kettle.

The action sees the new Fantastic Four called out to some scientific facility called P.A.V.L.O.V., where those aforementioned AIM types break the Wizard out. He lets Reed know that he’s coming for Bentley 23, his boy clone and Future Foundation member, which worries Reed for a moment, but this is apparently forgotten by the time Nathaniel serves up his roast dinner.

While I can see that Peter Parker would be thrilled to bits to see the Baxter Building as it transforms into a Futurists’ playground, I can’t imagine him joining up without leaving the Avengers. Many times, he’s seen that spreading himself too thinly leads to disaster. Plus, while in his day job he researches scientific advances, I can’t see him acquiescing to Reed’s ‘let’s force the future’ attitude. Happily, someone does raise their voice against his tossed-off idea to terraform the Moon, probably by suppertime.

On a similar note, when Sue mentions that she’s assumed ‘full control’ of Old Atlantis, it’s as if she’s forgotten she already has a life, with responsibilities and people who depend on her – I’m not saying a mother is all Sue should be, but certainly her kids need her. Even Reed shows more interest in his children here than Sue does. Let’s assume it’s a deliberate plot point, and see where it goes.

There’s enough good stuff here to bring me back next month, but I do hope the mournful mood is put to one side. Sure, Johnny is gone, and the people in the book feel it, but I don’t want every issue informed by sadness. I get it, the Human Torch was a vital, underappreciated member. I always got it.

Hickman does a fine job in capturing the voices of his main cast, when you factor in that even Spidey would be a little quieter than usual. What I really want to see is something emerge as the main threat, rather than the team’s attention all over the place as has been the case of late – splitting their forces is what got Johnny killed. If next issue concentrates on the Wizard’s bid for Bentley, with a subplot or two, fine. If the book drifts, I’ll likely drift too.

Steve Epting’s illustrations are excellent, as inked by himself and Rick Magyar, and coloured by Paul Mounts. There’s nothing awe-inspiring to draw, as there surely should be in a showcase Fantastic Four book, but the world of the FF is good-looking and vibrant. It’s just a shame about those costumes, which really are an eyesore.

Hickman’s interest in graphic design manifests with a wasted title spread at the front of the book, and a guide to the cast at the back which would be more useful were we given visual details rather than silhouettes. It’s just about possible to work out which Moloid is which from relative heights as seen in the story, but a straighforward pin-up would be more appreciated. For $3.99, we should be getting as much story as possible, not stuff that should be trade paperback filler.