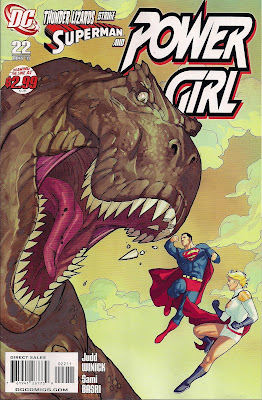 Power Girl and Superman take on a dinosaur invasion of Manhattan. Karen Starr takes back her assets. And Superman takes his life in his hands by pointing out that her more personal assets could prove problematic.

Let’s take that last first. Yes, Superman, that well-raised smalltown boy, obliquely brings up the subject of Peege’s proud chest. It’s prompted by her telling him that she’s planning to become a public personage in her other identity of Karen Starr, a friendly corporate figurehead to help sell Starrware products.

So Peege’s kinda sorta cousin has a fair point when he says that if she’s going to be appearing on TV, posters and at events she should ensure her public ID looks less like Power Girl – at the moment they’re identical bar wardrobe and Karen’s natty updo. Sadly, we don’t hear his suggestions (knowing him, it’s a pair of rubbish glasses and greasy hair), as that’s when the prehistoric predators show up in Judd Winick’s sassy script.

And what fine dinos they are, as illustrated by Sami Basri and coloured by Jessica Kholinne. They’re scary, but not to our heroes, who dive in and bash away, until some unexpected scratches clue Superman in as to their true nature. There follows an amusing moment as he tests his theory, leaving Power Girl to gawp. His discovery leads us to the final page, in which a superhero guest is revealed as the unwilling pawn of the mastermind behind the day’s nuttiness. A superhero who’s been gagged …

Yes, it’s Zatanna – she’s gotten herself captured again and despite her Vaudeville background, still not managed to learn enough ventriloquism to master the simple phrase ‘Gag ffo!’ No doubt she’ll get to show her stuff next issue.

Continuity-wise, this issue is interesting in being set post-Justice League: Generation Lost. Nothing’s really given away, though it hints at a happy ending – Karen’s all smiles. Also, it blows away the notion that Superman can’t appear in any current stories while ‘Grounded’ is running in his own book, as he’s superheroing like a good ‘un here, with not a whiff of angst.

What there is, is a convincing portrayal of the relationship between Power Girl and Superman as superheroic colleagues, and newish relatives feeling their way around one another. It’s typical of Winick’s sure touch on this book. And Basri captures all the subtleties of character, while also having fun with the big monster meet.