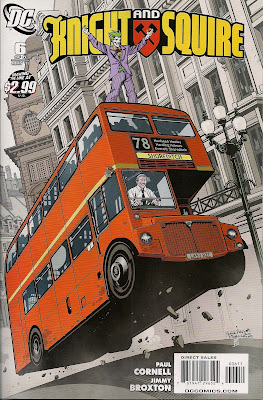 Time to stop play, just for today, Jarvis is saying goodbye … goodbye …
Would Jarvis Poker the British Joker survive the unexpected and unwanted visit by his role model? That was the question that concerned me as I approached the final issue of this six-part series. For creators Paul Cornell and Jimmy Broxton have made the old bugger, riddled with cancer, quite the appealing soul. Surely with all the magic in England, he’d make it out of the book alive.
Well, I’m not spoiling that story point. Either you’re reading the comic, or you’re jolly well going to order this summer’s trade. I will say that the lads don’t disappoint. And neither do our stars, Knight and Squire, as they gather Britain’s finest heroes and villains in a valiant bid to bring down terror tourist the Joker. Having kidnapped Jarvis in a bid to teach him to be not simply a whimsical ‘cover version’ of a US villain, but a killer clown, the Joker enlists help. Help to murder as many Limey heroes as possible, in amusingly apposite ways (click on image to enlarge).

The first hero killed was the Shrike, and it turns out he wasn’t offed simply because he happened to be around when the Joker showed up in London. The Harlequin of Hate wanted the supremely intuitive Squire distracted, and slaying her new boyfriend seemed the way to go. But Beryl’s made of stronger stuff, and with Knight – who offers some touchingly sensitive words – she sets about taking the Joker down.
Just how they do this, you may guess if you’ve been reading the series; I don’t call that predictable, I call it playing fair – it’s cricket. And with Cornell at the bat you’re never going to guess the entertaining details. Let’s just say that the Joker will be leaving Blighty forthwith.
Actually, that’s the one thing I didn’t like this issue. The fact that the British heroes and villains play nicely, sending the Joker back to Arkham rather than straight to Hell. These chaps are on a battlefield the Joker created, and fair play would allow him to fall on said ground. With perhaps a little push from Ernie the Fastest Milkman in the West, Leatherchap or Dr Retina.
But, the Bat-office requires that the Joker must always bounce back to Gotham City and be available for more consequence-free mayhem. At least the Colonial Prince of Crime leaves knowing he’s been humiliated by his British betters.
And I leave this series hoping for a sequel. Surely no one could deny me more of Cornell’s sublimely plotted, pun-packed stories, full of froth yet dark around the edges? Or Jimmy Broxton’s whimsically realistic United Kingdom, replete with ordinary, and extraordinary, people whose stories are etched onto their faces, and streets heaving with sight gags. Of a chance to spend more time with Cyril and Beryl, Hank the Butler and Mrs Hutchinson, the massed ranks of the British super-community.
How about I invite all members of DC staff to the Royal Wedding? I can do that, all Brits know the Queen …
While I’m waiting, I can re-read these six issues, which masterfully combined the DC Universe with that of the British comics I grew up reading, and the culture that shaped me. It’s been Batman meets Bunty on the set of Are You Being Served. The story’s called For Six, but Cornell, Broxton and company scored a century.
http://rcm.amazon.com/e/cm?t=t0a74-20&o=1&p=8&l=bpl&asins=1401230717&fc1=000000&IS2=1&lt1=_blank&m=amazon&lc1=0000FF&bc1=000000&bg1=FFFFFF&f=ifr

9 thoughts on “Knight and Squire #6 review”