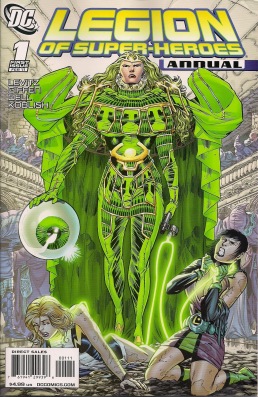 One of the Legion’s oldest foes is back – and she’s not. A new Emerald Empress emerges on Orando when a young woman, fleeing from a nobleman out to ravish her, winds up in thrall to something far deadier. At one with the Emerald Eye of Ektron, she conquers her people and sits around in garish finery for a year, building a court, tearing down a planet and plucking passing starships out of the sky.
One, though, contains holidaying Legionnaires Shrinking Violet and Lightning Lass, and they’re not afraid to mount a challenge to the Empress. Soon fellow members Sun Boy, Gates and Sensor Girl have arrived from Earth and the green energy really hits the fan. It’s a true battle royal, what with Sensor Girl being Queen (nee Princess) Projectra, the ever-offworld ruler of Orando. Her absence left a power vacuum for the Empress to fill. But is she the one to save the day, the Legionnaire left with a glowing green eye and a strange addition to her breast?
I’m not saying. Buy the book already, it’s a thoroughly diverting self-contained Legion tale courtesy of current writer Paul Levitz, and his onetime partner on the book, artist Keith Giffen. The script rattles along at a splendid pace, with the incoming Empress suitably loony and vicious, and the Legionnaires determined to stop the Eye and save the possessed host. There’s a teasing glimpse of the Eye’s earliest days – I swear those guys are from Apokolips – before the Eye is taken out by a combination of intelligence and super-powers. The Legions’ smarts are on display throughout ‘Here Eye Am’, along with members’ confidence in themselves and one another – this isn’t a bunch of bickering teens, it’s a focused force for good.
One thing missing from the script, though, is a working definition of the Eye’s power levels. It blasts things a lot, and the Legion blasts back, but it’d be good to have an idea of how much of a threat it is.
Giffen isn’t a man to rest on his laurels. He’s forever tweaking his style. Partly, I think this is to maintain his interest after four decades in the comics industry. It’s likely also because he’s a proper artist – he doesn’t stand still, he experiments. He’s served a few terms with the Legion – as writer as well as artist – and always manages to surprise. This issue he surprises with some decidedly peculiar heads. Squat heads, fat heads, plain unpleasant heads … I’m not sure what effect he’s going for.
Well, except in one case. Recent artistic tweaks to the gorgeous Sensor Girl costume have been brutal. I believe this is Keith Giffen making sure we notice that fact. 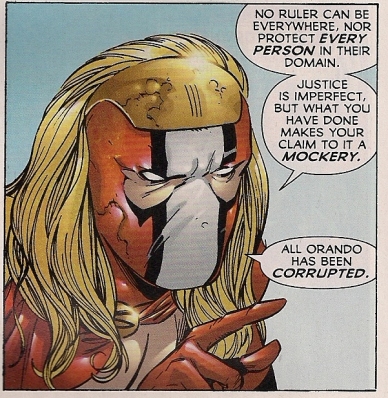 Seriously, she looks like Dr Doom’s uglier sister trying to supress a fart. Or maybe Giffen’s just gone off Jeckie – there’s one panel in which her maskless head is so square, she may as well be called Princess Pinata. DC, give Sensor Girl her previous costume back, don’t let Giffen’s efforts be for naught!
Odd noggins aside, I lapped up the artwork. Few artists work as hard as Giffen to give us fully realised worlds for his heroes to explore, and Orando here is a cracker. It’s medieval trappings are corrupted by the Eye so the entire environment looks like an overgrown mausoleum.
And the energy of the figurework bears mentioning too – rarely has Sensor Girl looked so imperious, while the Empress’s malevolence shines through. Lightning Lass and Shrinking Violet are bustier and beefier than I’ve ever seen them, but perhaps they’ve been working out (surely it’s not artistic code for their status as Sapphic sirens?). Giffen also presents creepy flying space monkeys and the scariest court jester ever, but tempers the nightmare with a very cute GI Gates. As for the action scenes, no one can blow a place up like Giffen.
Backing up Giffen are inkers John Dell and Scott Koblish, while John J Hill letters and colour house Hi-Fi gives great greens and more.
As well as the bumper story, we’re gifted a couple of back-up features. Ones that educate as much as they entertain. First, there’s a four-page Legion History Board Game providing an amusing journey through the entire canon. Finally, we know that such plot points as Mon-El and Shadow Lass’s marriage, and the Legion’s history with the Time Trapper, did take place. Brian Douglas Ahern provides whimsical spot illos, while Nathan (Emerald?) Eyring colours. I was going to guess that Levitz writes, but there’s Proty I or II standing in front of us – this isn’t scripted, it’s all true!
Then there’s an A-Z of Interlac, the language spoken in the United Planets of the 31st century. As well as showing the equivalent letters, it illustrates each one with a character or piece of history. J was apparently a toughie …
So there you have it, a tremendous blend of the old and new – a Legion comic that moves current events forward while acting as a primer for new readers and a reminder and clarifier to existing fans. I suspect Giffen’s art may give a few people pause, but I’d say, go with it; Keith Giffen is one of the true architects of the Legion of Super-Heroes, and there’s love in even the craziest line.
This is the first time Levitz and Giffen have teamed up on a Legion comic in over two decades. And it’s great. I hope it becomes an Annual event.