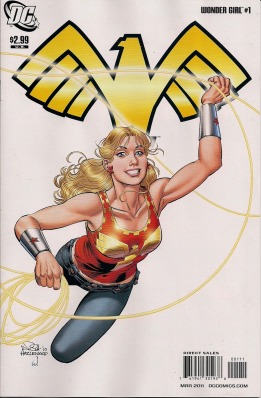 Ah, simplicity, I love you. Over in Wonder Woman there’s continuity crushing and confusion aplenty as a tweaked Diana searches for the truths of her life over the course of 12 issues or more. In this one-shot, Wonder Girl visits her mother at an archaelogical conference in London and foils a heist by mud-morpher Lady Zand, with the help of future Teen Titan Solstice.
And that’s that. Twenty pages of entertaining script and bright zappy art and we’re out. There’s a bit of angst as Cassie’s mom frets and frowns over her daughter’s warrior ways, but hey, who was it who decided to sleep with the king of the gods?
She’s had a page or two in recent Teen Titans issues, but here we get our first look at solar-powered Solstice in costume and action. And Kiran looks like a keeper – powerful, wise and perky without being cocky. She’s just what Cassie needs to stop her falling into a funk as she ponders her unyummy mummy and feckless father.
And Lady Zand, while not the best-known of villains, makes for some great visuals as she unleashes rampaging mudmen on tourists. Penciller Adriana Melo and inker Mariah Benes do a fine job throughout, both in the big scenes and subtler moments. I especially like this sequence, showing how well the artists work with JT Krul’s sharp script. The attractive lettering is by Sal Cipriano, while Marcelo Maiolo colours with class (click to enlarge). 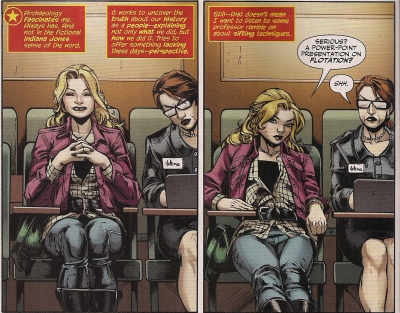 And unusually – why it’s unusual I have no idea – they draw civilian clothes as well as they do super-suits. Cassie doesn’t dress like some Lolita, she looks like a pretty, intelligent, teenage girl, while Kiran sports Indian-influenced BoHo chic. The contrasting styles look good on the page, and are one reason I’d like to see another issue or three showing these girls get to know each other.
For this book is a lovely palate cleanser, a refreshing change from the hyper-complicated ‘epic’ storylines which hog the comic shop shelves. I realise Cassie and Kiran’s new friendship will develop in Teen Titans, but If JT Krul fancies writing a sequel – call it Solstice this time – I’ll be first in line.
And if we get another gorgeous cover by Nicola Scott, Doug Hazlewood and Jason Scott, so much the better. 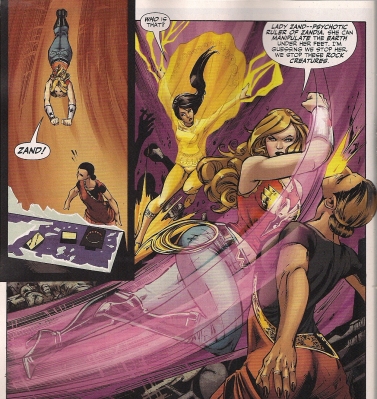