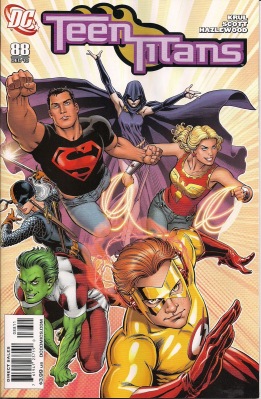 I don’t know how many times I’ve dropped this book, but here we go again – new creative team, new day. So hello to writer JT Krul, penciller Nicola Scott and inker Doug Hazlewood.
A few members have departed since last I read this book – nasty Bombshell, lovely Aquagirl – but the rest of the faces are familiar. There’s Wonder Girl, Superboy, Impulse, Beast Boy, Raven and (God help us, is she actually popular?) Ravager. The setting is still San Francisco and the villain is one Doctor Caligan, who looks like Hot Stuff by way of the Imperial Wizard. Caligan is certainly a name to conjure with – he announces it in large, decorative font as if we’re going to be filled with awe and fear. So far as I can gather, ‘Caligan’ is a heavy-soled military boot. Scary.
Mind, the kid he’s about to experiment on here looks rather perturbed, as you’d be if your biology teacher persuaded you to let him shave your head and strap you to a table – young Barney is realising he’s officially Too Stupid To Live. It’s not like he didn’t see a malformed, caged fella in Caligan’s lab, having been picked up outside the local Lamb Market.
Earlier in the issue, the Titans battle what must be Caligan’s experiments, a gang of feral chaps who emerge from the sewers. The Titans, not having a resident genius, send a DNA sample to the JSA’s Dr Mid-Nite who announces that ‘It’s definitely genetic manipulation’ and adds, ‘It’s deliberate’. He’s soooooo clever.
The beast men aren’t very interesting so far, but perhaps Caligan will prove a worthwhile evil genius. Anything to delay another visit from the overused Deathstroke.
So, Rose Wilson, Ravager, is in Titans Tower, thinking about her mother, Lillian, and dad, Deathstroke. Damn.
I’ve never understood why a team like the Titans keeps a disturbed young woman with a huge great sword around. Leader Wonder Girl explains it this issue – she’s an old hand who can be depended upon in a fight. This remark comes after Rose chops off the young hand of one of the transformed unfortunates. Sure, he bit Beast Boy, but still … heroes, anyone?
Credit to Krul for immediately giving every member a little plotline: as well as an oddly bearable slasher Rose, there’s Impulse seemingly about to ‘invent’ a Legion time bubble; Beast Boy pitying young heroes in love while devouring Jane Austen on TV; Superboy realising Wonder Girl is likely to kick him off the team because she can’t bear seeing him in danger, the loony; and Raven having her 400th battle with her evil side. All righty, so the subplots aren’t all winners – every time I return to the Titans Wonder Girl is being a moody mare – but at least the spotlight is being shared around.
And there’s a lot more fun on the horizon with the arrival of the new Robin, Damian Wayne, brought by a strangely Dickish Dick Grayson to make some friends. Good luck with that.
There’s nothing in the script that knocks my socks off, but Krul’s previous work on Titans specials showed promise, and now he has the regular gig, perhaps he’ll fly.
If not, it won’t be for lack of decent art, as Scott and Hazlewood debut with their usual combination of grace and power. For the first time I believed the Titans were in San Francisco, thanks to the attention to scenery. And the team members look marvellous. It’s especially good to see Wonder Girl approached not as sex kitten but as an almost demure teenager – remember, she was introduced by John Byrne as a bit of a tomboy. Mind, I don’t like the grey jeans – too drab. Superboy is just adorable, with his slightly glazed jock expression (appropriate, given that Wonder Girl reminds me a little of Quinn from Glee).
Plus, there’s a great shot of a transparent Titans Tower showing us how Raven senses the Titans’ emotions these days. I could do without the link to the rainbow world of Green Lanterns, but the ‘fear’, ‘anger’, ‘will’ stuff makes sense in terms of where DC is these days (though I still don’t get how ‘will’ is an emotion).
Yes, Scott and Hazlewood suit this title down to the ground – unfortunately, the few pages of Batman and Robin virtually guarantee they’l be wafted away ere long to the streets of Gotham.
For now, though, they’re Titans property, and a major factor in my deciding to follow this book for awhile. Scott, Hazlewood and Krul have the comic feeling fresh for the first time in awhile. So long as that tremendously entertaining little ratbag Damian doesn’t dominate, we could be in for a more than decent run.