How do you solve a problem like Magneto? That’s the question in the second issue of this mini-series starring the Young Avengers. Having learnt twin members Wiccan and Speed – his kinda, sorta grandsons – are planning to find their mystic mother, the Scarlet Witch, the Mutant Master of Magnetism wants in. After all, he feels partly responsible for the breakdown which saw her depower most of the Earth’s mutants, leading to the death of some and ruination of others. Or so he says.
Sixteen Going On Seventeen That’s pretty much what Wiccan tells Spider-Man he is when the Avengers show up and point out that teaming up with Magneto isn’t the grooviest of ideas. Spidey notes that having been a teen hero himself, he knows when someone is in over his head. But Wiccan is still a teen hero, so he ignores the grown-up and soon the Young Avengers are heading to Transia with Magneto. Wiccan is confident he can use Magneto as Magneto likely wants to use him. Because while he’s currently an X-Man, Magneto has reversed polarity on the hero/murdering terrorist scumbag scale enough times to make his claims to have chosen the nobler path for ever, somewhat dubious.
My Favourite Things Allan Heinberg has worked hard here to ensure his story beats arise from characterisation – this isn’t a book in which characters could swap roles and dialogue, everyone has a part to play. So there are too many wonderful situations and exchanges to mention, from the angst-free relationship of Wiccan and Hulkling to the introductions of the twins to Magneto and ‘Uncle Pete’. Yup, Quicksilver shows up to throw his own super-speed spanner in the works. Still, there’s one moment that, if you’re wavering on whether to buy this book, may just sell it to you. Deep in the Mittel-European land of Transia – ancestral homeland of the Scarlet Witch – Wiccan conjures up a disguise so the Young Avengers and Magneto can blend in … (click to enlarge) 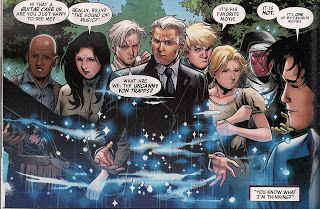 The big question is, would the Vision be an asset to the Abbey?
Climb Ev’ry Mountain Search high and low, and that’s what our heroes are willing to do in order to find Wanda. But Magneto has a better idea, and it makes for a poignant scene and a great excuse for necessary exposition.
Edelweiss Er … um … it’s a white flower found in the Alps and the group is looking for a Scarlet Witch around Mount Wundagore. No? Well, it’s a pretty lovely thing, and that’s what the artwork of penciller Jim Cheung and inker Mark Morales is too. You’d be hard-pressed to find crisper superheroic storytelling than we have here – every moment is perfectly sold. There’s action, emotion and a great example of how to present two teams on one spread without randomly inserting figures – all the spatial relationships make sense. Cheung even remembers to go high so that Stature (I still say call her Big Girl) doesn’t have to be squatting to get ‘screen’ time. Justin Ponsor colours for night-time in the first part of the book, springtime in the latter, and the contrast serves the story well. And while there are more words here than in many a Marvel Comic, Cory Petit keeps everything looking nice and clear.
Do-re-snikt! Look, there’s Wolverine hogging the (admittedly magnificent) cover and covering up the subtitle. Still, if it shifts some copies and means more YA stories later, it’s fine by me.
So long. Farewell But come back in two months because now we know who’s holding Wanda (and likely a Lonely Goatherd) prisoner, the sparks are surely going to fly. Let’s just say it’s someone with an ego to match those of Magneto and Quicksilver. And there can only be one victor.
////////////////////////////////////////////////////////////////////////////////////////////////////////////////////////////////////////////
This review is dedicated, with thanks, to my chum Joe Fludd, from whom I nicked the first line … join him at The Quantum Blog for intelligent and entertaining musings on comics. Then come back here for more of the same old tosh.