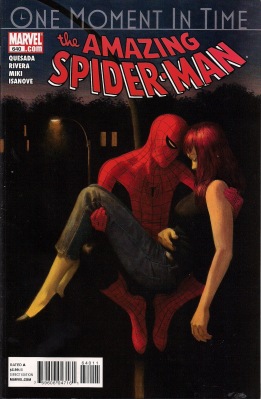 So far in the current telling of the post-One More Day history of Spider-Man, we’ve seen why Peter Parker and Mary Jane Watson never made it to the altar. We know how Aunt May survived an assassination attempt. This issue we learn just how bad things get that Peter decides to ask for help to restore his secret identity, make the world forget the well-considered yet stupid decision to ‘come out’ in support of the Superhero Registration Act.

What happens is that Anna Watson is first targeted, then the would-be hit man turns his attention to her niece, MJ. The highlight of the issue is the struggle the latter puts up against former Elektro hood Eddie Muerte – it’s not one of those ridiculous fightbacks in which an ordinary person manages to hold out against a super-villain; it’s one very determined, very scared young woman staying just a step ahead of a seasoned crook … for awhile. When he finally pins her down, she shows the strength of character and sense of sacrifice that led to her making the deal with Mephisto to save Aunt May’s life, unravelling her own.

While the demon lord is neither seen nor mentioned this issue, his influence does seem to be present in the shape of a nurse who’s been feeding information about May to hitman-hirer Kingpin (Wilson Fisk is also in Mephisto colours). That apart, what we have here is the story that Marvel probably should have just given us in the first place – MJ and Peter split up because, well, sometimes people do, and Peter’s secret ID is restored by powers as strong as Mephisto, but on the side of good.

Not that we see the folks at the end of this issue sort the matter out, but things seem to be heading in that direction. Whatever happens, I’m confident that this story that didn’t need to be told will at least resolve decently.

That is, if writer Joe Quesada carries on as he has been doing. Apart from a little too much angst last issue, the story of Spider-Man’s world slowly falling apart has been nicely measured, and beautifully rendered by Paulo Rivera (who also provides the moody cover illo). And in the present day linking pages – illustrated by Quesada, Danny Miki and Richard Isanov – both Peter and MJ come across as adults who, while not perfect, never doubt their love. I’m chomping at the bit to see where we leave them next issue, as the Spidey editorial office prepares for the end of the creatively excellent Brand New Day period.

This issue also sees another Spidey Sundays two-pager. It’s written with a lovely light touch by Stan Lee, and delightfully drawn by Marcos Martin, but terribly out of place in the current run.