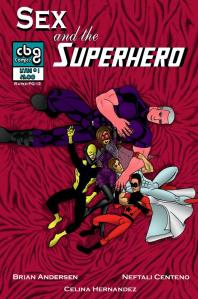 More accurately, that would be Sex and the Gay Superhero, as all the metahumans in here are pretty darned queer, from the terribly camp Cosmic Man to the so-macho-he’s-even-camper Pink Storm. There’s also Captain Avenger, the hero you could take home to your mother, sole female Lady Web and the hilariously named Street Diver. Individually they’re awesome fighters for justice. together they’re . . . a right bunch of gossipy old tarts.

Seriously, whenever this lot get together they follow the Golden Age JSA-er model of swapping tales of their latest exploits, but said adventures tend to be sexual. Some involve the sort of non-Comics Code-approved situations we’ve likely all speculated on – what’s it like to be with a Plastic Man type?; do combatants ever get turned on as they swap buff blows in tiny costumes? Others are more surprising, including the main story of the issue, which sees a couple of members turn peeping Tom Strongs.

It’s helium-light stuff from So Super Duper writer Brian Andersen, but not without charm. While Pink Storm comes across as an immature prat due to his boastfulness and sweary gob, everyone else is worth spending a few minutes with – even super-sissy Cosmic Man who, had he the elastic powers, could call himself Nellyongated Man.

My only real complaint is that while we get brief descriptions of the power archetypes before the strip begins, we never really see much of anyone using their abilities. So, for example, I’ve no idea if Pink Storm’s super-pink skin has anything to do with his strength. or what Cosmic Man’s ‘space age cosmic powers’ are. Such details may not be necessary for the story to work, but the knowledge would certainly enrich the reading experience.

The art is handled by Neftali Centeno and is as bright and airy as the script demands. It’s obviously the work of someone starting out in comics – some of the faces are a bit off, and not all the poses work – but it tells the story nicely, being strongest in the broadest comedy moments. One thing I don’t understand is why words such as ‘cock’ are asterisked out in a comic which features much on-panel shagging (there’s a PG-rating on the cover, which seems a smidgen low).

Entertaining and undemanding, Sex and the Superhero is an interesting experiment, even if its heroes don’t have the depth to play with the big boys. Who knows, though, what future issues will bring.

2 thoughts on “Sex and the Superhero #1 review”