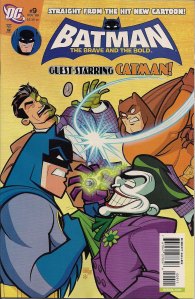 Don’t tell Secret Six fans, but here’s Catman going through a whole issue of a comic without stripping down to his tighty whities. Mind, this is a DC all-ages book and this isn’t the same version of Catman – this is a Catman who’s just starting out, and keen to get in Batman’s good graces . . .

. . . of course, whichever version of the DCU we’re in, Batman is mighty suspicious, keeping an eye on his new colleague as they fight the likes of the Joker, Two Face and, in a page I just have to reproduce, the Penguin and his sinister seals (click to enlarge):

There’s not a huge amount to say about this issue, other than it’s a fast, fun ride by Eric Jones and Landry Q Walker (creators of the superb Supergirl: Cosmic Adventures in the 8th Grade series, collected in December). They capture the flavour of the TV cartoon, right down to a pre-team-up team-up (featuring . . . nah, I won’t spoil it) and even a ‘credits sequence’. The dialogue’s snappy and fun, the art’s big and bold and there are some terrific colour effects from Heroic Age.

If only I were bright enough to understand the Riddler’s riddle when Batman explains it . . .

So, does Catman, who’s the nearest the Secret Six have to a good guy, side with the angels here? Have fun finding out.