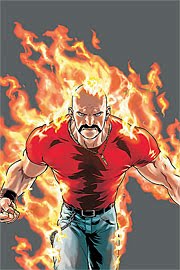 The second of four in DC’s Red Circle event, Inferno has the survivor of an explosion on an ocean liner unable to remember who he is and muttering the name of someone who seems not to exist. A flashback features a woman and someone unseen being lovingly doomy. An attack causes the mysterious chap to transform into a fiery man with a mission – but is he hero or villain?

Beats me. All I know is that he looks a tad gayer, in a butch way, and the story is set in San Francisco. Perhaps he’s the spirit of the Castro Gold’s Gym, a total flamer and a bit of a hottie? As part of the Red Circle story helmed by J Michael Straczynski, this issue pulls in last week’s one-shot star Hangman, and we’ll likely get some answers in the next couple of weeks.

Not good enough. This may be part 2 of four but it’s advertised as a one-off, so I expect a self-contained story even if it’s part of a bigger whole. And it didn’t help that Hangman stole the show, revealing more power than previously.

DC might be pleased that I’ve been left wanting more, but more than that, I’m annoyed. Twenty-two pages is enough to tell a story – the likes of Dan Slott and Keith Giffen do it all the time. JMS comes from TV, where folk have five-year plans (the slow pace of his Thor run saw me give up the book), but he showed with last week’s Hangman that he can do it. Let’s hope he does it next week.

The art, by Greg Scott and colourist Art Lyon is gorgeous, with the contrast between the bright Inferno and gloomy Hangman a visual treat. It’d be good to see these fellas work together regularly. And the cover by Jesus Saiz really captures the title character. It’s just a shame we didn’t get to know him more.

One thought on “Inferno #1 review”