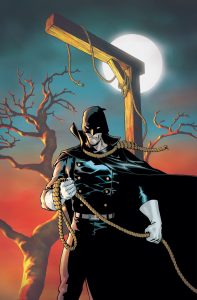 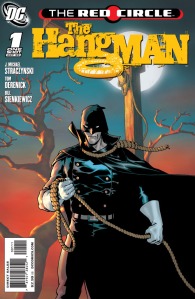 The first of DC’s latest attempt to make something of Archie Comics’ Red Circle characters and concepts, this one-off brings us the heroic origin of the Hangman, aka Dr Robert Dickering. AKA Dr Bob.

Stop snickering at the back – writer J Michael Straczynski inherited the name and deserves praise for working past the silly moniker with a straight face. Mind, he might have avoided the Muppet reference. This is an absorbing read, beginning in Civil War America, where Dickering is made a tempting offer just as he’s about to be hanged (presumably, any offer is tempting just when you’re about to be hanged). The tale then shifts to modern San Francisco, where we find that Dr Bob is the world’s worst babysitter, reading terminally ill kids the dark story of his origin. Presumably he changed the name, as The Nurse Wot Loves Him, Sarah, doesn’t offer, ‘So, you’re a supernatural hangman condemned to save the guilty and punish the innocent?’ Instead, she tries to get him to join the gang for a drink, bless.

But he has business and for Dickering, the clock’s, er, tickering. He rides into battle on a hell-horse (maybe he hides it under a gurney) and makes rather the magnificent figure, as drawn by Tom Derenick and inked by Bill Sienkiewicz. I would say sexy, but you might worry, what with his justice-seeking look involving an executioner’s mask and knotted rope at the neck. The storytelling by these boys is top notch, in a combination reminiscent of the always superb Tom Mandrake.

Providing the cover is Jesus Saiz, and it’s a lush, powerful illustration. It’s a shame the excellent logo hides an important part of the image.

The issue ends with the next one-shot star, Inferno, arriving in hospital for treatment. A gimmick for the first three Red Circle titles – this, Inferno and The Web – is that the final page of each acts as an artistic baton … the artist for the next book takes over the reins. Greg Scott’s page here is lovely for what it is, but doesn’t actually add anything new. It’s just another page of story rather than an !mpactful splash.

Never mind though, the Hangman #1 is a splendid read and I’m actually rather sad Dr Bob’s story won’t be taken up again soon. I await noose of a sequel.

2 thoughts on “The Hangman #1 review”